GroupM’s sporting and entertainment property ESP Sports released the sporting sponsorship data report of India yesterday at a media event. Vinit Karnik, Business Head, ESP Properties, GroupM took the media attendees through the report and gave us insights on the ad spends of the year.

2018 was a spectacular year for the business of sports and 2019 will be another power-packed year. With IPL being telecasted and ICC Cricket World Cup coming up, sports will be the talk of the town, monopolising consumer attention and advertising money.

Karnik started off by saying that, “It has been a cricketing year completely. On ground sponsorship has grown a very healthy 20 per cent from 30-37 crores to 1,603 crores which basically means that everything that you see on the cricketing grounds from the logos to the jerseys is included in this. However, whatever you see on Hotstar and television is not included in this.” 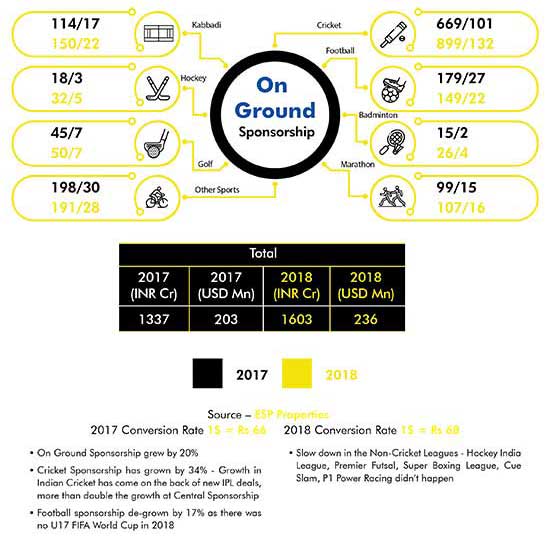 On ground, cricket alone has grown a 34 per cent which means almost a growth from 669 crores to 899 crores from Jan 1, 2018 to Jan 1, 2019. “The IPL central sponsorship has grown and 155 per cent growth rate has been seen. On the backhand of VIVO and Paytm all the deals that were renewed at a premium pricing has helped the number,” stated Karnik.

Although football sponsorship has de-grown by 70 per cent ISL, however, has not. Karnik commenting on the decline in these growth states, “It has de-grown because the U-17 world cup did not happen in 2017 so on the larger number we witnessed a slight downfall on football. However, we are seeing a drastic slow down on the non-cricket economy, that is a problem area. According to me, there are multiple reasons most of the leagues have gone the IPL route, like the eight-franchise league, franchise league, home and away. Every sport has a unique offering. Not every sport is television friendly. Everyone has gone the broadcast route. For example, worldwide boxing is a pay per view sport. There are two massive revenue models in boxing: 1. Pay-per-view and 2. Betting. However, betting is illegal in India, so we can’t talk about it. Considering the TRAI regulation it is almost Pay-per-view.” 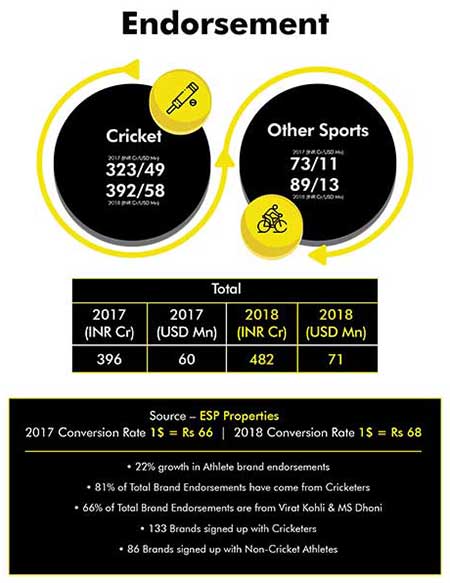 What IPL teams do now is whatever sponsorship amounts they extract, ten per cent of that revenue they give back to BCCI. “It is a royalty rather than a franchise, that money is counted somewhere, there is no difference in the industry size because we are capturing that number in that franchise fee model which will now get moved onto the sponsorship fee like gate revenue or a licensing deal. Team sponsorship revenue is up by 9 per cent cricket team sponsorship, the good part about the team sponsorship, IPL teams for the first time crossed the 299 crore mark. Which means that almost 14 crores per team are what they are possibly writing as team revenue that is a very healthy sign from team economy standpoint,” remarked Karnik. 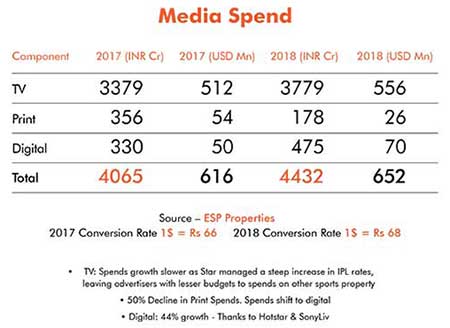 Speaking about brand endorsement and its growth Karnik stated, “Growth has been a very healthy 22 per cent predominantly driven by cricket almost 81per cent came on the back of cricketers. Virat and MS Dhoni contributed to almost 66 per cent of that 482 crore numbers which means that cricket endorsement has grown by 21 per cent. Pusarla Sindhu is another highlight star in the sports economy considering a long time endorsement. 133 brands have signed up with cricketers and 86 brands have signed up with non-cricketing athletes. There is a healthy base of advertisers investing in top sporting events.”

Sports sponsorship has grown by 12 per cent. The size of the industry is at 7,762 crores without franchise fee. “The media investment in sports grew by 9 per cent sounds a little low because India played less amount of cricket last year. 85 per cent of the overall ad spent have happened on TV. So, TV still drives the bulk of the growth story in India. 44 per cent of growth has come from digital media which is predominantly driven by Hotstar and Sony LIV and these two platforms have the best rights possible. The revenue on OTT is coming only on the backing of cricket. TV is at 3779 crores, digital is thriving at 3379 crores and print is declining with a revenue rate of 178 INR crores,” said Karnik.

On digital gaming becoming popular, Karnik commented, “E-sports and mobile gaming is seen as a trend for 2019 for us. There are no numbers for 2018. It is not only going to be about fantasy leagues and putting out 100 rupees here and winning something. It is also going to be about fan engagement. We are also evolving with this thought process.”

When asked if corporates take keen interest to invest in a sporting event, Karnik stated, “From 2008 onwards I have seen that there are some 40-50 business houses investing in the world of sports. All the team owners are eventually business families so that’s completely new money that has come into the system, completely new people that have invested in a sport as non- advertisers but investors in sports. There has been a great encouragement on the corporate front.”

Speaking about the TRAI regulations and if it will affect ad spends, Karnik commented, “It is too early, we need to start seeing the change. As of now, there is no data to support it, therefore, it is too early to speculate that.”

IPL and elections clashing will not be an issue. Karnik said that it won’t affect the world cup ad spends either since India is a cricketing nation.

Affle to acquire strategic stake in Indus OS
10 hours ago

HUL dropping ‘fair’ an attempt to change the brand DNA?
17 hours ago

Change is the only agency model of the future: Russell Barrett, BBH India
18 hours ago