As the OTT industry continues to grow, digital rights for films have prominently figured as a source of revenue generation

When Bollywood superstar Salman Khan’s production house struck a 5 –year, multi-crore deal with Amazon Prime video for exclusive rights to stream his movies on their platform post its theatrical release, the message was loud and clear- movie consumption habits of the Indian consumer was witnessing a shift and the film industry was in no mood to be left behind.

Underlining this trend the 11th edition of KPMG Media & Entertainment report 'India's Digital Future: Mass of Niches’, states that a key ongoing change in the film industry “has been the growing contribution of digital rights, which has grown by 30 percent in FY19 in line with the previous year driven by heavy demand by OTT platforms who consider new movies as a key differentiator. Additionally, with a growing emphasis on regional audiences, OTT platforms are also investing in building regional libraries.”

The past few years have seen the number of OTT platforms multiply, from 9 in 2012 to over 30 in 2019 and that number backed by affordable data has seen an explosion of video consumption by consumers. Movies are a large part of this video consumption that is now available, on OTT platforms shortly after their theatrical release, much to the consumer's delight.

Revenue generated from theatrical releases still forms a large chunk of films’ earnings, followed by cable and satellite rights, however, the past year has seen digital rights for films figure prominently as a source of revenue generation. According to the KPMG report “The economics of film production has undergone an overhaul as digital rights have tilted the dynamics of film making in favour of production studios”.

Movie releases on television have always been a big draw for audiences but with OTT platforms playing disruptor, the question that is often asked is whether the two can co-exist? In fact, the report has pointed out that the pricing of cable & satellite rights is expected to undergo adjustment due to the impact of OTT platforms.

Explains Aparna Acharekar, Programming Head, ZEE5 India, “Movies are huge viewer/subscriber acquisition drivers for both TV and OTT. The current trends show that there’s an exponential rise in digital consumers consuming content online. India is a country driven by family viewing and this reflects in the increased number of TV households. And digital video streaming players only compliment it in all ways than one. Since we are a broadcaster-led OTT, we bring in network strength to movie acquisitions in terms of value and reach. The fact that TV viewership continues to grow along with this multifold increase in digital consumption, clearly suggests that TV and Digital video will co-exist.”

To get an understanding of how serious the OTT industry is about its investments for both Bollywood and regional cinema, the report further explains how OTT platforms are investing heavily in acquiring film libraries, for example Amazon Prime acquired the digital rights for 12 films out of the highest 30 grossing Hindi films this year, followed by Netflix which acquired 9, ZEE5 acquired 8, Hotstar 3 and others 2. 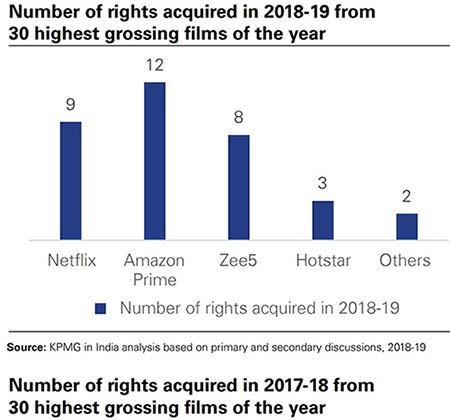 Quality content being churned out from the film factory has kept the box office cash registers ringing the past year and the outlook for the year ahead, according to KPMG report, too remains positive especially with big releases such as ‘Avengers Endgame’, ‘Bharat’, ‘Kabir Singh’, ‘Super30’, multi-lingual ‘Saaho’ having being lined-up in the first half of the year itself.

In the early years of the OTT, digital rights for movies were taken lightly and not seen as serious revenue generators but over a period, especially with international players like Amazon Prime and Netflix pumping in huge sums of money to add to their movie libraries, the game changed completely, explains Vishal Chinchankar, Chief Digital Officer, Madison World, "The consumer viewing habits have changed and digital service providers - from Netflix to Hotstar - are bombarding users with movies, original videos-on-demand which is led to premium pricing for the production houses. Traditionally, satellite and digital rights were sold to a single channel at combined pricing, however, post-Amazon Prime and Netflix entering India, the digital rights are sold at a premium. What's mentioned in the KPMG report holds true, as sooner or later the cost of digital rights may get closer to satellite rights with the explosion of data and smartphones in India.”

Experts agree that as the OTT industry grows in strength and numbers, digital pricing will see an upswing, the benefit of which will be shared by both the production houses and OTT players.

Says Film Trade Analyst Girish Johar, “First of all, it benefits a lot of producers as well as production houses, because now you have an ample opportunity to produce great content and there is a larger revenue share, which is increasing. So a digital right or an OTT platform right is also giving them substantial revenue. It's a new opportunity, which was there earlier, but nowadays it is at a more mature stage. And in terms of benefits to OTT, obviously more people are logging on to them, they are also seeing an increase that is why it’s a complete demand and supply match.”

Competition for digital rights for both Bollywood and regional films is likely to get more aggressive as OTT players try to outbid each other to acquire movie rights. For now, the production houses are laughing all the way to the bank as the digital subscriber base grows. The next big disruption lined up through the Internet pipe is Reliance Jio’s ‘First Day First Show’, the impact of which all stakeholders are waiting to see with bated breath.

Believe in organic growth in news while ratings should be a by-product: Sudhir Chaudhary
16 hours ago