With the first-of-its-kind Picture in Picture innovation in Indian sports broadcast during the Roland Garros for Renault, Star Sports has opened a world of incredible possibilities for advertisers

Over the years, live sport broadcasting in India has scaled new heights and hit new benchmarks, offering viewers new and thrilling experiences that make for compelling viewing. This is exactly why marketers view sports events as an excellent platform for new product launches, important announcements and campaigns. The leader in live sports broadcast, Star Sports, in its constant endeavour to raise the bar for viewers and advertisers, recently unveiled a new innovation during the recently concluded Roland Garros – the Picture in Picture (PIP) ad technology. The PIP offering in live sports is a revolutionary one, which has never been done by an Indian broadcaster before. This new ad technology allows an advertiser’s commercial or promo to be played during live broadcasts, when the ball is not in play.

Despite not being an actual commercial break, it provides unparalleled commercial stimulus during a live game that is non-intrusive.

Auto major, Renault India was one advertiser that successfully leveraged the PIP innovation during the Roland Garros, thereby not just offering viewers a heightened experience but also taking its brand visibility several notches higher. The car maker, which was also the presenting sponsor for the tournament, was quick to spot this as an unmissable visual treat, ideal to showcase its product finesse during relevant moments in the game, juxtaposing it against the iconic Roland Garros clay court. The new advertising technology thus became almost a natural extension of Renault’s own legacy and passion for creating experiences through disruptive technology. Star Sports also created a co-branded promo film to showcase Renault India’s brand and its association for an absolute visual treat.

Speaking about the brand’s partnership with Star Sports for the tournament, Hardik Shah, Lead, Marketing Communications, Renault India Private Limited (RIPL) states, “Roland Garros is a premium partnership through Star Sports for us, broadly for two reasons. The first is that it resonates directly with Renault Kiger’s brand position of being sporty, smart and stunning, a pure reflection of tennis as a sport. The second is that the presenting sponsorship was offered for the first time ever (we always had been Co-Sponsors and Associate Sponsors), and this gives us complete ownership of the property with various special segments that were created solely for Renault such as Aces of the Day, best moments of the week, etc.” The other differentiator that created true impact was the clutter breaking PIP innovation, adds Shah, explaining how the brand leveraged the new technology with a subtle association promo. “The most special is the PIP innovation, being done for the very first time in India with live content. It helps break clutter, makes us stand out on live content, and builds association with the product (tennis), which usually is not offered in other premium sports. Though this is a classic advertising route, it puts across the message in a very subtle way without disturbing the audiences. If you have noticed, Renault India has not played a quintessential TVC in the PIP. Rather we chose to air an association promo that strengthens our relationship with Roland Garros and tennis as a sport overall through Star Sports,” Shah points out.

Renault India’s impactful use of the PIP innovation during the French Open demonstrates how brands can successfully capitalise on such breakthroughs even in future tournaments. Star Sports is already preparing to replicate its success in upcoming marquee tournaments such as Wimbledon later this month and the English Premier League in August, thereby presenting a wide range of opportunities to advertisers who are looking to garner maximum traction from their audiences. At a time when consumers are seeking ways to skip ads, this innovation provides a superlative viewing experience with minimal disruption. Through the clutter breaking PIP technology, Star Sports has introduced a sophisticated, effective innovation for advertisers that could potentially transform the way brands leverage a live sports broadcast. It will be exciting to see how advertisers bring their A-game to these upcoming live sporting events on Star Sports as they leverage the revolutionary PIP technology. 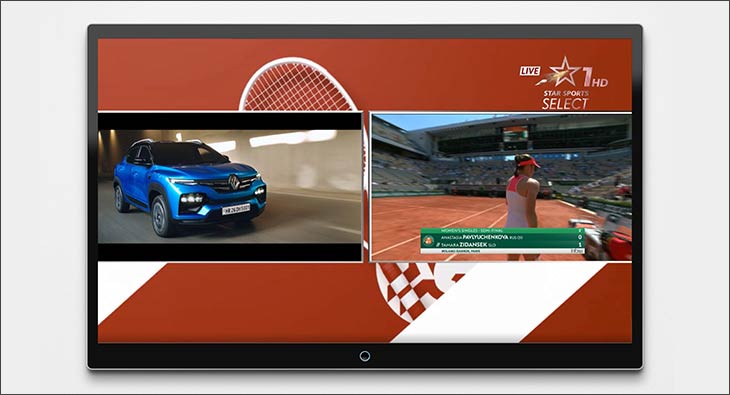