Election 2019: From Game of Thrones to Avengers, memes take over social media

From characters and situations, Avengers: Endgame and Game of Thrones, to Malayalam movie Lucifer, all are being used for creating memes/trolls in social media

With the Bharatiya Janata Party (BJP) with 300+ seats emerged as winners in the 2019 Lok Sabha Elections, social media platforms have been flooded with funny memes and videos related to the election results.

The growth of digital media has kept the elements of humour and wit alive among Indians. During the electoral campaigning period, to the poll result day, social media has been flooded with hilarious memes and trolls. From characters and situations, Avengers: Endgame and Game of Thrones, to Malayalam movie Lucifer, all are being used for creating memes/trolls in social media. 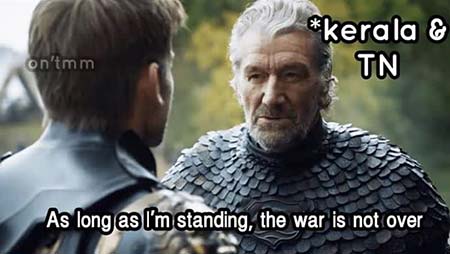 A meme which portrays Narendra Modi as Thanos from the Marvel Cinematic Universe is trending on the social media platforms. The Game of Thrones characters such as Jon Snow, Arya Stark, and Emilia Clarke are also being used for churning out memes.

After defeating Rahul Gandhi in Amethi, memes with Smriti Irani being referred to as Arya Stark (a character from Game of Thrones) are also trending in the social media

In South India, particularly in Kerala, where the Left Democratic Front who are in power in Kerala could bag only one seat in the Lok Sabha polls are the topic of hilarious memes and trolls. A video byte from the movie Sandesham, which is considered to be one of the best political satires in Kerala is making rounds on WhatsApp and other social media platforms.

The scenes from the latest movie Lucifer where actor Mohanlal is seen riding a bike and performing stunts were used to create trending memes. In Tamil Nadu, hilarious comedy scenes from movies are also used for trolls and memes.

Community Marketing in Facebook Groups - A Complete Guide
3 hours ago