e4mSpotlight: Cannes We Do It Again?

India won 40 metals last year at Cannes Lions. There is immense pressure on agencies to maintain the momentum this year

All eyes are on the Indian advertising fraternity to shine bright at the Cannes Lions International Festival of Creativity 2018 following its record-setting performance last year. In 2017, India had a record haul of 40 Lions including a Grand Prix and a Glass Lion.

This year Indian agencies have nominated a total of 979 entries in all 26 categories across 9 tracks. The Indian contingent has been consistently consolidating its position in the global arena picking up more Lions every year growing from a meagre 13 in 2015 to 40 last year. Last year India sent 1,227 entries and had a conversion rate of 3.26% up from 1.26% in 2015.  Indian agencies are therefore under immense pressure to keep up this momentum in 2018.

Assessing India’s strengths and weaknesses, Rajni Menon, CEO, Carat India, says, “We have definitely come a long way with increasing number of metals over the last few years. But it is far from the levels that we would be inspired by. We are far stronger in the creative sphere.” 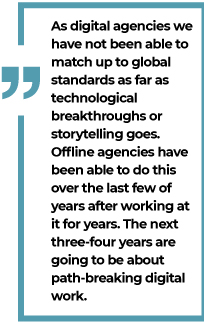 Indian ideas are yet to impress juries in the Mobile, Cyber, Innovation, Entertainment, and the ultimate Titanium Lions. JWT India won India its first Mobile Lions for the Nike Film ‘ Make Every Yard Count’ in 2014. But there has been a lull ever since.

Shamsuddin Jasani, MD, Isobar India, believes that 2018 may be the year the India makes a mark in the digital-led categories. Jasani’s agency is participating in the award festival for the first time this year. He says, “As digital agencies we have not been able to match up to global standards as far as technological breakthroughs or storytelling goes. Offline agencies have been able to do this over the last few of years after working at it for years. The next three-four years are going to be about path-breaking digital work.” Jasani feels that a lot more digital agencies are now confident about creating Cannes Lions-worthy work and that is visible in both the execution and more importantly from the strategic standpoint.

Year after year, India impresses the jury with its social campaigns. A testimony to this is the fact that Indian agencies have won the Glass Lion every year since it was launched. Sumanto Chattopadhyay, Chairman & CCO, Soho Square, identifies India and its vastness and problems as reason for this strength. “Ad agencies, of necessity, learn to handle campaigns that touch millions. As a less developed nation, economically and socially, we also have more than our fair share of problems to be solved,” he says.

That said, it is hard to not be cynical. Westerners associate India with misery and campaigns that tap into that tend to fare better with certain juries. And it is for this reason that Chattopadhyay says, “India will come of age at Cannes when large numbers of our mainstream ad campaigns that have nothing to do with 'misery' -- ie, with solving problems, social, economic or otherwise -- will get awarded there.”

Where India Misses Out

Senthil Kumar, CCO, JWT India, identifies one of the factors holding back Indian ideas is execution. “While our ideas are as good as any others, sometimes we do fall short on the execution for various reasons like budget constraints, technology support constraints and epic scale,” he says.

One of the biggest drawbacks with India’s entries at Cannes Lions is the packaging of case studies. “It’s important to package an idea and push it from good to greatness with a stunning case study that brings the idea alive beyond the advertising and evokes a more unanimous and universal response from the global jury that is made up of all nationalities,” Kumar says.

Menon finds that LATAM agencies are doing a far more focused and superior job at creation of case studies than India. “When you have hundreds of entries to review the case study film is the key component,” she says.

Case studies are especially important because many entries sent are in Indian languages and the creators have to depend on subtitles and hope that nothing is lost in translation. “Creative people have to invest time, effort and money in packaging every idea into a mind blowing case study that cuts across all barriers of language and regional sensibilities. When you are hunting for a Lion in Cannes make sure the intent of your idea is captured in the content of your ammunition,” says Kumar.

This year 10 of the 413 jurors are from India. In 2017, 12 of the 390 jurors were from India. A jury that is predominantly Western misses the cultural nuances and sensibilities and that’s where an Indian campaign may miss votes from an international jury. Can a better representation of India at the jury solve this problem, we wonder? “It's a chicken and egg story, actually. It's usually those who win at international festivals that get selected to be on international juries,” says Chattopadhyay.

The winning mantra is very clear to Kumar- improve execution, keep it Indian. “I would always encourage my team mates and other Indian creatives to be more Indian in their work and take a leap from strong Indian insights and unabashedly push for Indian styles of execution because that gives us the best chance of standing out in the global clutter of Advertising. We can’t hope to win any metal by trying to ape the west or the far east. They will tell you before you start that it’s been done and how. The world wants to see more original Indian ideas and not cheap remakes of last years winners,” he says.

Infectious Advertising assigned the creative mandate for Ebco
8 hours ago

Celebrity endorsement in times of social media: Will we see brands shying away from stars?
17 hours ago