Appy Fizz aims to connect with consumers through OOH

With marketing spends of Rs 75 crore, Parle Agro has adopted a hyperlocal marketing strategy with various initiatives to further connect with the consumers across India

Parle Agro, the largest Indian beverage manufacturer recently went all out to promote their fastest growing brand, Appy Fizz through the OOH medium. The new campaign urges consumers to #FeelTheFizz by rising up and following their passion. With marketing spends of Rs 75 crores, Parle Agro has adopted a hyperlocal marketing strategy with various initiatives to further connect with the consumers across India.

We spotted multiple outdoor advertising of Appy Fizz in Delhi-NCR including metro wraps. The brand has recently roped in actor Salman Khan as their brand ambassador, and Khan has been featured on all brand mediums including Television, Print, Digital, and OOH.

Talking about the campaign, Nadia Chauhan, Joint MD & CMO of Parle Agro says, “Having created the segment of Sparkling Fruit Drinks and continuing to have a monopoly in the segment - Appy Fizz is a brand that's been growing at over 60% across urban and rural markets.

Targeted at the youth, Appy Fizz’s campaign with Salman Khan urges people to rise up and feel proud about standing apart from the crowd.”

Chauhan added, “Appy Fizz is already a market leader, but the campaign seeks to further boost visibility and sales for our brand, in addition to enhancing the top of mind brand recall among consumers. With our 360 campaign #RiseUp, the brand aims to speak out to the young consumers.” 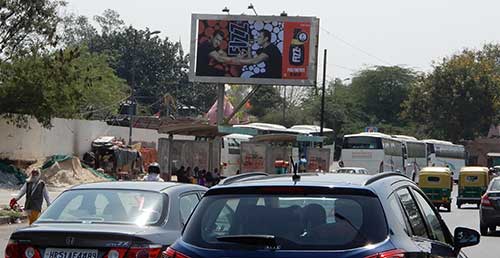 Appy Fizz, this year has commenced its marketing campaign starting from March and further continuing its communications throughout the year.

“We have adopted a hyperlocal marketing strategy to further the brand connect with consumers across India. We’ve allotted 75 crores for Appy Fizz marketing this year. The brand ethos of Appy Fizz – young, bold and contemporary – is definitive of today’s millennial Indian consumers that this campaign seeks to target,” Chauhan added.