From co-branding Delhi Metro stations to wrapping the entire train, OOH gets creative

The rapid expansion of Metro Rail in Delhi has proven to be a boon for OOH industry. As metro rail is getting deeper into the city, it is deriving new ways of generating income beside ticket sales. Right from co-branding stations to wrapping up the entire train, Delhi Metro Rail Corporation (DMRC) is using every way possible to attract advertisers.

As of now Delhi Metro has 236 stations and operates approximately 4000 trips per day. Around 2.5 million people board a metro every day for their commute.

Charanjeet Arora, CO-CEO- India, Kinetic India shares, “DMRC is a large media where you get details on number of commuters, male-female spilt, age group, which is a big advantage to any brand and these numbers help brands to reach out to the ROI on the investment they make. Retail spaces are increasing which gives brands opportunity to engage with target audience for a higher duration and then we also have branding options inside the metro rail. On this media, brands get captive audience for the time they are traveling, so to me it’s a great opportunity for brands to engage with target customers while they are on the move in a controlled environment.”

The advertisers get direct access to their consumers considering the eye level panels placed, higher dwell time and easy readability in a captive atmosphere. 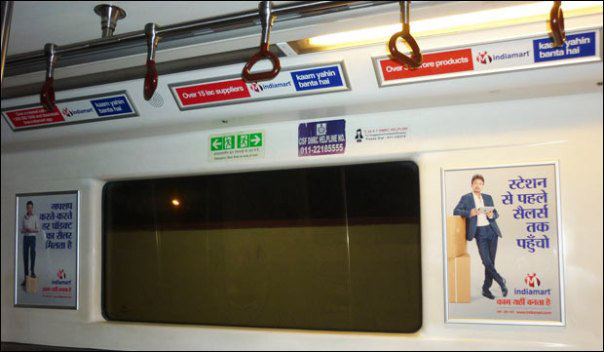 According to Alok Gupta, Director, Graphisads Pvt Ltd, “Metro is a decent media opportunity and caters to around 15 per cent of Delhi/ NCR’s population. Eventually the population using Metro also has to travel outdoor to go to their homes! Just using the logic that ‘we have the numbers’ one cannot defy common sense of 15 per cent of Delhi vs Complete Delhi. If planned and executed well, campaigns can be done across Delhi at the same cost as metro rail. The costing is also not really economical in nature. Clients are taking internal media, targeting 15 per cent of population at Rs 800-1000 per sq ft, whereas external media (except south Delhi) is available between Rs 400-700 per sq ft. targeting 100 per cent population.”

Anjum Tanwar, Vice President, Brandscope (A part of Posterscope India) believes there aren’t any major hurdles being faced, while executing a campaign, “Certain challenges pertaining to power block permissions from DMRC which takes time, if any media panel needs to have advertisers creative. Other than that there are no challenges as such.”

Whereas Atul Shrivastava, Group CEO & Director, Laqshya Media Group said, “The challenges like restricting the operations activity like mounting the flex to a specific time restrict our delivery as an agency. And, sometimes adhering to it during strict campaign duration becomes difficult. The Corporation is also very particular on the creative that gets exposed during the campaign, which therefore needs to be approved prior to the campaign going live.”

These days we are seeing some beautiful and colourful metro stations from outside. The newly opened South Extension and Bhikaji Cama Place station in the Pink Line is already grabbing many eyeballs. DMRC has partnered with Titan and Gail India for the respective stations. The stations are being given a different look with prominent space to advertisers for their product branding. In the last few years, co-branding has come out as a new hit in the metro connectivity.

“Co-branding is a good opportunity. Some brands have exploited it well. These stations add to city's ambience and look great, however, there is a need to judiciously spend because after some time it becomes a blind spot for commuters,” explains Gupta.

Adds Shrivastava, “Other than Co-branding, a lot of premium brands are also opting the civil structures (i.e media assets like Bridge Panel) right outside the Metro Station as they cater to a very desirable TG of millennials.”

Arora further shares, “Also, naming rights of the trains could be another option and branded announcement inside the train.”

Metro as a big hub for OOH medium

The marketing campaign is found to be effective when it targets the relevant audience. Seeing the widespread network, metro stations mark as an important inventory for an OOH marketing plan.

“Metro is emerging as the second most important format in the transit media category. The major advantage of Metro media is the dwelling time inside the metro train as well as stations. There's decent demand for this media from clients in certain categories like Retail, M & E, etc. However, despite the huge potential that this particular form of infrastructure holds, just depending upon the metro rail without an overall plan would not make any sense”, reveals Tanwar.

On the other hand, Arora believes, metro stations will become like airports with increasing affluent population travelling in DMRC. “It has become a point of convenience for commuters but, DMRC should increase the retail space at metros to make it more engaging for commuters to spend more time in the premises,” he explains.

He also added, “DMRC and media owners need to invest jointly to give more confidence to our brands in giving more data as to how brands can benefit from the travellers’ profile using Metro.”