Among the parties, BJP garnered 51% of the share of voice on Twitter while Congress took 42%, and Janata Dal (Secular) had 7% of the mentions.

From breaking news to behind the scenes action, political parties, candidates and citizens sparring over hot election topics, Twitter emerged as the best place to catch all the action on the recently concluded #KarnatakaElections2018.

Despite the fact that the elections occurred in one state, discussions on Twitter were vibrant all over the country and even overseas.

According to Twitter India, throughout the campaigning phase of the Karnataka elections, politicians and parties took to Twitter to regularly communicate with people all over India.

Among the parties, it was a close fight in Karnataka as BJP (@BJP4Karnataka) garnered 51% of the share of voice on Twitter while Congress (@INCKarnataka) took 42%, and Janata Dal (Secular) had 7% of the mentions. 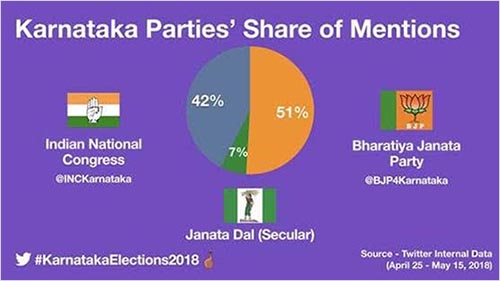 While the political leaders and parties were active, Twitter users also participated in dynamic conversations around the Karnataka elections with relevant hashtags and retweets. #KarnatakaVerdict emerged as the most talked about election-related topic in the past 24 hours. The most used hashtag across the elections from Apr 25 - May 15, 2018 was #KarnatakaElections2018. 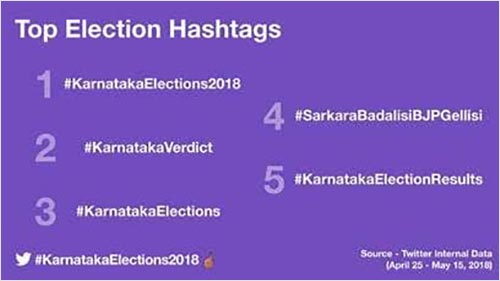 Top 10 Retweeted Tweets in relation to the Karnataka elections:

You talk a lot. Problem is, your actions don’t match your words. Here's a primer on your candidate selection in Karnataka.

It plays like an episode of "Karnataka's Most Wanted". #AnswerMaadiModi pic.twitter.com/G97AjBQUgO

I challenge you to speak about the achievements of B S Yeddyurappa’s Govt in Karnataka for 15 minutes by looking at a paper.

Urging my sisters and brothers of Karnataka to vote in large numbers today. I would particularly like to call upon young voters to vote and enrich this festival of democracy with their participation.

The Democracy being attacked in Bengaluru . I am shocked at the incident . More than 20000 Voter ID cards found at private apartment . I visited the place personally . This mockery at behest of @INCIndia Rajarajeshwari Nagara Candidate Munirathna Naidu #congresscheatsdemocracy pic.twitter.com/fZHzgbcOio

My prediction for Karnataka: BJP 115-130. JDS second and Congi third

Today, Ms. Antonio Maino is here in K'taka to save her last citadel from falling!

Madam Maino, K'taka needs no lessons from the person who was solely responsible for wasting India's 10 precious years.

And to Congress, need to remind you of your 'import' jibe? https://t.co/7NmhjuoMOM

In Karnataka, TDP n Chandrababu Naidu have used all tactics to dissuade Telugu voters from supporting BJP. But in Hyderabad Karnataka where most Telugus live, BJP has increased its tally from 6 to 20+. People have rejected CBN’s politics. Our Southward March has begun.

Same girl, one voter ID in Karnataka, another in Kerala Another feather added to #fakeidcongress ... People of Karnataka will give a befitting replay for this fraud by @INCIndia #ShameOnYou pic.twitter.com/LsAne4wnsz

Waiting for our turn to vote! Urging everyone to exercise their rights as citizens! #KarnatakaElections2018 pic.twitter.com/O30QqqZlxW

This is depths that @RahulGandhi n @siddaramaiah will stoop to ! ??

Talking about the trends, Mahima Kaul, Head of Public Policy & Government, Twitter India, said, "Twitter is where political conversations happen and where you can see all sides of a conversation when it comes to elections. Candidates and political parties have been responding to each other directly on Twitter, while voters have had a front-row view to digital campaigning in this state election. Over the past few weeks, our data shows more than three million Tweets related to the Karnataka elections, making it one of the most talked-about state elections on Twitter.”

Launching several initiatives for Indians to provide real-time updates on the campaign trail, connect voters to politicians on the most important election issues, and to have their voices heard during the #KarnatakaElections2018, Twitter gave front-row access to users in India and across the world to see every side of the conversations.

“People will only remember you if you stand with them “ @ashwinmahesh puts forth the voter’s perspective #KarnatakaElections2018 #ElectionsonTwitter ??

#ElectionsOnTwitter when candidates get less than #nota they will wake up. It is also exercising your franchise. - Santosh Hegde

#ElectionsOnTwitter - “if criminality and corruption is not an issue, then what is an issue?” asks Santosh Hedge in a panel on electoral activism with @RevathyAshok @MirchiRJSmitha & @anjali_WFR pic.twitter.com/VAaTJgtCVc

We work like a startup, built on volunteers at our social media cell. "Young intellectual warriors" are given great autonomy at @BJP4India @tejasvi_surya joins the conversation to add spice. @aiyshmahadev @MCABBAS @misskaul #KarnatakaElections2018 #ElectionsOnTwitter

By 2030, nearly half of FB’s staff is likely to be working from home: Mark Zuckerberg
14 hours ago

PSUs, corporates should connect with customers through effective advertising: PHD Chamber
13 hours ago

How brands can break the COVID-19 clutter
18 hours ago

Ambient DOOH will be a key point of communication post lockdown: Industry experts
19 hours ago

We expect alcohol demand to pick up, but gradually: Vineet Agrawal, Jack Daniel’s India
19 hours ago