Digital likely to overtake Print in Sports Media Spends in 2018

The data from the report shows sports adex on TV is largely on cricket with other sports contributing a minor share. Another reason for increase in sport adex was the increase in annual ad rates especially on IPL.

The data from the report shows sports adex on TV is largely on cricket with other sports contributing a minor share. Another reason for increase in sport adex was the increase in annual ad rates especially on IPL. On the other hand, print adex saw a slow growth in 2017 and this impacted sports adex as well. With more advertisers on sports turning to digital, print has seen a steady decline. In 2017, the print declined from Rs 874 crore ($128 million) to Rs 356 crore ($54 million). Whereas on digital, spends growth has largely been on the back of cricket with other sports contributing to a smaller share. The digital adex grew from Rs 270 crore ($40 million) to Rs 330 crore ($50million).

Vinit Karnik, Business Head, ESP Properties said, “I was not surprised with the television numbers because that is the biggest chunk and that's the story worldwide. The interesting point was the digital vs print contribution towards media. The gap between the two is only coming closer. The days are not that far, possibly in the year 2018 you will see digital numbers crossing the print numbers.” 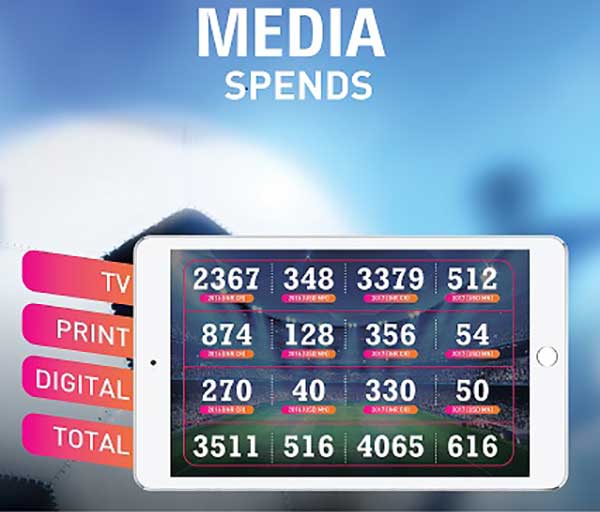 Digital viewership of live sports events saw a huge growth after the entry of Hotstar in 2015. Viewership of IPL grew from 28 mn viewers in 2014 to 100 mn in 2016, a growth of 2.6 times. As per Hotstar’s ‘The India Watch Report 2018’, ODI matches saw a 5X growth in watch time between 2017 and 2016 while IPL 2017 witnessed 6.6X growth, Kabaddi 9X growth, opening days of Indian Super League 3.5X growth and opening days of Premier League 10X growth. In line with the explosive growth in digital viewership, sports ad spends have grown from negligible in 2009 to 18 per cent of overall digital spends in 2012 before stabilising at 8-10 per cent over 2016-17. RJio’s entry Sep-16 helped increase time spent on digital as data plans became cheaper and connectivity speeds improved. Karnik said, “Today digital is pushed by the live sport. That’s what is ticking the envelope today but I believe the emergence of non-live events will add to that ticker to give growth. So live is the current trigger and we believe that non-live could be the next growth driver.”

He further added, “On the non- live event side, we have many digital assets today inside RCB or KKR and Mumbai Indians so all these are monetising. They are slowly picking up. Live events will be more than a non- live hence sports will become popular, which will result in more live sports.”

According to the report, the overall sports sponsorship in India grew by 14 per cent in 2017. Talking about the report, Karnik shared, “The growth story in Indian sports still continues. The growth story in emerging sports is still healthy. Digital is pushing the envelope from the advertisers’ interest. If you look at the media spends numbers, digital is very close to print. We are not a sporting nation yet, let’s celebrate cricket and the whole point about we being a new kid on the block, just ten year old economy, but pushing the envelope to one billion mark is quite significant.”

digital All you need to know about ONDC
11 hours ago

digital Crypto downturn: How big is the impact on ad budgets?
22 hours ago