Stranger Things, a popular Netflix show, aired its third season this July. There were a lot of brands like Coca Cola, Burger King and Smirnoff integrated into the show seamlessly. Continuing with that trend, Samsung roped Millie Bobby Brown (who plays the character ‘Eleven’ on the show) in their latest ad.

The new digital campaign rolled out by Samsung, #TeamGalaxy, featured the Netflix star Millie Bobby Brown, virtual influencer Lil Miquela, 2-time Grammy-nominated DJ and producer Steve Aoki and professional gamer Ninja. With a power-packed cast filled with celebrities and influencers in the ad film, the ad is bound to grab eyeballs and instill brand recall. The ad film was conceptualized by the agency, We Are Social Australia.

We spoke to industry experts as they share their take on the Samsung ad film, ‘#TeamGalaxy’.

According to Raghu Bhat, Founder & Copywriter, Scarecrow M&C Saatchi, the most striking thing about the ad is the casting. “Millie Bobby Brown is also a good fit for the brand message as she is young, successful and always pushing the limits. ‘Do what you can’t’- is a smart line that stays with you”, says Bhat.

Sharing his views on the ad film, Kiran Khalap, Co-Founder and MD, Chlorophyll said that Samsung has been very astute in appropriating global brand status to outgrow its source country of Korea. “Samsung’s first big initiative was sponsoring the Olympics as early as 1988. They will continue until 2028. Using Millie Bobby Brown is one more tactic to stay relevant to a GenZ consumer. She is one of the youngest to win an Emmy, youngest to be appointed UNICEF Goodwill Ambassador despite a hearing problem. She connects well with ‘Do What You Can't’, which is what Galaxy wants to stand for”, shared Khalap.

Commenting on the ad film, Ashish Makani, Co-founder & Managing Director, Makani Creatives said, "Millie, an iconic actor appeals to millennials across the world". He added, “She has managed to rub off some of her appeal onto the brand, making it part of the larger global conversation about 'empowerment'. This moves the brand forward from just being a consumer brand to becoming a brand with a purpose; a reason for the brand to exist.”

Talking about brand recall Makani stated, “Brands that have a purpose always tend to appeal more to it's the audience as it connects with them at an emotional level, and this connection with the consumer is what instills greater and more powerful brand recall than brands that only work on volume and repeats for Top-of-mind recall. That coupled with an iconic youth ambassador is what helped Samsung hit home.”

“Most cellphone manufacturers keep harping on product features, Samsung has managed to bring the focus back on the brand. All in all, Samsung is not trying to sell you a phone, rather, it is empowering you to #DoWhatYouCant”, shared Makani.

Commenting on the ad film, Vignesh Iyer, Executive Creative Director, Langoor Digital stated, "The ad is definitely a welcome change from stylised Galaxy phone shots and formulaic imagery of Millenials in action. As expected from Samsung, the visual aesthetic stands apart. Millie Bobby Brown will appeal to the Netflix watching crowd, and what she says in the ad ticks all the aspirational boxes of a millennial. Using Millie as an influencer is a good choice as Samsung seems to have lost its lustre lately against other cooler kids on the block in terms of feature-packed, value-for-money smartphones."

Iyer added, "The ad will no doubt deliver what it should to repeat TV impressions. But it remains to be seen if Samsung can maximise the potential of #TeamGalaxy as a concept. This will require more made-for-digital content featuring Millie and the other influencers in #TeamGalaxy."

Lastly, Ankit Nalotia, Founder, Mo Mantra says that it's easy to guess why Millie Bobby Brown has been chosen as Samsung's brand ambassador. “Millie’s acting in one of Netflix’s most well-loved shows, ‘Stranger Things’ has made her a favourite in every millennial’s book. Most of the younger generation like to change their phones every couple of years, and the inclusion of a young Netflix star could greatly boost Samsung’s chances of reaching out to a wider audience. In my opinion, the TVC does bring forward the fun-loving aspect of Millie yet maintaining the brand requirement. We see Millie clicking pictures on her Samsung phone and watching videos, which does subtly highlight the product. As far as I think, the TVC is a very modern and catchy advertisement using a young Netflix star to advertise their merchandise”, commented Nalotia.

However, Nalotia suggests the brand to focus on the actual product as well so that the intention behind the ad is not lost.

Even Bhat shares the same sentiments he says, “Since the ad doesn’t carry the burden of explaining the features, the storyline could have been more creative.”

MPEG-4 slot auction: Will high cost and lack of clarity keep broadcasters away?
5 hours ago 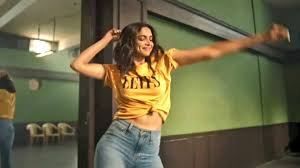 advertising Levi’s plagiarism row: How not to overstep the inspiration mark
4 hours ago