Digital is an interesting place to market our content too: Devika Prabhu, Disney India

Since digital is a huge part of the future, it's interesting to note how even a traditional medium like television is using digital as a medium to communicate with it's core target audience.

Disney India is extensively promoting it's upcoming animated series Simple Samosa across digital platforms but primarily on Disney’s YouTube channel which has over 685K subscribers along with Facebook (3.8 M) and Instagram (70.2k).

Devika Prabhu, Executive Director, Content and Communications, Media Networks, Disney India, said, “Our on-air promotion began a month ago. On off channel marketing, we are looking at the digital campaign this time around. Increasingly, we find that kids are consuming content on digital, therefore it becomes an interesting place to market our content too.”

Produced by Ice Candy,  Simple Samosa is a show where all the characters are various items of food. While the show will be telecast from Monday to Friday at 12.30 pm, Disney’s programming strategy has been to ensure that kids can experience the show anytime they want to tune-in. Dabur has come on board as the presenting sponsor.

The show will be launched in four languages including English, Hindi, Tamil and Telugu. “We are launching the show mid-summer; wanted to focus on creating awareness and create affinity for the characters with a month long promotional campaign," said Prabhu.

The channel also planning to launch game based on the series which will be launched on May 14. “The idea is that kids should have multiple touch points for the show. You can see the show on air, play the game, watch on digital. Kids can really fall in love with each character they interact,” Prabhu added.

Online video streaming has been like a wildfire, giving a powerful choice to consumers to watch content whenever and wherever they want to watch it. In the past, Sony Yay, Discovery Kids others too have tied up with online streaming platforms for streaming  kids content. Prabhu believes that digital and television will complement each other. “There is enough content for everyone. If you see the viewership on linear TV, it is as healthy as ever. It's more complementary at this time. We haven't explored marketing on digital and this is exciting for us do for the first time for kids. We will available on the pages and sites they are comfortable with.”

Talking about the spends, Prabhu did not give exact numbers but said it's a healthy spend for Disney India.

According to BARC, kids as an audience i.e. the age-group of 02-14 years, accounts for 20 per cent of total TV impressions. This is the highest share across all age groups. Summer, understandably, is the key time for kids genre as it is when the young spend more time at home watching TV during vacations. This also explains why kids channels come up with special summer programmes.
·
“We have been producing local animated series for a while now but what really interested us with this concept was that for the first time we are exploring a different world. We have summer packaging, which we started a month ago, which also features Simple Samosa. In summers we change the look and feel of the channel around a certain theme. Also the ad rates for summer packaging is in line with the viewership," said Prabhu. 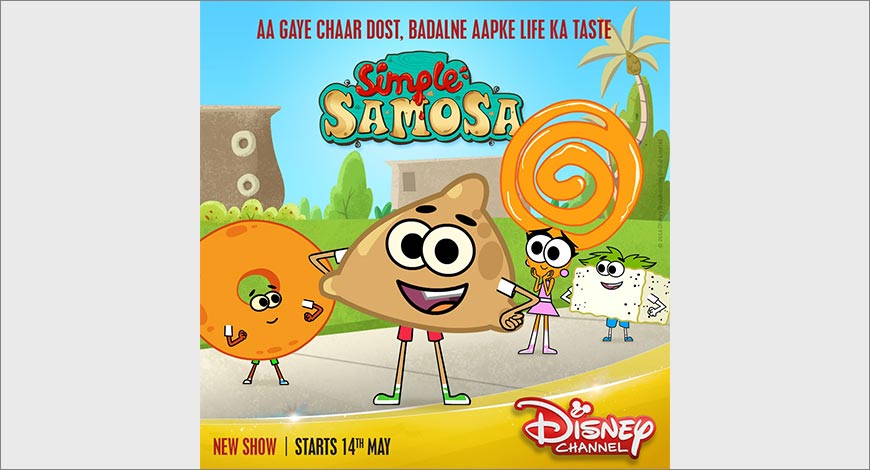 IBF: Stopping government ads on TV will kill the sector
16 hours ago

Marketing & collaboration guidelines for brands, media and influencers during COVID-19
15 hours ago

IBF: Stopping government ads on TV will kill the sector
16 hours ago

The key is to find an intelligent way to retain communication with consumers: Ajay Gupte
1 day ago

Bhupendra Chaubey moves on from CNN-News18
5 days ago

Week 13, a blockbuster for DD: Zapr report
3 days ago

Amul has been able to keep it going despite COVID-19 challenges: R S Sodhi
6 days ago