The one thing we got right is the name of the company: co-founder, FoxyMoron

As the agency completes 10 years Suveer Bajaj talks about the future and if he plans to sell the agency.

In 2008 when digital was hardly one per cent of the ad pie, four 19-year-olds started their own venture and took up all the odd jobs that were remotely digital. Ten years on, Suveer Bajaj, Pratik Gupta are the proud founders of one of the leading independent digital agencies in India.

Still in college, the four entrepreneurs were juggling work and studies all in the quest to do “something creative with technology,” says Bajaj, co-founder, FoxyMoron. In fact, they did not start out with the clear idea to launch a digital agency. “The scope of digital was limited to building a corporate website, doing some search, CRM etc,” he says. Limited scope, but they did it all.

The journey has had its ups and downs but there is nothing Bajaj and his co-founders regret. In the last ten years have they checked all the boxes they wanted to? “At 19 we could not plan for the next week let alone the next five years. So we set ourselves short-term goals, and sought validation and proof of concept,” he says.

While they hit their milestones along the way, Bajaj recalled that one of the things that worked in their favour was the name of the company - FoxyMoron. He confesses that the name Foxymoron has got people curious enough to say “I would like to do business with a company that’s called FoxyMoron.” 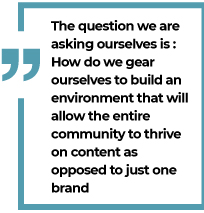 As the company grows from strength to strength, it will focus on marrying content with data. “We are currently gearing up for scaling up the operation, but coherently without isolated silos,” he says. “The question we are asking ourselves is : How do we gear ourselves to build an environment that will allow the entire community to thrive on content as opposed to just one brand,” he adds. To that end FoxyMoron along with Famous Studios has launched a 9,000 sqft studio space where content creators from around the country can come and create content. “We will be helping the creation partners monetise, distribute and license their content to brands.” Not just that the maker-studio model will also create a uniform measurement system and finally decode how the content results in commerce.

Bajaj believes that fiduciary responsibility of the agency who sits between the buyer and the seller is very diverse from what it used to be 20-30 years ago. “The industry is still becoming aware of these responsibilities and the steps that agencies take towards fulling these duties will define who survives who doesn't,” he predicts.

Some contemporaries of FoxyMoron have sold stake in their companies and become part of larger groups and holding companies. Bajaj says back when the began the four had no idea what they were creating could be sold one day. We ask Bajaj, now that they know and have been approached to be acquired, isn’t it tempting to follow suit? Evading the question on whether it is tempting, he explains why an acquisition is the next logical step.

He agrees that joining a large group opens doors for independent agencies because once huge spenders realise the relevance of medium they like to consolidate their responsibilities with groups. “The alignment with groups becomes important mainly from the point of relevance and building a common narrative (across mediums). Very early on we began sitting in on multi-agency meetings where the creative agency would give the central idea, and we asked clients why we can’t do the same?”

“Everyone talks about integration when they talk of the agency of the future. While it is hard for huge groups to integrate, it is relatively easier for a huge company and a small independent company to integrate. And this is what has been happening in India so far; and it will continue to go on until the appetite for building a common narrative is satiated.”

‘BARC ratings are credible. Cross-media measurement to be rolled out next year’
18 hours ago