After an extraordinary performance in 2017, India scored 21 metals in total at the Cannes Lions International Festival of Creativity 2018. Even though the metal haul this year is half that of last year’s it would be an unfair comparison to take the tally into account. The all-new Cannes Lions saw a reduction in sub-categories and had a six-Lion cap on the number of categories in which one campaign could be entered, drastically impacting the chances for one campaign to sweep the award show.

In fact, the total number of entries dropped by a fifth this year because of the restructuring of the festival and Publicis’ self-imposed exile from award festivals. India’s conversion rate in 2018 was 2.15% with a total of 979 entries from India in comparison the conversion rate in 2017 was 3.26.

Indian agencies bagged the two Grand Prix Lions for the fourth year in a row and gold, silver, and bronze Lions in the Glass category keeping up the tradition of winning in the category every year since its launch in 2015. 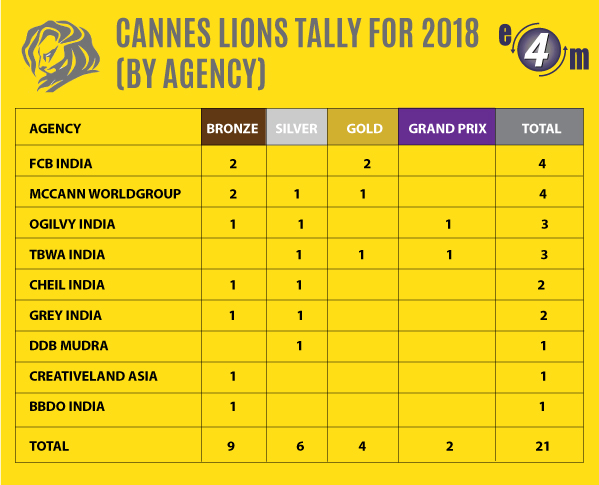 But the Indian contingent was not counting metals alone this year. That’s because 2018 was extraordinary in its own way for India. India’s most beloved and revered ad-men brothers Piyush and Prasoon Pandey were honoured with the Lion of St. Mark, recognising their contribution to the ad word. “I am not thinking about the numbers. I feel that this is a very special year for India as someone like Pandey brothers are getting an honor like this," felt Parixit Bhattacharya, CCO, TBWA\ India.

Commenting on India’s performance in 2018, Prasoon Joshi, Chairman McCann Worldgroup Asia Pacific, said, “I wished and hoped that some of the ideas will do better, but you can only work hard. I think we are working hard. Yes, it has not been as big a year.”

Considering the size of the country, India should be performing better, he felt. “We keep trying and we have come a long way. If you see earlier, we had very little to show in our performance. The year when I won 2 gold Lions here, suddenly we said India is winning. Then I think we kept on winning. Cut to last year and we saw McCann winning 16 Lions. We have come a long way from no performance to performance of this sort. I think we are doing well, and I think the culture is very important for that. We push people to excel in the ideas of the craft and in India over the years I’ve tried to work hard to build a culture of excellence," said Joshi.

India may not have won in numbers like last year, but India won big anyway. Josy Paul, Chairman BBDO India felt that it was a year of unpredictability, both at the football World Cup and Cannes Lions 2018. “That's what made the awards this week so exciting. India won 21 Lions. The big ones! What a great show! True contribution and influence for our world,” he said.

Summing up the India story at Cannes in 2018, Sumanto Chattopadhyay, Chairman & Chief Creative Officer, Soho Square, said, "The Pandeys being awarded the Lion of St. Mark was the crowning glory for the Indian delegation to Cannes 2018. In his acceptance speech, Piyush said he hoped there would be a lioness receiving the same honour soon. Until then, there are already two Indian 'lionesses' who have made their mark at Cannes -- Kainaz Karmakar who is behind Savlon Chalk Sticks and Swati Bhattacharya with her Sindoor Khela. They prove that, when it comes to Indian creativity, #NoConditionsApply.”

Parixit Bhattacharya felt that creatives need to grow out of basing creativity on what has worked in the past. “Creative people have such a good pulse in their pocket but I think we rely on history on how we have usually been doing things and we use that understanding and logic to inform. All our systems, all our guidelines, everything you know comes from the past. It doesn’t work always. You have to figure how to revive it. I feel that a lot of people are doing it,” he said.

He also laid emphasis on a healthy relationship between agencies and marketers. “There are so many smart marketers. Perhaps a bit more faith and better relationships is all that is required between clients and large agencies because they are doing their work and they can value. We need to merge the creative with strategy,” he said.

The creative community often complains that marketers are holding them back. Joshi said that that excuse is not valid. “I consider that to be absolutely incorrect. In my experience, all the great work which I have been able to produce is because of great clients who have really partnered with us. Yes, you do need more clients who believe in you and who are willing to partner with you, but the excuse that clients don’t allow us to do great work is just an excuse, it is not the reality.”
The Week That Was

India opened its account with TBWA\ India winning the Lions Health Grand Prix for Good and a Gold in Pharma Lions on Day 1. It was one of the most talked about campaigns from India. Grey India’s Sehat Ka Batua for Mahindra Rise, DDB Mudra’s Project Free Period for Stayfree and McCann Health’s Noon Assembly for Kwality that won the in Health&Wellness category reaffirmed Indian agencies’ prowess in the category.

FCB India’s Sindoor Khela which was one of the big winners this year brought home two gold Lions and two Bronze Lions including a Gold in the Glass category. The wins this year ended FCB India’s long spell of draught at Cannes Lions. “The Lions we've won for our campaign for TOI stands testimony to the creative transformation at FCB India. This transformation has energised the entire agency, creating a momentum and a new winning culture,” said Rohit Ohri, Group Chairman & CEO, FCB India, when the agency bagged its first metal, a bronze on Day 3.

The campaign which is unique to the Indian social context and in specific to the Hindu Bengali custom broke barriers and won hearts of the jury members. Some say that one of the reasons Indian ideas do not win at global platforms is because a lot of the meaning is lost in translation.

Citing an example on how this could happen, Prasoon Joshi, Chairman, McCann Worldgroup, Asia Pacific said, “I remember there was the Eunuch campaign we did about the Kinnar community in India. Most of them go to sing, dance and celebrate in a home when a baby boy is born. The idea was to make them understand that the girl child is also important and so they should also dance and celebrate the birth of a girl. We wrote a few songs for them which gave examples of great women in the world and how beautiful it is to have a girl child. The thing is, it didn’t reach where it should have reached globally, because understanding this culture of the Kinnar community in India and their role in the celebration of the birth of a baby is an alien idea to outsiders. Indians praised the campaign, but I don’t think it had gotten it’s due in terms of recognition.” This year FCB India’s success also lied in beating the cultural-disconnect.

Ogilvy India scored a Grand Prix for the Savlon Healthy Hands Chalk Sticks initiative in the Creative Effectiveness category, proving once again that if a client pursues a simple idea, one can win more than just awards - one can solve big problems.

McCann Worldgroup India won a gold for the Paytm Sweet Change campaign in the newly-introduced Creative e-commerce category. The category seemed just perfect for the Paytm campaign. It celebrates creative, commercial ecommerce, payment solutions and innovation. Entries were judged on innovation and optimisation of the customer journey resulting in increased consumer engagement and commercial success.


Where India lagged, yet again

In the Mobile Lions category where India had a total of 31 entries, only one secured a shortlist which did not get converted into a win. India did not impress jurors in the newly introduced Social and Influencer Lions category which is based on the old Cyber Lions category. Two of the 76 entries made it to the shortlist but did not make the cut in the final outcome. 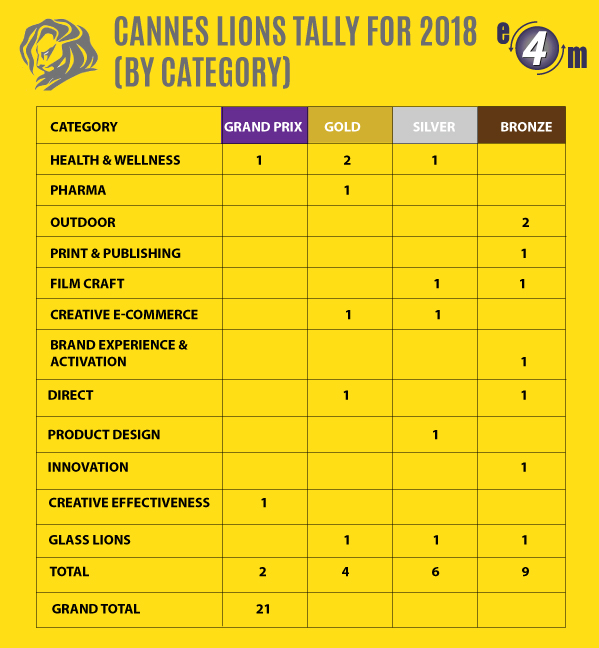 Adjust your expectations based on reality of the day: Naren Ambwani
8 hours ago

'Post COVID, marketers will need old practices as well as a redrawn communication plan'
9 hours ago