Over time, more and more brands are learning that social media is not a free marketing channel. One mistake might cost them more than they ever thought as the products are under constant public scrutiny now. Recently, Horlicks found itself at the receiving end of flak with people terming it “unhealthy”.

The controversy has put the spotlight on actor Amitabh Bachchan, who has been associated with Horlicks’ Mission Poshan campaign. 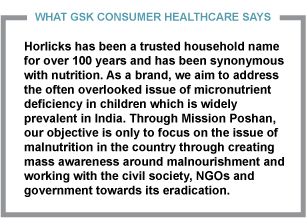 Several public health experts, including the Nutrition Advocacy in Public Interest (NAPi), have urged Bachchan to dissociate himself with Horlicks just like he did with Pepsi.

In a letter written to Bachchan, NAPi said, "Horlicks is a high sugar product, as 100 gram of a popularly advertised pack of Horlicks Delight contains 78 gram of carbohydrates, of which 32 grams is sucrose sugar."

exchange4media reached out to GSK Consumer Healthcare for their comment on the controversy. In an email statement, they said, “Horlicks has been a trusted household name for over 100 years and has been synonymous with nutrition. As a brand, we aim to address the often overlooked issue of micronutrient deficiency in children which is widely prevalent in India. Through Mission Poshan, our objective is only to focus on the issue of malnutrition in the country through creating mass awareness around malnourishment and working with the civil society, NGOs and government towards its eradication.”

We also spoke to brand experts to understand the impact of the controversy on the brand. The experts opined that Horlicks will have to come clean on the claims against it to retain its image.

Harish Bijoor, Brand Guru & Founder, Harish BIjoor Consults Inc, said as the consumer society gets sharper, every category that touts nutrition and health will get under keener scrutiny.

“Anything with too much sugar, too much salt, and in fact too much of anything that has the potential of causing health issues for consumers is going to be up in question. Horlicks is going through one such session,” he explained.

Saurabh Uboweja, international brand expert and CEO of Brands of Desire, had a similar take.

“Everything that brands do today is being judged. Interestingly, this was just a campaign to position Horlicks as a brand that is looking to bring attention to the nutrition problem in India. Nowhere are they trying to position the Horlicks product for children with malnutrition or trying to sell it to them, as they won't be able to afford it in any case. Perhaps, they have been a little opportunistic to link it with an existing government scheme, which lends a somewhat political flavour to the campaign.”

Uboweja feels here we can see one of the perils of influencer marketing as a use case. Bijoor believes that stars and brand-endorsers are going to come under deeper scrutiny.

“Amitabh Bachchan is under one such scrutiny. This harms Amitabh Bachchan in no way, but is quite likely to harm brand Horlicks for sure, if the ante of consumer scrutiny and action is upped,” said Bijoor.

Uboweja shares that Horlicks will have to come clean on claims of an unhealthy product. “All this while, people have seen Horlicks as a healthy product that boosts children's development. I think they will come out with validated research to back their claims. Bachchan will wait for that to happen before taking a stance,” he explains.

Throwback Thursday: How Balbir Pasha got India to talk about AIDS
1 day ago

advertising 2023 will be a year of unlocking Web 3.O: Shams Jasani
1 day ago

advertising Throwback Thursday: How Balbir Pasha got India to talk about AIDS
1 day ago