However, as per the survey, 68% Indians feel the Prime Minister has failed to create jobs

The Narendra Modi government has fared dismally on the jobs front yet it will come back to power in May when the general elections results are announced, says a BW Businessworld-Decode Pre-Poll Survey.

BW Businessworld with Decode did a mood of the nation survey and another Corporate India survey to gauge the people’s mood.

Jobs may be the top concern of the country, and as many as 68 per cent people in the country feel the Modi government has done dismally. Yet 64 per cent think PM Modi will be re-elected in the general elections. Corporate India thinks on similar lines.

The BW-Decode survey findings suggest that an upsurge of nationalist sentiments in the wake of Pulwama and Balakot will subsume discontent on account of jobs when people go out to votes.

Talking about Corporate India, it’s believed that industry leaders often talk in tandem with the government of the day.

India thinks that Atal Bihari Vajpayee has been the best-ever PM, followed by Modi and Indira Gandhi, the survey says.

Corporate India, on the other hand, thinks that Modi has been India’s best-ever PM – followed by Atal Bihari Vajpayee and Indira Gandhi.

Both the nation and Corporate India have listed “ease of doing business” as Modi government’s top economic achievement. GST rollout and Digital India are special achievements too.

Among other special achievements, the surveys find Modi government’s infrastructure push and “power for all” vision noteworthy.

Both Corporate India and the nation surveys list Nitin Gadkari as the top performer in the Modi cabinet. The pace of highway construction, Sagarmala project, and Mission Namami Gange have gathered steam under Gadkari in this regime.

Among other performers as per the surveys are – Piyush Goyal, Arun Jaitley, Suresh Prabhu and Sushma Swaraj.

Lack of jobs has been worrying India and Corporate India. Both the surveys stress that lack of employment opportunities remains the biggest concern today. For India, disarray in the education sector and the farm distress are the two other topmost concerns. For Corporate India, NPAs, and the education disarray are the other two concerns, apart from lack of jobs.

Modi’s personal popularity has gone up in the last one year. This has been attributed to a muscular national security policy that he has exhibited.

Not to be left behind, Opposition leader and Congress president Rahul Gandhi’s stock too has gone up in the last one year – largely due to the single-mindedness with which he has attacked Modi and the BJP government – on Rafale, jobs, and farm distress.

If we assume that Modi comes back to power in 2019, who should be the finance minister?

India thinks it should be Nitin Gadkari – largely because of the pro-active role that he discharged as the highways and Ganga Minister. Significantly, Gadkari’s projects resulted in a large number of employment opportunities as well.

Corporate India has a different take on the matter – it wants Piyush Goyal as the FM if Modi takes oath as PM. Goyal has been a rising star in the Modi government and has been the stand-in FM when Arun Jaitley was indisposed.

Not surprisingly, India as well as Corporate India want the new government to focus on jobs, farm distress, small businesses and the education sector.

Significantly, both the surveys feel that the Vajpayee government did the most to create jobs, followed by the Manmohan Singh government.

What has been the low point of the Modi government?

The unambiguous response in both the surveys is demonetisation.

In what should worry the Modi government managers both India and Corporate India think that there’s a growing trend of fudging data in the present regime.

What is one big-bang reform that they would like the new government (read the Modi government) to undertake? Both India and Corporate India think that BSNL / MTNL should be on the blocks after Air India. 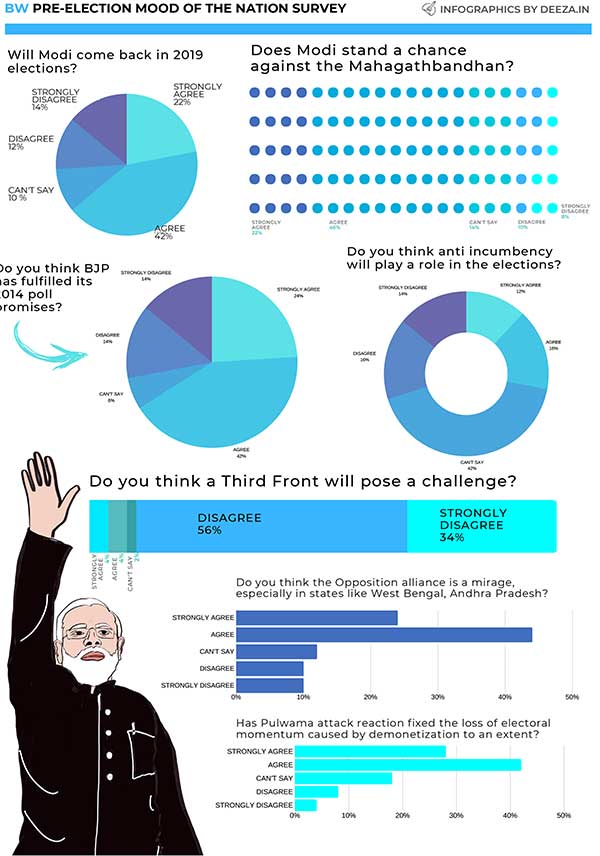 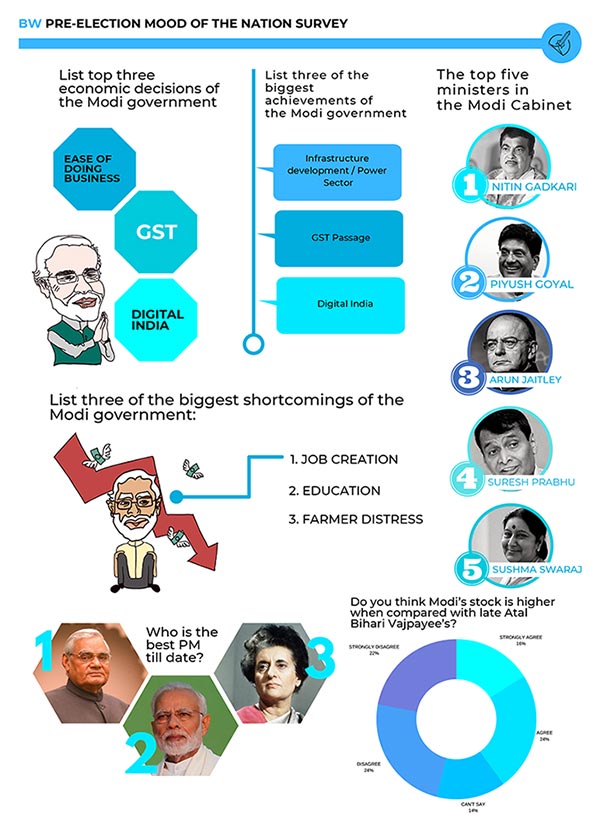