Data shows women are not news-averse, upto 44% women watch it

Women’s viewership of news channels is around 44 per cent during a huge news event like elections or demonetisation, says BARC data

Advertisers, you might want to change your media plans for news channels this International Women's Week. Allow us to let you in on a secret: Women watch the news too!

Women's viewership of news channels is around 44 per cent during a huge news event like elections or demonetisation. According to the Broadcast Audience Research Council (India) data, the weeks around the announcement of demonetisation had a 37 per cent higher female viewership as compared to non-demonetisation weeks. 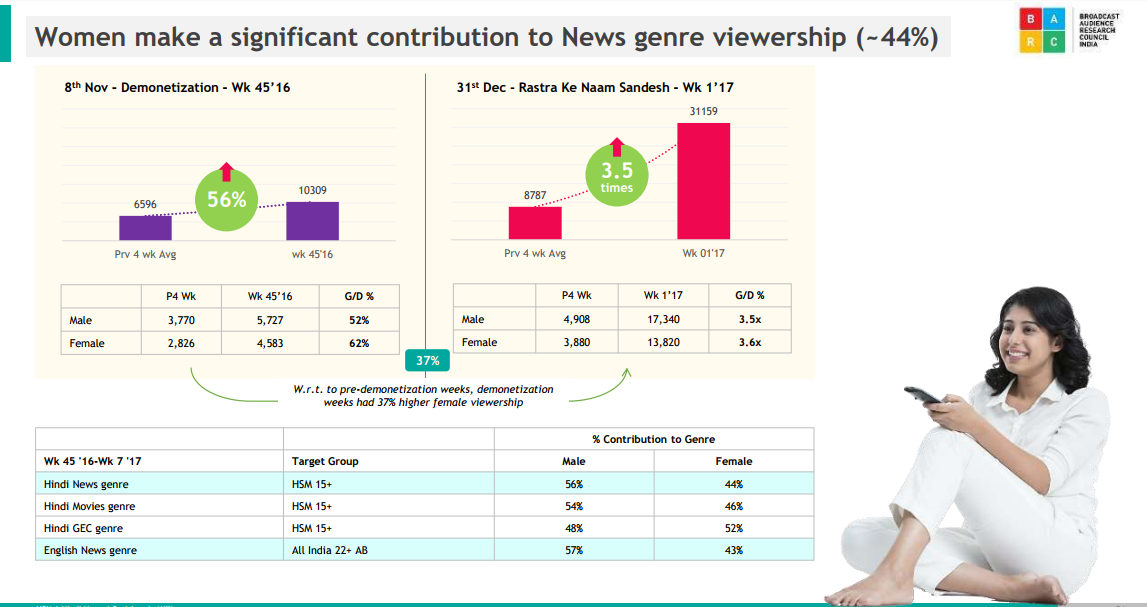 Data shows that women are not news-averse. Women comprise 44% of Hindi news channel and 43% of English news channel viewers. "Women viewership of several news channels has been growing. While it differs from channel to channel and varies as per time slots, I don't see why this number cannot reach 50 per cent over a period of time," said Ashish Bhasin, ‎Chairman & CEO, South Asia Dentsu Aegis Network.

As much as media planners love data, perceptions about watching habits too govern media plans. "There will be people who will stand up and show the stats, but when it counts you still have the notion that most people viewing these channels are men. Since BARC is relatively new, I believe that these stats will take some time before this perception is changed," observed Aatsi Desai, Chief Business Officer, What Clicks. 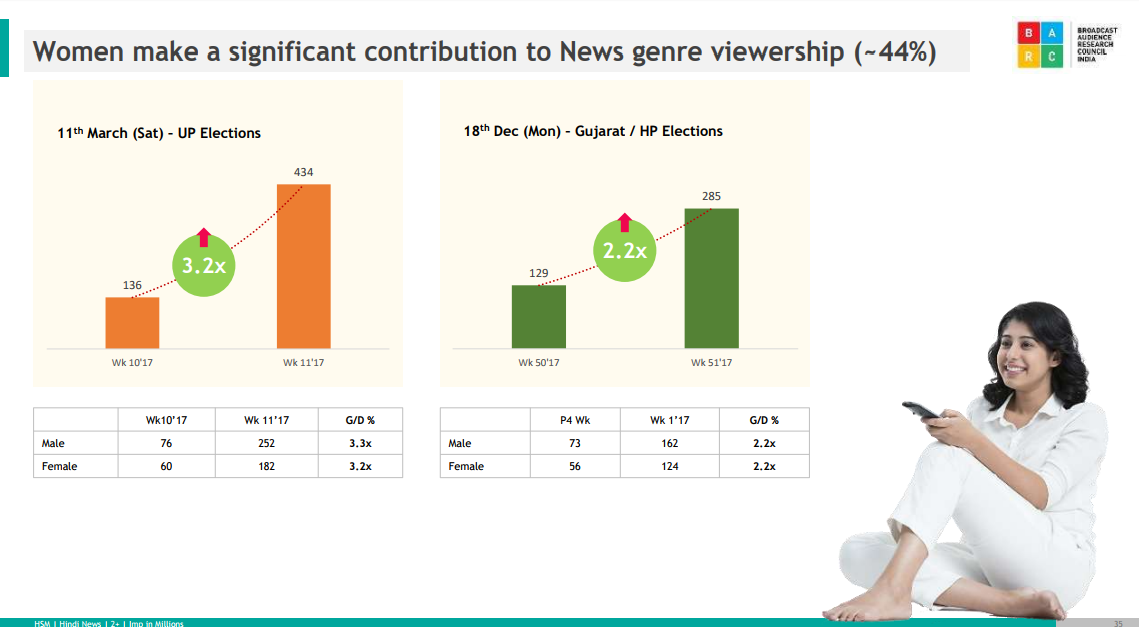 The new data from BARC may not sway advertisers immediately. If this trend sustains for a year, then eventually ads directed towards women will be seen on news channels. "Brands that may not have considered news channels to target women may now look at news channels actively, should this trend sustain," said Bhasin. Concrete data from a source like BARC may  eventually impact the media plans of certain categories that have higher women users. "Data will correct behaviour eventually. It's always tough to change behaviour at any time. But 44 per cent is a very significant number; this should pave the way for a change. At least on Hindi news channels," observed Karan Kumar, CMO, FabIndia.

In addition to brands recognising the opportunity, there is an equal opportunity for broadcasters to sell to their women audiences like ESPN did very recently. ESPN's sales pitch to advertisers noted that more women are watching the sports channel. According to a Nielsen study of sports genre viewership in the US, women saw a larger lift in viewing from out-of-home than men, with a 9.4 per cent lift over in-home audience compared to 7.2 per cent for men. ESPN's fresh approach has made advertisers rethink media strategies.

Skootr appoints Prashant Datta as Head of Marketing
14 hours ago

Dark days ahead for fairness cream ads in India?
19 hours ago

2020 for media: How to seek opportunities in an uncertain year
19 hours ago

Cable Operators Welfare Federation to discuss NTO 2.0 with TRAI on Feb 13
1 week ago

60% of our growth should be organic; 40% from acquisitions or collaborations: Gour Gupta
14 hours ago