#IPL2019 sets a new record on Twitter with 27 million Tweets

Mumbai Indians won the title for the fourth time, but Chennai Super Kings owned Twitter by being the most Tweeted about team during #IPL2019

After 60 matches of world-class cricketing action, the Mumbai Indians (@mipaltan) beat Chennai Super Kings (@ChennaiIPL) in the final, to win their fourth title of the Indian Premier League (@IPL).

As decibels hit new levels across stadiums in India, the roar of cricket fans was just as resounding on Twitter. The platform is the home of cricket, and fans turn to Twitter to catch the real-time highlights, see what’s happening and engage in passionate conversation about the matches, players and teams of the @IPL both on and off the pitch. This year, Twitter saw a record-breaking 27 million Tweets, a 44% increase over 2018’s IPL-related Tweets.

The Golden Tweet for #IPL2019 was this Tweet from Mumbai Indians cricketer Hardik Pandya (@hardikpandya7) acknowledging MS Dhoni (@msdhoni) as his friend and source of inspiration. Dhoni and Pandya played each other in the final, but this Tweet shows the strong sportsmanship between opposing IPL sides. The Tweet received nearly 16K Retweets.

My inspiration, my friend, my brother, my legend ❤? @msdhoni pic.twitter.com/yBu0HEiPJw

The Mumbai Indians (@mipaltan) dominated the conversation on Twitter on Sunday when they won the #IPLFinal2019, owning 63% of total mentions vs. Chennai Super Kings (@ChennaiIPL) 37%. 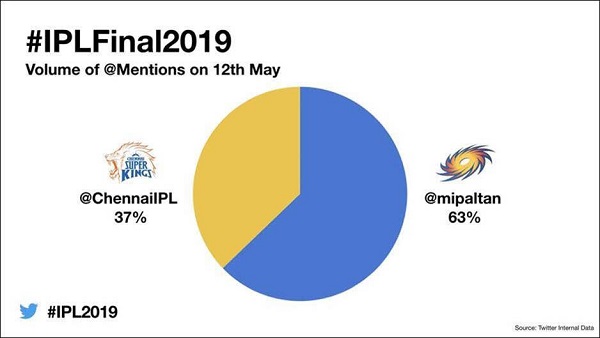 From #OneFamily, with love ?

However, it was the Chennai Super Kings (@ChennaiIPL) that consistently won hearts by becoming the most Tweeted about team on Twitter.

Hi there! This is to everyone of you who supported! Believed no matter what! During all the highs and lows. Whatever the situation! However impossible! We are what we are because of you! NANDRI is inadequate! The hunt will continue, whatever it takes! ?? #WhistlePodu #Yellove pic.twitter.com/cS7ebr3CUZ

After a great inning on the field, #Thala @MSDhoni was the most Tweeted about player during #IPL2019, followed by Virat Kohli (@imVkohli), Rohit Sharma (@ImRo45), Harbhajan Singh (@harbhajan_singh) and Andre Russell (@Russell12A).

This year also saw a growth in native video clips Tweeted on the platform, with the @IPL Tweeting out 130% more video Tweets as compared to #IPL2018. Twitter users loved these videos sharing insights, highlights and behind the scenes content from the @IPL and all eight teams alike. This video from @IPL showing great sportsmanship between two rival teams received a large number of views.

Unsurprisingly, the nail-biting final between Mumbai Indians (@mipaltan) and Chennai Super Kings (@ChennaiIPL) was the most Tweeted about match of the season.

Cricket speaks everybody's language on Twitter, and along with excitement for Twitter’s custom IPL emojis, we saw incredible exchanges between teams in Indic languages on Twitter. Here are some examples of those conversations.

“Fans love Tweeting about cricket and this year we saw a record-breaking 27 million Tweets around the IPL 2019 season. Twitter is the best way to see what’s happening in the world of sports and to talk about it, so we’re thrilled to see this incredible growth in IPL conversations this year,” said Manish Maheshwari (@manishm345), Managing Director, Twitter India. “We are looking forward to enhancing fan experiences on the platform as we go to the second half of the cricket season. We know conversations around the biggest global cricket tournament - the ICC Cricket World Cup is sure to take off on Twitter, too!” Here are a few iconic Tweets from this season through this Twitter Moment.

What a fabulous fabulous way to finish one of the most exciting seasons! Incredible individual performances did not outshine the teamwork that this team has shown right through. @mipaltan #OneFamily #IPL2019 #MIvsCSK pic.twitter.com/dpUs1dkJ9W

For cricket lovers, all eyes are set on the upcoming ICC #CWC19. Fans across the globe can follow and join the conversation around the biggest cricket tournament on Twitter. Keep Tweeting! 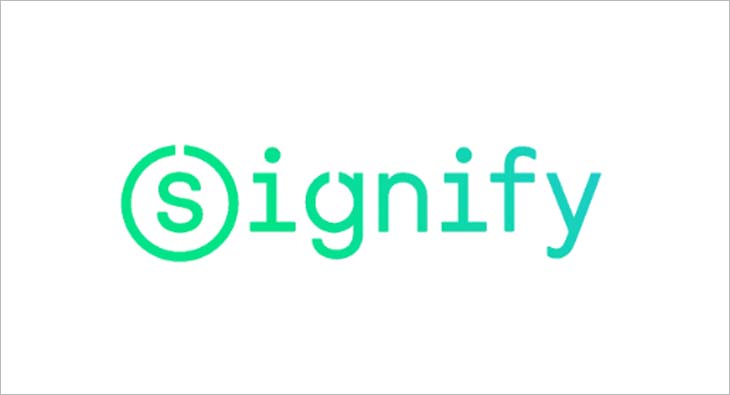 ipl IPL is the time when we are at the peak of our brand activations: Nipun Marya
4 days ago