As day 1 of Goafest 2018 kicked off around the idea of 'Make in India', here is a look at a few moments from the event on April 5

They say that there are only two things that April promises to bring every year: A scorching sun and a sizzling Goafest! And April always lives upto its promise! So we are back with the 13th edition of India’s biggest advertising festival, Goafest, hosted by The Advertising Agencies Association of India (AAAI) in association with the Advertising Club. After M K Anand, Vikram Tanna, Nakul Chopra, Vikram Sakhuja, Ashish Bhasin, Ajay Kakkar and Jaipdeep Gandhi lit the ceremonial light and declared the festivities on, Goafest was officially open to its 2000+ attendees looking forward to soaking in the creativity and tapping into the knowledge by the inspiring array of speakers lined up this year.

Starting with an address by Ashish Bhasin, who got a lot of cheering from the crowd when he welcomed the guests to the 50th year of Abbys and 13th year of Goafest, he paved way for two brilliant speakers with awe-inspiring stories, exiting the stage with the promise of leaving “Goa greener than it is.” Happy Furniture To You!

The 3 day festival kick-started with a power-packed session at the Discovery India Industry Conclave 2018, by Kashyap Vadapalli, CMO and Head of New Business, Pepperfry, who spoke about the brand’s own growth story. “6 years ago, ecommerce in India was nascent and Pepperfry started because of 3 reasons: 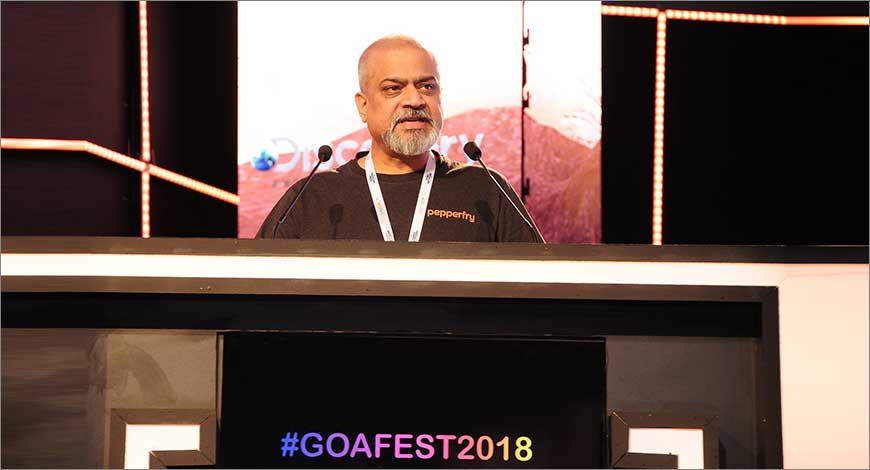 Kashyap Vadapalli, Chief Marketing Officer and Head of New Business, Pepperfry, addresses the audience on the first day of Goafest 2018

They blended the three reasons and came up with a name that signified Indian and honest (Hence Pepper), and fun (Hence Fry, because anything becomes fun when you fry, right? We totally agree!). After 2000 work days and 20 million+ work hours, Pepperfry today has streamlined its business, and taken supply, mixed with technology, to the Indian consuming class. “We worked towards standardising the entire category. Since we were very close to manufacturers, it helped us bring value to the Indian consumer," said Vadapalli. 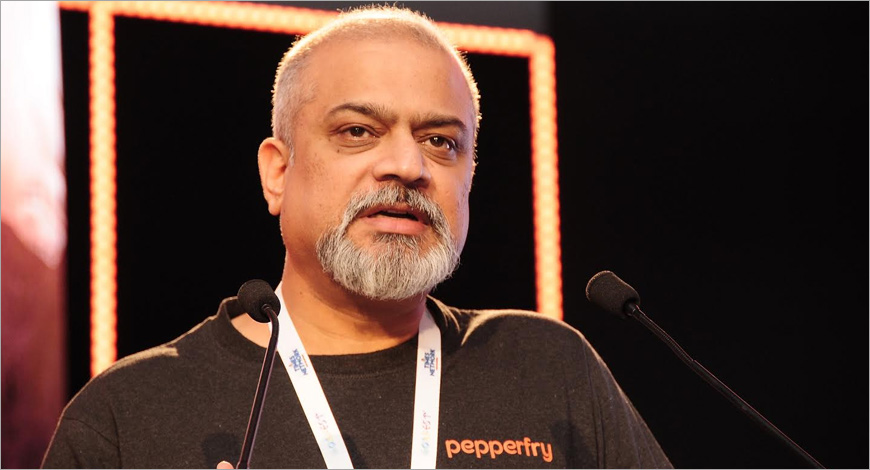 But of course the Pepperfry empire wasn’t built in 2 months. They got deep into services, logistics and cataloging, and now, after 6 years, have launched 10 house brands that contribute to 50% of our business, 27 studios across 15 cities in the country (2500- 4000 sq ft spaces), and are planning to launch 12 more. So what lessons did we learn from the entrepreneur?

When you are setting out to build an organisation, you have to be ready to face challenges that you weren’t even prepared for. Things will get uncomfortable.
If you want to become a trendsetter, you need to be ready to get your hands dirty. “We sought to build on India’s inherent strengths; capitalised on the Indian artisans; worked towards building a differentiated market.”

You need to understand consumers better. It is important to focus on customer’s pain points. Vadapalli taught us that to evolve, one must constantly listen, and we were left inspired and intrigued!

The Yogi Baba Who Took the World of MNC By Storm

It was indeed a big day for intrigue and for Make In India, because the man who came next swathed in a saffron loincloth was the man for whom every single soul in the audience was all ears since the time the Goafest Day 1 schedule was announced. It was none other than the mind behind India’s largest swadeshi FMCG Patanjali, the super baba on the tryst to make yog and ayurveda cool- Yog Rishi Baba Ramdev. After starting classic style with Gayatri mantra, he dived deep, full Hindi, into how everything, from knowledge, emotions, actions, expertise, experience, skills, innovation, research, resource, and even waste, converts to wealth. 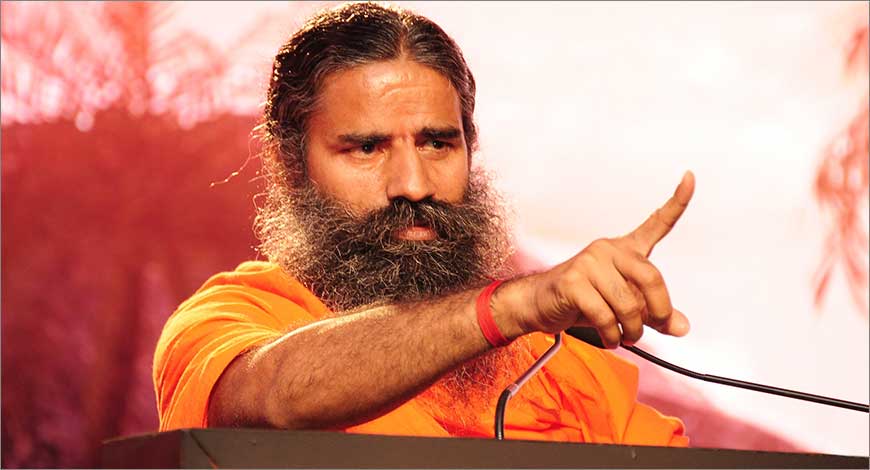 Yog Rishi Baba Ramdevji takes the stage in the last session of the day.

Even though he had humble beginnings from an agriculture background, he was never scared to dream of a prosperous country, even for the poor, and the biggest financial powerhouse. “I only had one question: What can I do about this country? From farming to retailing, I haven’t studied anything, but the world is enough to teach me lessons. When you come face to face with reality, it teaches you lessons no conventional course can teach.” Peppered with laughter, yoga, life lessons, jokes and harsh doses of reality, he shared the essence of his being: Jo karo, usko pura karo. 100% daalo apna. Usko beech me mat choro. (Whatever you do, do it whole-heartedly. Give your 100% and don’t leave anything mid-way).

While he encouraged everyone in the audience to take risks, he also, in his smooth style, said, “Whatever you do, do it without ego. Give it all. There is nothing called destiny.” Without any inhibitions, he also added that while some people depended on hard work, some relied on destiny and some believed in cheating. “I believe in universal justice. If you cheat, you might grow for 10 years tops. What will you do after that? Same is the rule for destiny. Work on your work; not on Gods.” Baba Ramdev with Ashish Bhasin answers questions from the audience with his signature wit and humour.

It was all hard work and goodness that has made Patanjali the brand that it is today. As adept at Sanskrit shlokas, and the language of the rishis, as he is in scientific theories, the man was all heart, and not shy of taking on MNCs by its horns ‘till it was all in good spirit, and made the life of Indians better’. “Patanjali is a non-profit charitable organisation. Our intent isn’t profit. Aasan karwate karwate, bado bado ko sheersasan karwana hai,” he jokingly added with whistles from the crowd.

While he spoke about expanding the brand to other countries, he publicly made a promise that he would never loot from poor countries. “We will never bring money from a poorer country to India. But we will become a global brand. Their profit will be their profits,” he announced with full conviction.

It is All About Connections with Every Individual

The Baba must have spoken about controlling the body, mind, thoughts, emotions and actions, and associating oneself with every individual’s mind in his yogic style, but it wasn’t much different from what the corporate honcho Mr. Kashyap believed- It’s all about knowing what your people want. 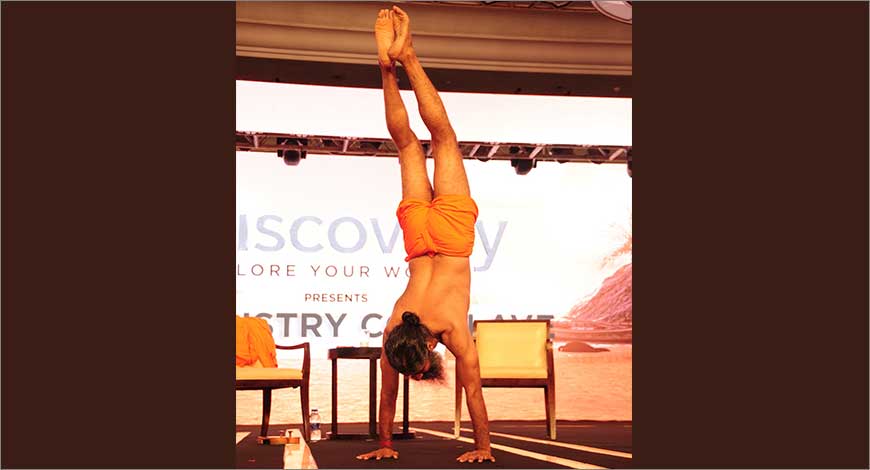 As Ramdev Baba spread the inclusive, sustainable, decentralised, just philosophy of swadesi, and ended the session with his signature Anulom vilom pranayam procedure, the audience was left laughing, impressed, inspired and entertained by the proceedings of Day 1 of Goafest. Something we promise every year, and stick to. Don’t we? It was obvious that the Baba had made an epic connection with the audience as there seemed to be no end to the session, and happily so for both the speaker and the audience. But Day 1 had to end somewhere.

So as we look forward to seeing you tomorrow, we hope you have more fun in the coming days. As Baba Ramdev would say: Kuch log singhasan dhoondte hai, mai mann ka asan dhoondh raha hu. Touche.

‘Glam up & style up’ for the festive season, says Lifestyle
15 hours ago

Dan Wieden of legendary Wieden+Kennedy and brain behind Nike’s ‘Just Do It,’ is no more
20 hours ago

Gandhi Jayanti: The many ads of the Mahatma
20 hours ago