On the first day of polling, Narendra Modi, BJP, Rahul Gandhi and Congress were among the top five mentions on Twitter

As voting for Lok Sabha elections moved from first phase to the second, Twitter saw the fading away of Congress and its chief Rahul Gandhi from top trends, hashtags, mentions and retweets. On the first day of the polling on April 11, Narendra Modi, BJP, Rahul Gandhi and Congress were among the top five mentions on Twitter. However, in the second phase on April 18, it was BJP that stole the limelight and neither Congress nor Rahul Gandhi made it to the top mentions.
According to a study by the Indraprastha Institute of Information Technology Delhi, on April 11, Rahul Gandhi had the most popular tweet. This tweet of his had got 13,409 retweets and 44,560 likes.

You vote today for the soul of India. For her future.

Cut to Day 2. The day belonged completely to the BJP and Tamil Nadu superstar Suriya Sivakumar who shared a selfie after voting.

Neither opposition leader Rahul Gandhi nor the Congress Party made it to the top 5 mentions on Twitter as 91 consistencies went to poll on April 18. The official handle of BJP saw 27,648 tweets followed by Narendra Modi who was mentioned 15,410 times by twitteratis. Suriya Sivakumar got 7,369 mentions followed by Minister of Petroleum and Natural Gas and Skill Development and Entrepreneurship Dharmendra Pradhan, who stood at 7134 mentions. Lastly, making it to the top five mentions, was Amit Shah again at 6,153. According to the study, the top 5 hashtags on Day 1 were #LokSabhaElections2019 with 48,279 tweets, followed by #VoteForIndia with 30,948 tweets, #IndiaElections2019 with 27,776 tweets, #ModiOnceMore at 25,345 and finally #VoteKar with 16,686 tweets. In the second phase, the top trending hasthag #LokSabhaElections2019 saw 91,902 followed by hasthtags #EveryVoteForModi, #TNElection2019, #IndiaBoleModiDobara and #OruviralPur. 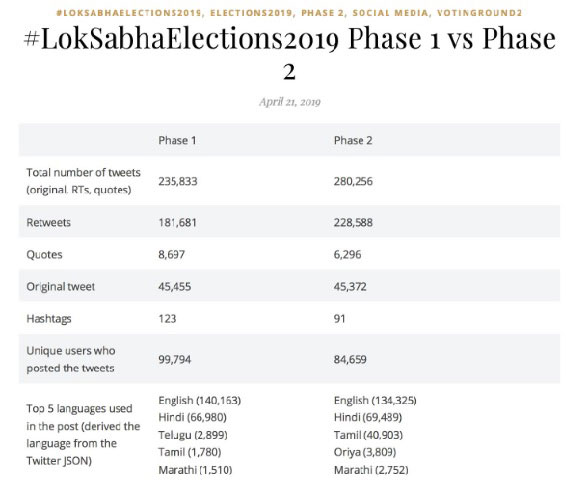 Talking about the study, Ponnurangam Kumaraguru, Associate Professor at IIIT Dehi and IIIT Hyderbad, said, "We are super excited to be doing this social media analysis to understand the trends during the elections. In the two phases that are done, we see some interesting similarities and differences. In terms of differences, even though we found the total number of tweets higher in phase 2, it was generated by lesser number of unique users compared to phase 1. We also saw #OruviralPuratchi and @Suriya_offl in the top 5 hashtags and top 5 user mentions, both of these are connected to Tamil film industry.”

Hyundai Motor India reimagines an India of tomorrow
23 minutes ago

Cord-cutting in India: Lot of hype, little in reality
1 hour ago