YouTube Originals is all set to launch in India in three weeks, with an innovative variation on the music reality show genre. The show titled ARRived - “an authentic search for the best music talent in India with A.R. Rahman” - will be available for free on YouTube in India.

YouTube, the primary destination for video content creators, has been an integral part of the journey to recognition and fame for many talented people. YouTube offers a democratic platform where people can showcase their talent and become stars in their own right. In 2014, YouTube had 16 channels with more than 1 million subscribers in India. Satya Raghavan, Entertainment Head, YouTube in India, said that this number has now grown to over 300 channels and “we’re adding two more almost every single week,” he said.

User-generated content has been the cornerstone of YouTube. “The show AARived is born from the insight that many people are taking their first step into trying to eke out a career in the space of music on YouTube. It was very important to recognise that and celebrate that journey of creators. Our objective is to help the people who are starting out their journey,” Raghavan said. 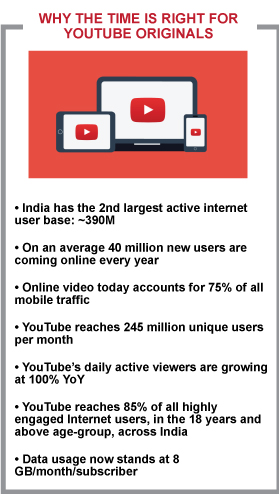 Globally, YouTube Originals is part of the video-streaming platform’s subscription driven YouTube Premium service. In the introductory stage “YouTube Originals is going to be ad-supported and not subscription driven,” said Raghavan. A study by KPMG on the media and entertainment sector shows that the OTT space in India is primarily driven by the AVOD or Freemium model. Is the Indian market not ready for an SVOD model yet? “Not at all! YouTube Premium available in 17 countries and there is a roadmap for launching it in many other countries. I am sure at some point of time it will happen in India as well,” said Raghavan.

Despite brand safety concerns on YouTube, the video streaming platform is the primary destination for advertisers looking for mass reach. According to a KPMG Report titled Media Ecosystems: The Walls Fall Down, CPMs for OTT platforms are declining on account of an increase in the base of viewers. Currently OTT platforms such as Hotstar and SonyLiv are known to charge a premium that is around 1.2-1.5 times that of YouTube. For all these reasons, brands continue to invest in YouTube for digital video advertising.

“We have been seeing many brands come forward to work with creators in the past. Our goal is to further boost the ecosystem and supercharge the growth,” Raghavan said. YouTube tested the waters in India with two sponsored shows as pilots. These shows were centered around cricket and were hosted by Gaurav Kapur and Vikram Sathaye. “We are working closely with advertisers to test the market and the results have been phenomenal,” Raghavan added.

YouTube has been receiving pitches from content creators across platforms and formats. “We have received some amazing ideas from film creators, traditional media partners, and folks with whom we have not worked in the past,” revealed Raghavan. He said that content creators who work on YouTube Originals can expect to grow their community and followers because of an expansion of their audience due to the marketing efforts that will go into promoting the shows.

While comedy and thrillers seem to be a very popular genre for Original content coming out of India, YouTube is kicking off with Music. Raghavan said that YouTube, which is the mothership of all content, will dabble in all genres and formats of content with Originals in India. For now YouTube is launching only one Original show in India while globally, YouTube Originals has released over 60 projects so far, and plans to release more than 50 new shows in 2019.

YouTube will draw insights from the kind of content Indian users prefer and accordingly commission shows. “We have the good fortune of having some amazing insights and data on how each of the verticals such as movies, comedy and music behave. So we are learning from YouTube and figuring out which are the things we can go after,” he said.
For more updates, be socially connected with us on
WhatsApp, Instagram, LinkedIn, Twitter, Facebook & Youtube
Tags Digital advertising Ott content providers Satya raghavan Youtube YouTube Originals
Show comments

Hotstar's game is about quality, not quantity: Gaurav Banerjee, Star India
1 day ago

Mayank Tiwari appointed as Partner & CBO of Avataar.Me
5 hours ago

Goafest 2020: Meet the power-packed Jury for ‘The Red Abby’
9 hours ago