Charles Courtier, Global CEO & Stephen Li, CEO, APAC, MEC, who were in the country to understand what was going right for the agency here, explained why there is no longer a difference between traditional and new media

Two of MEC’s top management; Stephen Li, CEO, Asia Pacific and Charles Courtier, Global CEO, were in India recently. We caught up with them to get their opinion on the changing media industry and MEC’s plans for the future.

Is there any particular reason behind this visit?

Charles Courtier: Obviously, India is a very big market for us. That is nothing new. But apart from that there are two key things in front of us. What is happening in India with the new government, politically and economically, the next few years look very interesting and different. The other thing is MEC itself in the country. This is our fastest growing market in the world; so there is something that the guys here are doing are doing it right. So what we are looking to do is understand what we are doing right in India and take it to other geographies. At the same time, we are also looking at ways to speed it up. The new political and economic situation in the country combined with a dynamic and strong performance by MEC has created a “perfect storm” situation, if you like.

What are the things you feel that India can teach to other countries?
Charles Courtier:
Certainly doing a very good job of business development, integrating across different capabilities, like events and sports sponsorships; areas like that. These are areas where MEC India has done really well as compared to other countries.

Stephen Li:
We often talk about “one MEC”. Our business is such a diverse business, from traditional media buying and planning to activations and content; there is no part of the communication segment that a media agency does not touch. It becomes very easy to fall into silos. What we have done really well in India is live and breathe what we want to achieve everywhere----“one MEC”. So you have client-centric, consumer-inspired solutions that are strategic and are more than about just a channel or a solution to a brief. You can only do this when you have a single, cohesive team and we do that really well in India, which can be exported to other geographies in the region and around the globe. If you look at the pace of development of some of the sectors in India like e-commerce, others can learn a lot from the likes of our clients in this space.


Speaking of 360 degree campaigns, how important is it to ensure that campaigns across all mediums are interconnected and what are the challenges that you have seen in convincing clients of the same?

Stephen Li:
I think it all starts with the consumer. Today’s consumers, especially the young ones, are very different. They are much faster when it comes to processing information and entertainment. They are mindful of how respectful the communication is of themselves and the medium they are consuming. So, I don’t think it is necessary anymore to have a campaign that looks and feels the same across all mediums. The challenge for agencies is how do we ensure that they are connecting with us the right way strategically, and the underlining marketing messages are getting through without boring them or getting too literal.

Charles Courtier
It is less about having matching luggage where everything is immediately identifiable. This ‘matching luggage’ aspect of creativity is less of a concern now.  It is more important to provide a message that is consistent and that stays true to the channel of communication. I think for the young consumer, the way they receive the message is as important as the content. So, it is a symbiotic relationship between the message and its delivery and then it is about ensuring that the sum of all the messages is consistent with the overall message. It is quite difficult and I think the industry is still learning to do this in a lot of cases.

With content consumption habits and marketer expectations changing, where do you see traditional media like print and TV fit in the overall plan?

Charles Courtier
I think the premise of the question is a problem because I don’t think there is traditional media anymore and this is what has changed. The question is --- do you have great content? If you look at it globally, television has never been so healthy and this is because they are creating great content. The difference is that consumers will consume great content in whatever form they choose. To me it might be a ‘TV show’ but for the younger consumers it is just a ‘show’ and, therefore, we too also have to look at it from that angle too. It is no longer traditional media or new media as it is all crossed over. It is just a different way of looking at it.

Stephen Li
There is so much more choice that it has just upped the ante in the quality of the content.

A lot has been spoken about the rapidly growing digital market in India. What are your thoughts on it?

Stephen Li
The digital medium is still very much in its infancy in the country. Out of the 1.2 billion people in the country a lot of these people are in rural areas and we have just scratched the surface. I think considering the scope of the rural market and the proliferation of smartphones. Once you have a larger and more efficient broadband network in the country along with wireless communications, this will further tip the scale. But I think India is just scratching the surface at the moment. If I look at the ad spend in the country, it might be just about 10 percent of the overall spends in the market. Compare this with some of the more mature markets, where digital spends have already reached 30 per cent. But I think India will get there but it will take a different route.

Charles Courtier
I think the development in the country will take the route as in other countries. We talk a lot about the development of entertainment but it is the connectivity that it gives the rural areas and this is true all over the world. Also, the access to information that is life-saving. Look at all the technology that is being built around health; this will spread like wildfire, just like it does in lot of other parts of the world. The economic development of the country will drive this.

Stephen, you mentioned that India might take a different route when it comes to digital growth. Can you elaborate a bit more on this?

Stephen Li
I think it will fast track and skip one or two generations. This is not just in India but a lot of the developing markets. Vietnam is a great example of a country that was ravaged by war for 20 years and so, by necessity, it has skipped landlines and moved directly to mobile and broadband. That is the kind of fast tracking that is happening in India right now.

One of the other exciting things is the e-commerce wave sweeping the country. If you combine this with the proliferation of smartphones in the country, you have a very strong proposition.

When we speak about growth of digital ad spends, is it going to be a case of cannibalisation or overall increase in ad spends?

Charles Courtier:
Honestly, both happen but the cannibalisation depends on where the consumers go. If I take the most extreme example; the collapse of newspapers in the US, the conversation is always that digital ate the lunch of newspapers. It did do that to an extent, but actually what happened was that the consumer decided that they were going to consume their content online for free.

But the smart ones adapt to the new world. And this is point about there no longer being any difference between traditional and new media. If your content is good enough, you will adapt it and live healthily in the new world, depending on the form of delivery that the consumer wants.

If you are the CEO of a newspaper and you have decided that you are never ever going to change your product, then you have a big problem coming down the way. But if you are flexible and adaptable in the delivery system there is no reason why you do not have a brilliant future ahead. So, when we talk of the New York Times, we think of a physical newspaper but there is no reason why it just has to be that. It’s about responding to the consumer and not sticking to traditional thoughts and ideas.

Do budgets move from one medium to the other? Definitely. In the UK, there is more ad money online than in television. There will be many markets where this will be true ultimately.

In markets like India, you do see that though consumers are moving in a new direction, at times advertisers and publishers are not quick enough to change their traditional approach or appreciate the need for change.

Charles Courtier
That does tend to be an issue for us. In any market that is changing quickly, you always have some proponents who move fast, sometimes too fast, and then you have others that move at a slower pace and, sometimes, these have a very good reason for it. The issue is that, in the end, we are all going in the same direction. Very few people are standing completely still. So we are all in the continuum somewhere but maybe at different positions of change. As a media planner, the best you can do is give the right advice but sometimes people will take your advice and sometimes they will not. It is an issue but it is not a problem, because in the end even if we are moving at different speeds, we are moving in the same direction.

Whenever a market is evolving or changing very fast, that too becomes an issue because we need to develop so many new skills all the time to keep pace with what is going on. The reality is that we invest ahead of the revenue; we have to. The tricky bit for us is to get the balance right. So we invest in the future but not so much that we are unable to run a healthy business. It is not easy.

Gaming industry to come together for 'e4m Game ON - Online Gaming Summit' on 18,19 March
38 minutes ago

Gaming industry to come together for 'e4m Game ON - Online Gaming Summit' on 18,19 March
38 minutes ago 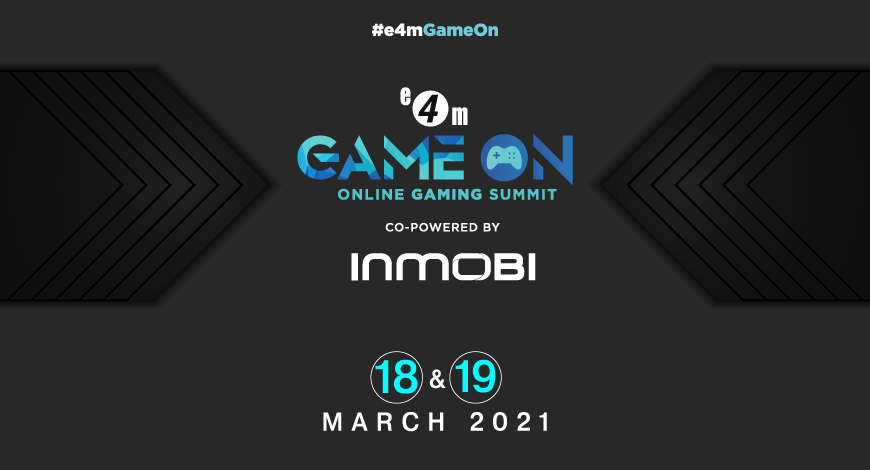 digital Gaming industry to come together for 'e4m Game ON - Online Gaming Summit' on 18,19 March
38 minutes ago