#INDvPAK becomes the most tweeted about ODI on Twitter with 2.9 million tweets

The rain gods called off the clash midway, but that didn’t stop the India-Pak match of ICC Cricket World Cup to go viral on social media. With 95,329 total number of unique users, Twitter India saw record tweets on the match. At a total count of 2.9 million tweets, the match is one of the highest engagers.

Comparing the official hashtags like #TeamIndia and #WeHaveWeWill, as well as the number of Tweets mentioning Indian cricketers and Pakistani cricketers, the Indian side dominated the conversation on Twitter. 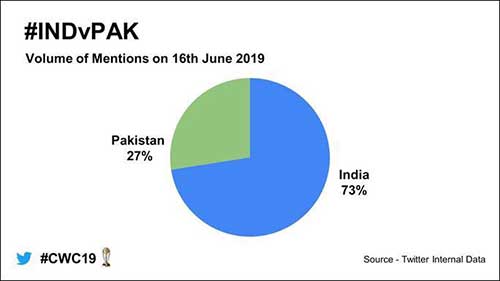 According to twitter India, Indian cricket captain was the most tweeted player whereas Rohit Sharma was the second on the list, thanks to his epic 24th century. Followed by Pakistan captain Sarfaraz Ahmed, all-rounder Shoaib Malik and Indian wicket-keeper MS Dhoni.

The most tweeted about moments from #INDvPAK basis the conversation peaks Tweets per minutes were Vijay Shankar taking a wicket off his first World Cup ball,  Rohit Sharma’s brilliant innings of 140 runs; his second 100 of #CWC19; rain interruption in the first half of the innings during Team India’s batting.

Fans love when their heroes perform on the field. A Tweet by @ImRo45 celebrating his 2nd century of #CWC19 became the most retweeted tweet from Sunday’s match.

Top performance by the team. Thanks to all the fans for turning out in large numbers. ?? ???? #CWC19 #INDvPAK pic.twitter.com/BBGJ0Tbbvz

We both are from INDIA and in this case, AAMCHI MUMBAI as well....So heads I win, tails you lose! ? https://t.co/doUMk1QU2b

digital e4m-infobip webinar: Digital will be the flag bearer for retail in 2021
2 days ago