How brands made the most of #SixWordHorrorStory on Twitter

This trend was taken as an opportunity by brands to showcase their creative side and come out with clutter-breaking captions. Even Google India jumped on the bandwagon of the #SixWordHorrorStory with this tweet: 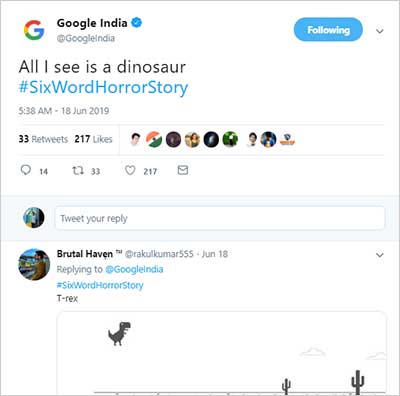 Exchange4media spoke to brand experts about this trend.

Shourya Ray Chaudhuri, Managing Partner, Creative Head (South), Tonic Worldwide, said, “While latching on to a trend is not new, I love it when brands try to twist it to their tongue. Some fail miserably but others succeed.”

“This trend works well in a fast-paced world like ours where people do not have time to read a lot. This new trend of telling horror stories in six words captures the attention of the audience within a short time span,” he added.

Aakriti Sinha, Director, Social, Isobar, said, “Tiny tales has been a trend for a while now, but thanks to American writer Gail Simone (@GailSimone) #SixWordHorrorStory resurfaced again and in a big way. Brands did latch on to the conversations soon enough and the epic cola-war as always made maximum buzz.”

She added that what stood out amidst all the stories was how effectively issues like global warming, climate change, LGBTQ – Pride Month, etc, were brought to light.

“For Nat Geo, we have used the stories to take forward our #PlanetOrPlastic campaign and for our automobile sector brands like Honda, we have focused the stories around road safety and rash driving,” she added. “Since the brands have used this trend effectively for the causes they support, we also took a lighter route through CEAT tyres and shared funny stories related to journeys and driving on Indian roads.”

According to Jagdeep Kapoor, CMD, Samsika Marketing Consultants, a horror story makes you sit up and shudder. “There is twist, there is a turn. Not a surprise, but a shock. All advertising tries to make the consumer, sit up and take notice. And if it is compact, it is even more striking. Brands get noticed and leave an impact. Even if it is horror driven,” he said.

‘Beautiful eyes. Thanks. I collect them’, is Kapoor’s take on the trend that could be used by brands that associate with eyes from specs to a kajal brand.

A horror story gives a reader an adrenaline rush, it's what you detest, but what you cannot resist.

Speaking about the trend, N Chandramouli, CEO, TRA, said, “Whether the hashtag piggybacking is done for a cause, or against the competition, it is virtually harmless, and therefore acceptable. However, it fails if it does not evoke emotions as strong as horror. If it is humour, then it has to make audiences break into a laugh, if it's empathy then it has to move audiences to tears. Else, most of the brands using this hashtag have fallen quite flat because they failed to connect with the audiences.”

Chandramouli also stated that there were many #fail replies to brands which used the original hashtag ineffectively. “A smart person will know to remain silent when there is not enough to say. Brands should follow that maxim too, and be silent when the perfect hashtag response is not forthcoming,” he added.

Check out how some brands leveraged from this trend: 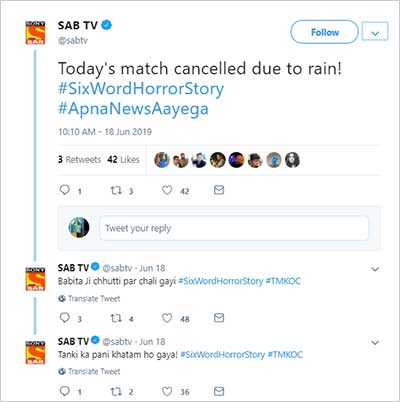 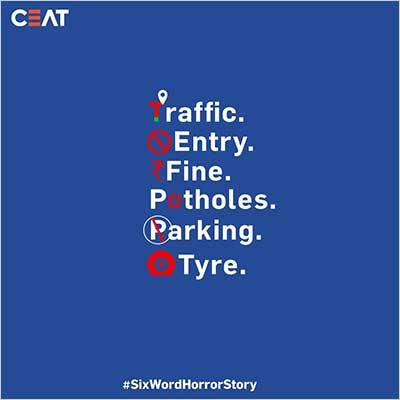 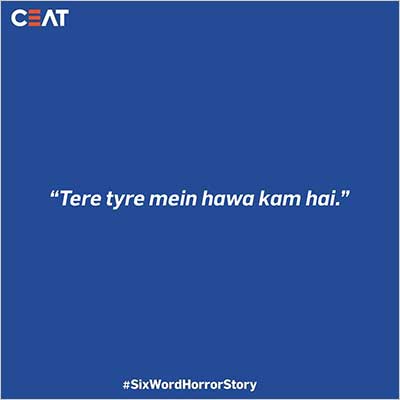 'Digital is becoming synonymous with mobile now'
14 hours ago

Voice Search to be huge in next 3 years, say panellists on Indian Brand Conclave
19 hours ago

Pepsi pays tribute to ‘King of Spices’
11 hours ago

End of an era: Reminiscing ad moments of the iconic MDH Uncle
11 hours ago

‘If a brand wants to build an enduring legacy, it will have to talk about social change’
19 hours ago

The starting point for a brand is to create what you want it to be: James Curleigh
20 hours ago