Sir John Hegarty loved IPL ads that were Indian. This begs the question: what is Indian and is Indian exclusively desi?

The reach of the Indian Premier League (IPL) is vast. In 2018, it had a combined reach of 769 million viewers with Hotstar contributing 202 million. The final match between Chennai Super Kings and Sunrisers Hyderabad last month garnered 55.6 million impressions. Twenty-two per cent of the IPL viewership came from the regional language broadcasts. Star India promised to go “deeply local” this IPL, launching multiple regional language channels to tap into the viewership from Tamil Nadu, Karnataka, Andhra Pradesh, Telangana, and West Bengal.

The IPL, now in its 11th year, presents a unique platform to advertisers; it garners a loyal viewership across demographics. Brands ranging from FMCG and automobile to paints and adhesives; all jump on the IPL bandwagon cashing in on the annual sporting extravaganza. They all craft a special IPL ad speaking the language the nation is speaking -- cricket. These are India’s equivalent of the SuperBowl ads. 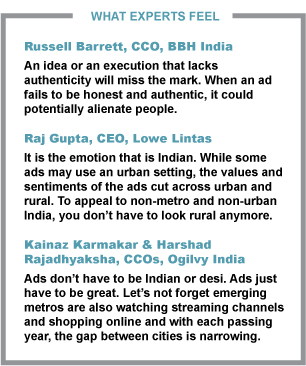 Ad world legend Sir John Hegarty watched these ads and had an interesting observation to share. He said the ads that stood out were the ones that gave him a taste of India. He could count only a handful of ads that truly inspired him and stayed true to the Indian context. This begged the question: what’s Indian and is Indian exclusively ‘desi’?

Indianness is fairly varied and textured. It's as diverse, in fact, as India herself. But what really connects our audience to the message is authenticity.

An idea or an execution that lacks authenticity will miss the mark, points out Russell Barrett, CCO, BBH India. The Indianness factor aside, Barrett says, what he looks to achieve with his ads is communication that is authentic to the audience the brand taps into.“When an ad fails to be honest and authentic, it could potentially alienate people,” he says.

Even though the IPL is a media event that gives brands a massive opportunity to speak to various strata of society, "a smart brand will still sharply speak to its core audience," Barrett says. "A really good idea might even use the context of the IPL for a more entertaining and memorable campaign, but you can't forget who your audience is," he adds.

It is all about striking a delicate balance with a clutter-breaking but not niche enough communication that could alienate viewers.

Kainaz Karmakar and Harshad Rajadhyaksha, both CCOs at Ogilvy India (West), say, “Cricket runs in the pulse of the country, irrespective of the socio-economic standing of the cities. So when an agency is briefed on an IPL campaign, the task is exciting and daunting. Your idea and execution has to not just be on the brief but also breakthrough to be noticed. Your humour or emotion cannot be so niche that it excludes anyone watching the match.”

Raj Gupta, CEO of Lowe Lintas, believes it is the emotion that is Indian. The IPL ad by Lowe Lintas for Swiggy that encapsulates the promise of no-minimum order with a viewer’s desire to sneak in a quick gulab jamun during the ad break has been loved and shared this IPL season.

Ads are also limited by the purchasing power and where it is concentrated in India. Gupta says that while some ads may use an urban setting, the values and sentiments of the ads, like in those of the Surf Excel or the Tanishq ads, cut across urban and rural.  “To appeal to non-metro and non-urban India, you don’t have to look rural anymore,” he believes.

Karmakar and Rajadhyaksha are the creative minds behind the Aamir Khan ad for the latest Vivo phone, which is another favourite this IPL season.

What’s not to love about Aamir Khan, a cat, and a dog all in the same fame promoting an unlikely product -- a phone! With a few tweaks, this ad could work in any part of the world. They believe that ads don’t have to be ‘Indian’ or ‘desi’.

“Ads just have to be great. Let’s not forget emerging metros are also watching streaming channels and shopping online and with each passing year, the gap between cities is narrowing,” they say.

Indeed, the gap is narrowing and the aspirations are getting bigger and bigger. Amazon India tapped into that sentiment of small-town India last IPL and this year too.

Amazon India is the one-stop shop that makes everything accessible to the Chonkpur Cheetahs who have big dreams to play in the Indian Premier League. It has all the flavours of small-town India right down to the well-thought-out names and character attributes for each player in the team.

But does this really work for people watching the ad from small-town India?, wonders Prathap Suthan, CCO Bang In The Middle. He feels that this ad may appeal to a different class of people who may already have access to the things Chonkpur Cheetahs are still looking for. And that the small-town viewers may instead have aspirations to be the Aamir Khan in the Vivo ads.

In the end, there is just one thing that matters, and that’s not whether an ad was Indian or not. In the wise words of Karmakar and Rajadhyaksha, “If you have created an IPL campaign that has been remembered, recalled and sold your client’s product, then you have done your job very well. You can treat yourself to a nice meal.” 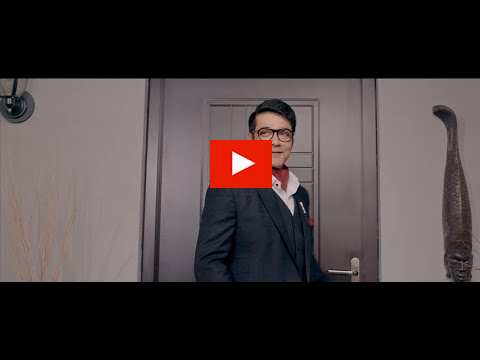