Guess what OOH media owners do with vacant spots?

During a dull period, one often gets to see blank outdoor spots or at the most, the name and number display of the media owner which could be used for booking details. Few smart players have turned this into an opportunity and are using vacant OOH media innovatively. From undertaking social initiatives to being vigilant about vandalism, outdoor media owners are using such spots to grab attention of the masses.

Rings-A-Bell, sole advertising agent for BEST’s seatback, observes one world day each month that is relevant to Mumbai masses. “BEST seatback communication is very relevant for creating cause-based awareness. That’s because the communication it delivers is consumed when people are ‘in action mode’. Transit audience or passengers are not just highly receptive, but also openly responsive to advertising messages”, explained Atul Bothra, Business and Communications Director, Rings-A-Bell.

The agency recently ran two successful campaigns on spreading the message of using eco-friendly Lord Ganesha idols and responsible use of water. Rings-A-Bell is also running a campaign during Diwali, urging passengers to use eco-friendly crackers. Another one during the month of December for World Aids Day is also in the pipeline.

One can recall that Bright Outdoor Media had rolled out a social awareness campaign called ‘We love Mumbai’ where the agency created a unique position in the outdoor advertising space with its innovative displays at prime locations in Mumbai.

JCDeaux on the other hand has looked upon curbing vandalism since the beginning of its India operations. The agency believes in a certain ‘broken window’ theory.  The agency summarises the theory in the following characterisation, if a factory or office window is broken, a passer-by observing it will conclude that no one cares or no one is in charge. In time, a few will begin throwing rocks to break more windows. Soon all the windows will be broken, and people will think that not only is no one in charge of the building, no one is in charge of the street, and more and more citizens will abandon the street to those they assume prowl it.

The theory goes on to support the notion that by addressing small problems at their roots, cities and their citizens can prevent them from developing into larger social ills. Following this theory, JCDeaux has reinstated its street furniture formats to discourage vandals and miscreants.

Commenting on this initiative, Pramod Bhandula, Manging Director, JCDeaux India said, “We have observed that we have been able to achieve some success in decreasing vandalism, especially in New Delhi Municipal Council area. We have started covering up the vandalised medium with a specially fabricated cover. This is not a commercial campaign, rather it’s a message aimed at increasing awareness in general public about these incidents of vandalism. Through the latest series of messages, we are trying to appeal to the general public to support in curbing these acts of vandalism. Citizen’s participation to protect the street furniture is important; ultimately it has been installed for providing services to them.”

These are just few examples; usage of unused or blank spots has a lot of potential. They can be used as part of corporate social responsibility of the agency or to raise valid issues or create awareness about relevant aspects of the society. They can be used innovatively to connect with prospective TG and encourage recall...the options are many. This is a dynamic space and it will be interesting to see how many agencies wake up to this opportunity. 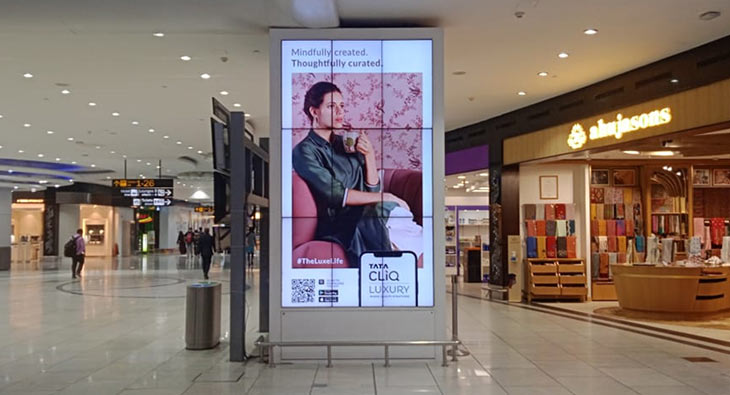