In a setback to Star India, the Supreme Court on Tuesday dismissed its appeal challenging the tariff order of the Telecom Regulatory Authority of India (TRAI) paving way for implementation of the tariff order passed in 2017. 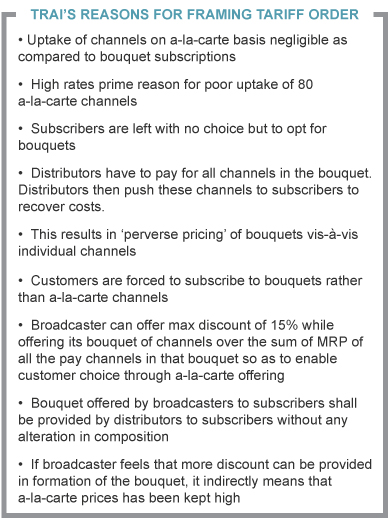 In the123 page judgement,  the Supreme Court uphold the authority of TRAI to regularise pricing in public interest and that by controlling pricing it did not violate the Copyright Act.

“We are clearly of the view that if in exercise of its regulatory power under the TRAI Act, TRAI were to impinge upon compensation payable for copyright, the best way in which both statutes can be harmonized is to state that the TRAI Act, being a statute conceived in public interest which is to serve the interest of both broadcasters and consumers, must prevail, to the extent of any inconsistency, over the Copyright Act which is an Act which protects the property rights of broadcasters. We are, therefore, of the view that, to the extent royalties/compensation payable to the broadcasters under the Copyright Act are regulated in public interest by TRAI under the TRAI Act, the former shall give way to the latter. As there is no merit in these appeals, the same are, therefore, dismissed.”

The two-judge bench comprising Justice Rohinton Fali Nariman and Justice Navin Sinha further explained that the issue of copyright Act and TRAI Act did not infringe on eachother. "The interest of the end user or consumer is not the focus of the Copyright Act at all. On the other hand, the TRAI Act has to focus on broadcasting services provided by the broadcaster that impact the ultimate consumer. The focus, therefore, of TRAI is that of a regulatory authority, which looks to the interest of both broadcaster and subscriber so as to provide a level playing field for both in which regulations can be laid down which affect the manner and carriage of broadcast to the ultimate consumers," the judgment added.

Early this year, Star had approached the apex court questioning TRAI’s jurisdiction to frame tariff order on the grounds that the authority has no jurisdiction on content as that actually comes under Copyright Act and not TRAI Act.

The appeal was filed against the fractured judgement passed by a two-judge Bench of Madras High Court comprising Chief Justice Indira Banerjee and Justice M Sundar. The bench had given a split verdict. Justice M Sundar had ruled in favour of Star. Commenting on the judgement delivered by Justice M Sundar, the Supreme Court order stated, “I am unable to agree with the conclusion of M. Sundar, J. that the provisions of the impugned Regulation and the impugned Tariff Order are not in conformity with the TRAI Act. In my view the impugned provisions neither touch upon the content of programmes of broadcasters, nor liable to be struck down.”

“However, the clause putting cap of 15% to the discount on the MRP of a bouquet is arbitrary. The said provision is, in my view, not enforceable. In my considered view, the challenge to the impugned Regulation and the impugned Tariff Order fail,” the order read further.

Spends on Covid-19 vaccination campaigns can be considered as CSR: MCA
2 hours ago

How has Covid reshaped the marketing funnel? Find out from the experts at e4m Conclave
8 hours ago

media-tv Truth is a scarce commodity these days: Vir Sanghvi
1 day ago