How can brand influencers minimise their social media gaffes

Issuing an apology before deleting the erroneous social media post can restrict the damage to the image of the brand and the influencer, say experts

Influencer marketing has created quite a buzz in the last few years. While several brands have collaborated with various influencers to increase their brand awareness, there have been a few Oops! moments too.

Influencers play a crucial role between the brand and the market reach. They’re a trusted voice of the brand as they have already established a following among people and have the power to influence others.

In one of the recent gaffes by a brand influencer, actor Disha Patani drew a lot of flak for a ‘copy-paste’ error in one of her promotional posts on Instagram.  Although she was quick to delete the post, it had already been noticed by her 17 million followers. Patani was also the butt of several ridicules.

However, Disha is not the first actor to goof up on the internet. Anushka Sharma was also trolled for promoting Google Pixel 2 XL phone on Twitter, using an iphone. Popular American YouTuber Marques Brownlee was the one to notice the blunder and was prompt in tweeting about it.
Sharma was also trolled heavily and the post by Marques was liked over 48,000 times in just one day. 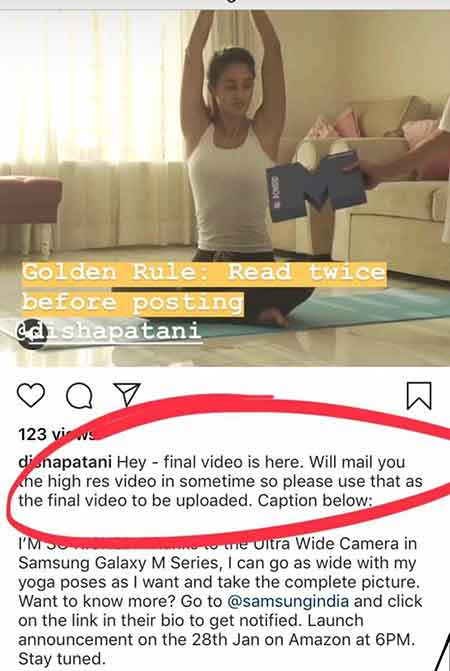 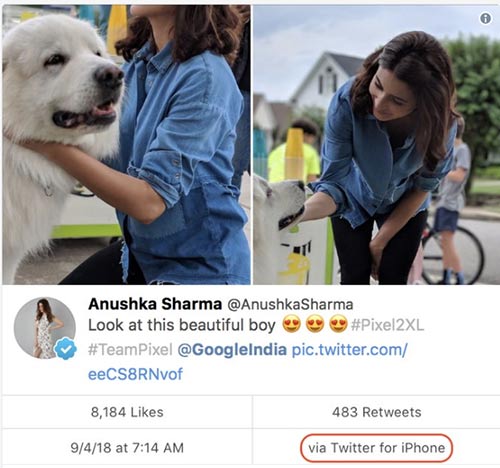 Cricketers like actors are big brand influencers too. Skipper Virat Kohli, despite his several successes on the field, was slammed by his critics and followers alike for his caustic reply to a cricket fan who had said he likes English and Australian batsmen more than Indian players. Kohli retorted: “OK, I don’t think you should live in India then.”

In another gaffe by a celebrity, again revolving around cricket, actor and IPL Kings XI Punjab co-owner, Preity Zinta in a tweet congratulated Kohli’s team for being the first to win a “Test match” in Australia. The Twitterati were quick to point that it was not the team’s first Test match victory Down Under but the first Test series win in Australia.

So, how much damage do these blunders cause to the image of the influencers? We asked brand experts as to how influencers fix their gaffes and restore their following.

N Chandramouli, CEO, TRA, said, “Whenever celebs make a blunder, especially on the social media, it becomes viral in a few minutes, which ultimately hurts their brand value too. Blunders, if in the normal course of things, is only human and if accepted by the celeb, can humanise them among the fans and make them more relatable. But, if the blunder is more than that, and ends up revealing an underlying personality of the celeb which is inconsistent with the projected image, it can hurt their followers who would have felt cheated.”

A celeb is very much under public scrutiny and, therefore, must be prepared well before any public interaction to minimise blunders. “In case, an error does happen, the celebs can show embarrassment and maybe even apologise for it, Chandramouli added.

Brand expert Aman Abbas, Co-Founder, Commwiser Consultants LLP said, “It’s important that celebs stay vigilant to catch these mistakes early. Secondly, it’s important to respond to it quickly. So in case something is posted by mistake people would’ve taken screen shots before it being deleted. So they should definitely delete it but at the same time clarify that the mistake happened inadvertently. It’s important to be honest and be ‘matter of fact’. Once this is done, then any kind of engagement should be avoided.”

What should celeb influencers keep in mind while associating with a brand for social media promotion?

According to Swati Nathani, Co-Founder, and CBO, Team Pumpkin: “Celeb influencers must keep in mind if the genre of brand they are promoting suits their persona. I have noticed that many a times when the celebrity endorses a brand it doesn’t necessarily fit into the target segment that the brand is catering to. Also, they must have an understanding of the message they are promoting and the impact it would have on the TG, and if they relate to it.”

On the other hand, Aman says, “While brands do proper study and due diligence before choosing an influencer. Influencers too need to think twice before endorsing a brand. Celebs should look for relatable and relevant brands and evaluate whether their audience can relate to the brand or not. Since working with a brand to which your followers cannot relate to may lead to disinterested audiences. Secondly, due to large following of these influencers, they should be ultra-careful before posting any content on their social platforms. Any careless glitch puts them in a bad light, as we witnessed in a recent case.”

With photoediting apps that alter appearances to perfectly curated content on social media, it is getting tougher to spot authenticity. We asked the experts, how it is damaging the influencer marketing space these days?

Chandramouli said, “There is a small but significant movement globally to ensure authenticity of images and a few celebrities are refusing to get their images photoshopped. This is an important stance as fans of celebs often aspire to be like them, and making images picture-perfect gives fans a wrong aspirational target. Digital enhancement is often not noticed by audiences. It has the same effect as artificially padded news versus authentic news. However, if it gets noticed by the viewers, the celeb's aspirational quotient falls dramatically in the viewer’s eyes.”

As per Aman Abbas, “Influencer marketing helps a brand to gain audience through public icons who people trust and follow, but these photoediting apps sometime show these icons in a wrong light. And before the influencer reacts, Internet goes berserk with trolls and it does dent the reputation of that influencer. It’s important that the influencer be very vigilant and come out boldly with rebuttal without losing any time.”

Bobby has to lead us from good to great in our creative business: Chris Hirst
5 minutes ago

39% Indians open to women as head of government, 34% comfortable with female CEOs: Kantar
2 hours ago

GOAFEST 2020 ANNOUNCES JURORS FOR ‘THE RED ABBY’
16 hours ago