Sony Pictures Network (India), the official India broadcast partner for FIFA World Cup 2018, is all set to kickstart what can safely be called the most exciting global sporting event, on June 14. The broadcaster has already roped in almost 15 brands and is in talks for more associations. As of now, Hero, Association of Mutual Funds in India (AMFI), Honda Motors, VW, Apple, Parle Agro, Castrol, Apollo Tyres, Uber, Indeed, Carlsberg, Amul, HDFC MF, Airtel and Adjavis are the finalised sponsors.

According to industry experts, the key packages i.e title and presenting sponsorship is ranging between Rs 10-15 crore. “Associate sponsors deals are standardised so it's not easy to compare but it can be between Rs 3-7 crore depending on the involvement of the brand while spot buyers is Rs 2-3 lakhs,” said a senior media planner on the condition of anonymity. 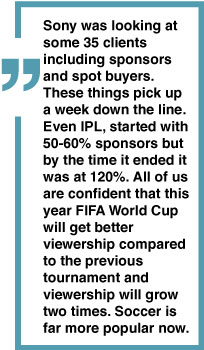 “Revenue is obviously going to double or triple because in the last tournament (in 2014) a spot would cost around Rs 50,000 (on the higher side) for 10 sec as against Rs 3 lakh for the same duration this year,” said another media planner.

Rohit Gupta, President, Network Sales and International Business, SPN, said, “We got a lot of brands on board for the tournament. Hero and AMFI are the two big sponsors at the top level and then we have other brands at associate sponsorship level such as Honda Motors, Apple, Parle Agro and many more. We are still in the process of selling inventory.”

Vineet Sodhani, CEO, Spatial Access, said, “Initially, the response was quite slow as everybody was trying to get over the IPL. There were some hard negotiations on rates but more or less it has settled now. The clients have got their side of bargain. Sony was looking at some 35 clients including sponsors and spot buyers. These things pick up a week down the line. Even IPL, started with 50-60% sponsors but by the time it ended it was at 120%. All of us are confident that this year FIFA World Cup will get better viewership compared to the previous tournament and viewership will grow two times. Soccer is far more popular now.”

Dinesh Vyas, Vice President, PHD, also felt that last minute might see the arrival of many sponsors. "The difference between IPL and FIFA is that the latter (like it or not) is a male-dominated sport and will be watched by much more of a younger audience. So you might see a lot of categories targeting a younger audience. Sony is trying to make the most of it this time because it falls on the Indian prime time (first match begins at 5.30pm IST with the next match at 8.30pm and following at 11.30pm)," said Vyas.

Vyas told that FIFA, which is a shorter format than IPL, will bring in additional viewers who want to be part of the football fever (unlike the hardcore league-following fans). He explained, "They are probably those who don't follow the sport regularly but want to be part of it." We believe this is how Sony is trying to sell the game to the sponsors too.

Talking about the advertisers' response, Gupta said, “Football World Cup comes once in four years hence advertisers' response has been very positive. All the large brands are on board and that's what we were expecting because football engagements levels are very high especially for the youth as it's the big sport for them. We are still under some negotiations and are hopeful to close more deals.”

About Sony selling separate inventory for TV and digital, Gupta informed that some of the TV sponsors will be the same on digital but it will also have some exclusively digital clients. "Various brands are getting associated there as well since football is a friendly sport. On OTT platforms, I don’t think getting sponsors will be problem.”
Though according to highly placed sources, on digital, Sony has five-six sponsors and out of them only two are exclusively for digital.

The FIFA World Cup 2018 will be held between June 14-July 15 in Russia. Sony Network will broadcast the tournament in six languages- Hindi, English, Bangla, Malayalam, Telugu and Tamil.

Going by FIFA's claims, 1.013 billion individuals globally watched the final match between Germany and Argentina in 2014, with Germany winning the Cup, making it the most watched sporting event in history at that time. The numbers clearly mean that SPNI has a winner in hand both sponsorship wise as well as viewership.
Let the games begin!
(With Inputs From Madhuwanti Saha)

Greeting people with salaam-namaste is stylish, say Salman Khan and Pepsi
21 hours ago

We got 100X value back with our investments in Ramayan & Mahabharat: R S Sodhi, Amul
22 hours ago

e-Content Jam: 'Give relevant and good content to audience, they will surely engage'
22 hours ago

e-Content Jam: ‘Ethical marketing to be key in post-COVID times’
22 hours ago

e-Content Jam: Why influencers have become crucial for brands in lockdown
22 hours ago