Youth (in the age group of 15-30) contribute 33 per cent of TV viewership, whereas adults (31-50 years) have the second highest contribution of 32 per cent in the total viewership. Children, meanwhile, contribute 20% viewership.

For all those who agree with the popular belief that the youth of today do not like watching television, this could be a surprise!

Youngsters in India contribute a staggering 33 per cent share of eyeballs in the overall television viewership, according to a latest report released by the Broadcast Audience Research Council (BARC).

According to BARC, youths (in the age group of 15-30) contributes 33 per cent of viewership, whereas adults (31-50 years) have the second highest contribution of 32 per cent in the total viewership. Children, meanwhile, contribute 20% viewership.

The figures make us wonder what is the youth watching on TV? Well, the answer to the question lies in the BAARC report ‘What Young India Watches’.

These facts assume importance because in today’s fragmented and increasingly competitive television scenario, everyone is vying for the attention of the youth segment. One needs to look at it not only from a TV content point of view, but also to understand how to target and reach out to this segment more effectively.

Let us first understand the demographics of the much sought-after youth segment, by comparing the share of viewership with the population composition. This will give us a holistic view of the viewership of this segment. 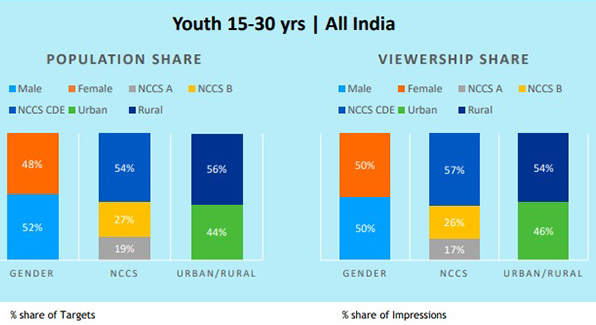 The youth population composition is relatively skewed towards males. But when we look at the viewership share, we see that the female viewership is comparable to that of the males. Both contribute an equal share of eyeballs to TV viewership, i.e. 50 per cent each.

Looking at the socio-economic classification, NCCS CDE emerges as the largest contributor, with more than half the viewership share among the youth. While one may say that this could be due to the size of the NCCS CDE population, the report looks at it in terms of the share of population across NCCS and witnesses that the youth from NCCS CDE are over-indexed in comparison to the youth from NCCS A & B.

Furthermore, looking at the urban-rural split, the viewership share of rural India is higher. But it is the youth in urban India that seems to be spending more time on television in relation to the population share.

When it comes to the trends across weekends and weekdays, the viewership is the highest during prime time. As per the data, viewership starts from 6:00 am in the morning, rises gradually through the day, and peaks between 8.30 and 9.00 pm.

While the reach and the impressions peak between 8.30-9.00 pm on both weekdays and weekends, the gap between reach and impressions is marginally higher on weekends, indicating that there are not enough conversions when compared to the weekdays. This may likely be due to other activities competing for the attention of the youth, and hence there is a scope to create compelling content to attract more youth audience here.

It is also surprising that TV viewership among the youth remains almost at the same levels across weekdays & weekends, with minor deviations. This may break the notion that the youth watches more TV during weekends. 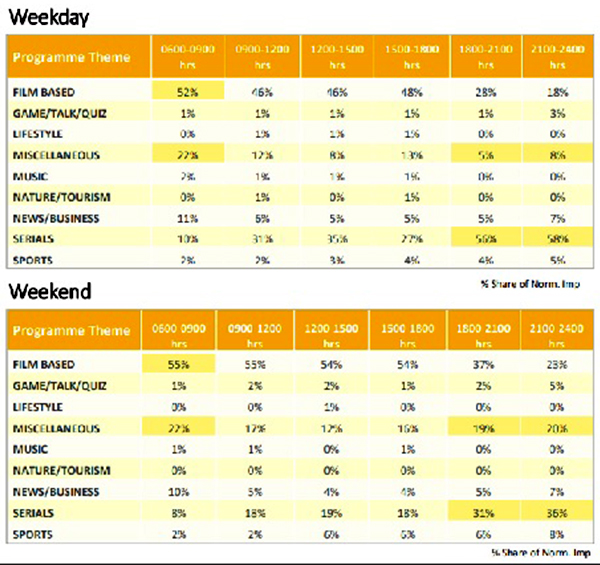 Further, TV viewing pattern is different for different regions. The youth in rural India prefers to start the day relatively early as compared to the youth in urban areas and the metro cities.

The viewership graph for the youth rises in rural India from 5:30 am. Viewership in urban areas begins an hour later, from 6:30 am, while the viewership in mega cities begins even later, i.e. 7:30 am onwards. 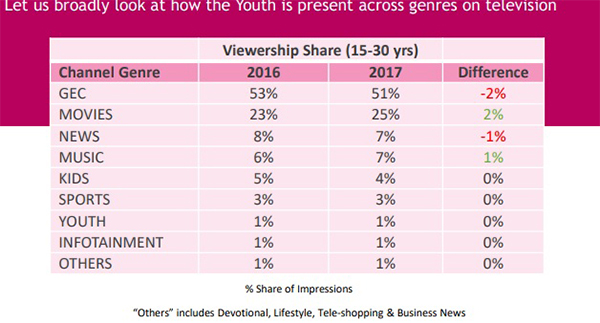 One interesting and important point that the report has made is about the genre growth. The General Entertainment Channels (GEC) dominates the genre viewership pie with the highest share of eyeballs (51%), followed by Movies (25%). These are the two biggest genres on television. But if we compare the share with the last two years i.e 2016 vs 2017, GEC has witnessed a decline of 2% share in 2017. Whereas the movie genre witnessed a rise of 2%, which also shows the interest of the youth in the genre. Apart from GEC and movies, music is another genre which is grown by 1 %. According to the research, the youths are willing to try and buy new products, which makes them an important consumer segment for all marketers and advertiser. However, the preferences and capacity of purchase differs as per the demographics.

Mass-advertising sectors such as personal care & hygiene and F&B account for 50% of ad impressions from the youth in both rural towns and mega cities. These are also the most advertised sectors, and hence volume may be leading to viewership.

Also, advertising for high involvement sectors such as auto and durables is more effective among the youth in mega cities than in rural areas. This is also true for service sector, which is heavily dominated by internet services and e-commerce category. 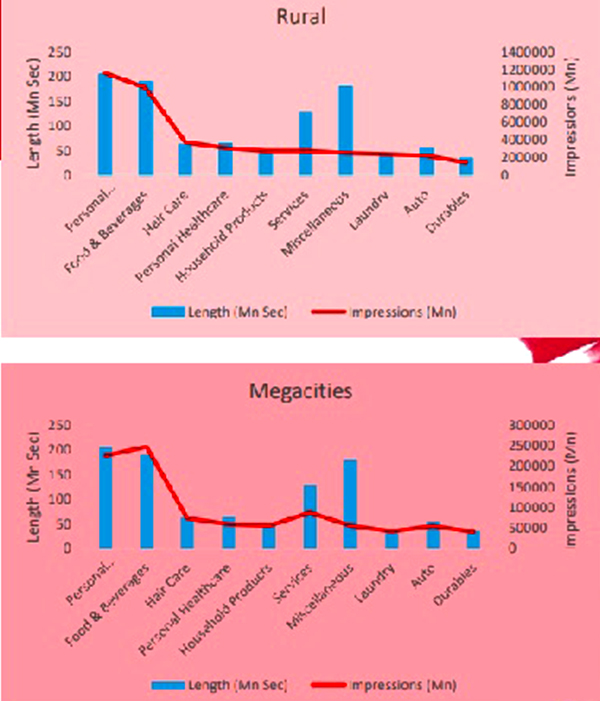 Do not resume news ratings till we examine committee report: MIB tells BARC
19 hours ago

media-tv Do not resume news ratings till we examine committee report: MIB tells BARC
19 hours ago