Nadia Chauhan, Parle Agro’s Joint MD and CMO, spoke to exchange4media on roping in Salman Khan as their brand ambassador, association with big televised properties and their plans ahead

Beverage major Parle Agro recently signed Bollywood superstar Salman Khan as the face of its popular brand Appy Fizz. The first campaign featuring the new brand ambassador, which is out, is playing an integral role in upping the growth and penetration of the brand, said Parle Agro’s Joint MD and CMO Nadia Chauhan in a chat with exchange4media. 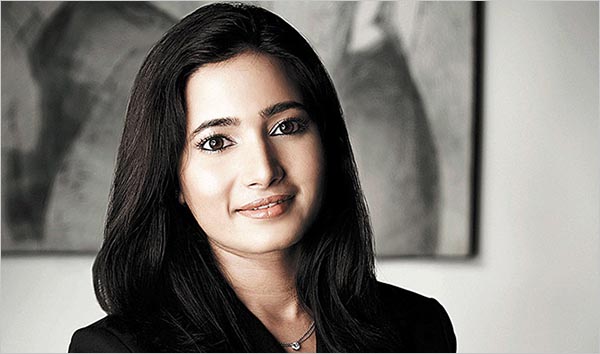 Chauhan spoke about the brand’s visions, association with big televised properties and their plans ahead.

From fruit to fizz
Reminiscing the brand’s journey, Chauhan shared, “Ten years ago when we launched the brand, it was a launch of a category by itself. We introduced the fruit plus fizz category in India. When we launched Appy Fizz, it was a completely new product and novel concept and was meant to cater to a very niche market. It was also priced at a premium.”

Chauhan said the brand has been steadily investing in the category and building it year after year. “It’s been quite a phenomenal journey because it’s been one of our fastest growing brands. We’ve been able to create a category of almost Rs 700-800 crore. Today, we are the only one in the category despite many attempting to enter the space. We’re growing at 40-50% YoY,” she revealed. 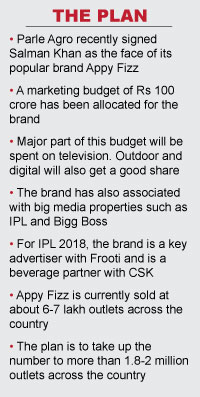 Communication, creativity and connect
Chauhan stated that the need was to employ a marketing strategy that can penetrate and scale up the brand to the next level. “The very reason for roping in Salman stems from the need to have a brand ambassador who has a greater scale and is able to give that level of impact and penetration. Because our visions are to get to the target of 1.8-2 million outlets on retail basis as well as to make the category much larger than what it is today,” she opened up.

On the campaign, she said, “Taking a brand ambassador with a mass appeal like Salman was to ensure that we are able to create a very good balance in terms of continuing to build the brand image for Appy Fizz, and at the same time, create a deeper connect with Salman and take on a very bold stance, which is one thing that we’ve done with the brand.

When quizzed about how the Rs 100 crore marketing budget is allocated, Chauhan let out, “While television is a lead medium for us, outdoor plays a very big role for all our brands. Besides that, we’ve got investments into digital and a lot of on-ground activities too.”

Riding the wave
The Joint MD confessed that the brand has constantly focused on associating with the largest media properties such as IPL and Bigg Boss. “Bigg Boss is one of the largest properties in the second half while cricket is the largest property in the first half. It has helped us in many ways and I think the most important and critical way is that we have been able to build top-of-mind recall for the brand. The daily format serves as a constant reminder. For a category like us, which is impulse-driven, top-of-mind is one of the most important factors in ensuring that the brand has that purchase factor,” she explained.

For IPL 2018, the brand is a key advertiser with Frooti and is a beverage partner with CSK. “While we have been investing a high amount of our budgets in televised properties, this year we’ve also take them on-ground,” shared Chauhan.

A sparkling future?
When we quizzed Chauhan regarding the growth in the fruit-drink category, she said, “We operate in the category with Frooti and Appy which are growing at 25% and 45% respectively. This year has been a great summer. Though we’ve had extreme weather conditions in certain part of the country, the category is growing well. We’re very happy that over the last three-four years, we have been leading the growth rate of the category.”

According to Chauhan, what gives the beverage brand an edge over others is the fact that it has all-year round flat business. "This is very important in a business like ours because nationally, the beverage industry has more than 65-75% of their business taking place only in the summer. So to have a brand that does deliver stable business is very good for a beverage organization," she contends.

Getting there
Chauhan has her targets set straight. Her vision is to take the brand to Rs 1,000 crore in the next two years. On her gameplan to get there, she says that the priority is to increase penetration and distribution and get to the level of Frooti.

All our campaigns hold a healthy mix of digital & print media: Damyant Singh Khanoria
23 hours ago