Dhawan, Marketing Director, P&G India spoke about Sons #ShareTheLoad ad campaign and how the message of the brand is creating a powerful impact on its viewers

The much talked about #ShareTheLoad campaign by the brand Ariel and conceptualised by creative agency BBDO is bringing about a change. The new segment of the movement focuses on Son’s sharing the load of household chores like washing clothes. Even in progressive households where women are taught to be independent, husbands still depend on their wives to be the primary caretakers of household chores. Ariel wanted to create a conversation about this by making laundry the face of the movement and bring about a social change in society. It started the conversation in 2015 and has reignited it yet again in 2019.

A Neilson survey revealed that in 2015, 79 per cent of men thought that washing clothes was a women’s job and in 2018 this number has reduced to 52 per cent despite the progress there is still a lot more to be done.

Sonali Dhawan, Marketing Director of P&G India spoke to exchange4media and gave us insight into the brand and the eminent campaign which has sparked a social conversation that promises to lead India to a progressive era.

With the #MeTooMovement that went down last year with many allegations being brought to the forefront. How important is it to spread the message of gender equality in India in 2019?

For me, it has always been about spreading a relevant message. Gender equality has been relevant for a long time. I'm very happy that more people and brands are joining this conversation we have started with our #ShareTheLoad campaign.

The #ShareTheLoad campaign started in 2015. How has the creative for the brand changed since then, while still highlighting the message of gender equality?

The campaign has evolved over the years. In today’s panel discussion on the campaign, as Josy Paul of BBDO said ‘Content is king, but context is King Kong!’ The context is very important. When we started out there was a lot of talk about gender equality at work and we were very curious to figure out what people had to say. So, we conditioned a survey and we found this startling piece of information that 79 per cent of women because of household chores have left their job. Seventy eight per cent of men came home and relaxed after work whereas 70 per cent of women came home and did more work after that. For men, weekends were for relaxation whereas women during the weekend took on more work. When it started, the conversation was about inequality at work. As we got into the second year we wanted to go into the reason behind the truth. The truth was already underlined, we wanted to understand what makes it so. We didn’t want to point fingers. It was about looking at it from the point of view of a Dad and why his daughter’s house is the way it is, this allowed people to understand the impact of conditioning. Conditioning in terms of what the father does at home and how we condition our daughters.

This time around we wanted to spark the conversation that laundry is not only a women's job. We made the creative from a son’s lens. Seven out of ten women get an opportunity like a promotion at work but couldn’t take that post because they didn’t have that support at home. We are raising daughters to get an education and work. But we were still raising them to come back home and do the household chores. The reason for that is that we didn’t have a different set of expectations from our sons and bringing that in mind we changed our focus to sons. That’s the conversations we wanted to highlight and that’s how it has evolved over the years. 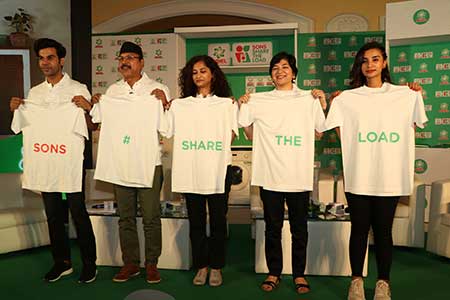 Do you think advertisements have the power to bring about a social change?

You need to try and bring the message across to an audience. I really believe that if you are going to try and bring to the forefront a conversation which sparks introspection it needs to have its space and time. You can’t deliver that in 15-20 seconds. When you need to spark a debate you need to let those films breathe. By default that ends up being slightly longer formats, it can be a TV show or a film. It’s not that it cannot happen in an advertisement, it depends on what message you are sending across and what is the intent of the advertisement. It depends if you are going to spark a lot of self-discovery. Are you going to touch someone’s heart or mind or are you really going to spark a debate?

Take Gillette for instance, where many years ago we just asked a simple question: To shave or not to shave? Brands nowadays are not just about selling the product but they are a huge influence on society and we need to use that influence to bring about a change. Brands have a moral obligation to so.

This ad campaign has inspired a lot of people like Designer Masaba Gupta adding a tag saying washing clothes is a man’s job too in her clothes collection. Did you imagine the campaign would have such an impact?

I think I knew this was going to be the impact. I knew that in my heart, those who feel very passionately about the message will make a difference. When we were having this conversation on conditioning we realised that at the age of two we give our children an iPad but they unfortunately learn ABC from school textbooks that are so stereotyped where a doctor is represented by a man whereas a nurse is represented by a lady.

So, we had this conversation with the publisher Navneet Prakashan and told them you have a role to play as well and they have released a set of books which are much more gender neutral. If you look at both the company’s a textbook company and Ariel, both can have the same commonality of passionate partners coming together. Like our washing machine partner, Whirlpool, has taken this movement to a lot of showrooms and they have done a good job. It’s not just a campaign, it’s a movement and the more people join in the merrier. That is what will bring about change in people’s mind-set.

Vodafone-Idea: How a court verdict boosted marketing spends
6 hours ago

Conversational AI in the times of Covid
5 hours ago

Why is Housing.com spending 60% of marcom budget in its first-ever IPL spot buys?
1 week ago

The reach that IPL offers is unparalleled: Atit Mehta, BYJU’S
6 days ago