Two Editors of The Pioneer and founder of ad agency Happy mcgarrybowen, have been named in the #MeToo movement. Women want to quit toxic work environments

Amid more terrifying revelations of cases of sexual misconduct at the workplace and/or neglected complaints of sexual misconduct, a women’s collective led by Elephant Design co-founder Ashwini Deshpande penned an open letter to the women of the advertising and media fraternities.

In the letter the leading women leaders of the industry observed that their “leadership positions come with immense responsibility and therefore can help trigger a change, start a conversation and help bring the talk on the table.”

Noting that each of their companies has policies and practices in place to tackle sexual harassment at the workplace, they mooted the idea of an independent body that can address harassment across the industry. “We do feel it will only help to have a platform that is agency/network agnostic, easily accessible, backed by women leaders, with a singular focus on addressing harassment across the Indian Advertising, Design & Media industry, at both network and independent agencies. We need to work towards it as an industry,” the letter stated. 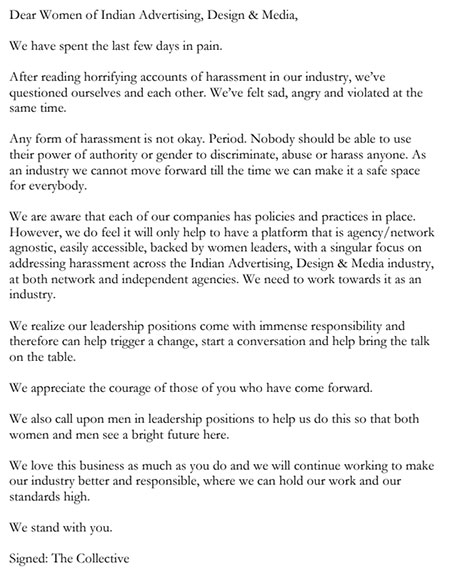 On Wednesday a woman detailed a series of episodes of sexual misconduct by editors at The Pioneer. In her post, the woman said that her immediate boss, Rajiv Sharma, “blatantly announced his interest to sleep with me.” When she rejected his advances, “Rajiv would make my work more difficult than it should have been by assigning night shifts and morning shift immediately the day after. He looked for excuses to humiliate me in front of others,” the woman wrote. 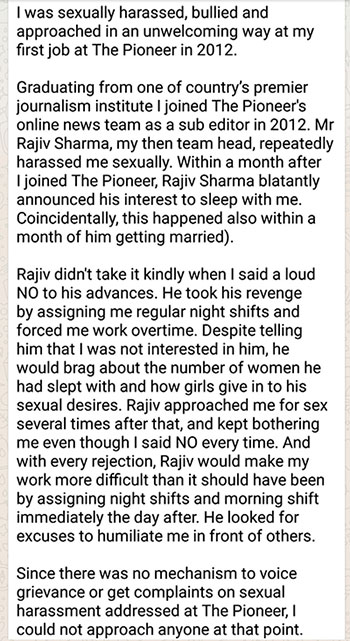 She also called out Arya Rudra, Associate Editor of Millennium Post (the then News Editor of The Pioneer.) Rudra would call the woman at odd hours of the night and launch into unsavoury monologues about his sex life. The woman said that the toxic environment got unbearable for her as a fresher at first job and she quit The Pioneer citing health reasons. 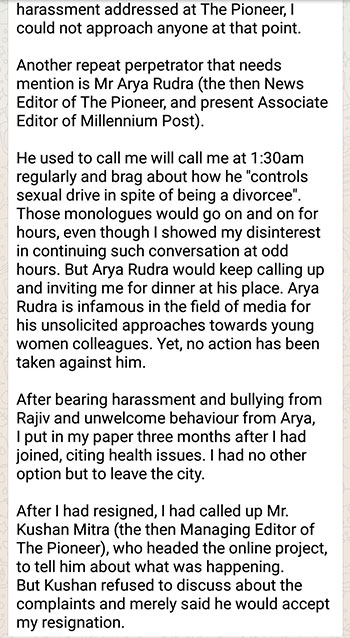 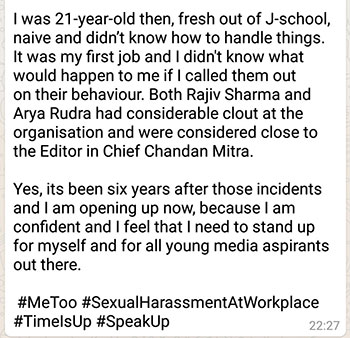 The woman complained to Kushan Mitra (the then Managing Editor of The Pioneer), who headed the online project, about the episodes of harassment after she had resigned. “But Kushan refused to discuss about the complaints and merely said he would accept my resignation.”

In the advertising world, one more ad agency founder has called out for sexual misconduct. A woman shared her harrowing experience of working under Kartik Iyer, founder of Happy mcgarrybowen. He allegedly joked about having sex with the girl, and mocked her when she complained about Tamil actor John Vijay misbehaving with her. Iyer even allegedly responded to a sexual harassment complaint from a woman with: “Please get that bxxxh to shut up. You know she sleeps with many people. Simply she is dragging our names into this.” Four women anonymously shared their experiences of sexual misconduct and sexual harassment at Happy mcgarrybowen on Twitter.

Four women at Happy (an ad firm in Bangalore) on email.

Iyer tweeted on Thursday morning that he categorically denies the allegations made against him.

To everyone out there. pic.twitter.com/3Cn0ovAqlo

In the advertising world, women working under men who are facing allegations of sexual misconduct are looking to quit their present jobs and work at safer agencies.

A Twitter user who first brought the allegations to light has put out a post on the social media platform seeking leads for openings in the advertising industry. “Several employees @Creativeland have spoken up about the founder sexually harassing them. They can't kick him out but they can leave. They require job opportunities in copywriting, art direction in #Mumbai for that. Pls RT & connect,” she wrote.

Agencies, content studios, and other media organisations responded to the tweet saying they have openings and that women looking for jobs can write in with their CVs. So far, Team Pumpkin, The Womb, Culture Machine, Bang In The Middle, SNG Comedy, and some others have offered to help the women.

Hi, we at @Team_Pumpkin are looking for multiple roles including copywriters, client servicing, PR and Video Editing. Happy to get some CVs and then take them forward. Please mail to swati@teampumpkin.com or rightclick@teampumpkin.com

Hi, I'm the Editor-in-Chief and assoc. creative director at Culture Machine, that handles Blush and Being Indian. We need scriptwriters/strategists and social media execs, please ask them to send their resumes to nikhita.kini@culturemachine.in

@skhndh i am part of The Womb Communications Team. Based out of Mumbai. We are happy to hire talented and brave people in our team.
My contact details : latika@thewomb.co.in.
Have a Nice Day.
Regards
Latika Thakur
Talent Partner
The Womb

Hi, we have openings in art/copy/ social media/ client servicing in Gurgaon and Mumbai (Bandra West). Do ask them to reach out to me on govind@banginthemiddle.com

Brands should focus on people & their health first
20 hours ago

Discounts by broadcasters, ease in lockdown bring AdEx on recovery track
20 hours ago

Not sure if market can support IPL 2020: Uday Shankar
20 hours ago