A special #MeinBhiPunjabPolice film has been created by Lowe Lintas in the honour of Harjeet Singh, Sub-Inspector from Patiala, whose hand was chopped off while trying to enforce the lockdown

At 10 am on Monday, April 27, the Director General of Punjab Police, Dinkar Gupta, IPS, put out a tweet saying for that entire day he would be changing his official name badge to ‘Harjeet Singh’ to honour the Sub-Inspector from Patiala whose hand was chopped off with a sword by Nihangs in an early morning episode as he stood on duty at a police naka and tried to halt their SUV.

Let’s show everyone that any attack on policemen & doctors, fighting COVID-19 on the frontlines,like SI Harjeet Singh, will unite India together as One.

In solidarity with SI Harjeet& all warriors, I urge you all to wear his name proudly on your chests today.#MainBhiHarjeetSingh pic.twitter.com/lar3AAhXrF

Harjeet’s hand was miraculously re-implanted by doctors at PGI, Chandigarh, in an operation that lasted 8 long hours. The Punjab Police, through this initiative was saluting not just the bravery of SI Harjeet Singh but was also saying thanks to the doctors and their team, for saving Harjeet’s hand, and his life.

80,000 policemen from Punjab changed their name badges to ‘Harjeet Singh’ and posted messages and pictures on Twitter, Facebook, Instagram and sent messages on WhatsApp. Families and friends of the policemen followed suit. Messages poured in from police forces of other states too like Gujarat, Kerala, Andhra Pradesh, Haryana, Mizoram, Tripura, Delhi, Chandigarh and Uttarakhand. More are expected.

“This has been the biggest single day digital activation in Punjab’s history,” says Carol Goyal, Executive Director of Mogaé Media who put together the entire initiative, with help from Lowe Lintas. A special #MeinBhiPunjabPolice film has been separately created by Lowe Lintas to commemorate the Harjeet dedication event and will be launched soon.

Earlier, on the weekend, Mogaé helped the Punjab Police take live a ‘remembrance wall’ in the memory of ACP Anil Kohli, the first officer in khaki to succumb to the coronavirus, in the service of the state, and the country. The wall, on www.inthelineofduty.in, co-created by Mogaé and ATechnos, has already attracted more than 25,000 messages from India and abroad. “There is a lot of lip-service but no real visible appreciation for the police for the self-less task they are doing, including getting themselves and their families infected in the discharge of their duties. We have worked with the Punjab Police to create the necessary messaging so that our heroes get their due in terms of our gratitude,” Goyal added.

#MainBhiHarjeetSingh was amongst the top trending on Twitter all day, peaking in the Top 10 nationally. Of course, in home territory Punjab, it ruled Twitter all day.

A large number of celebrities joined the digital #MainBhiHarjeetSingh initiative throughout the day. Gurdas Mann, Harbhajan Singh, Harmanpreet Kaur, Sunny Deol, Sidhu Moosewala, Honey Singh and Jaani were amongst many others who stood up to be counted for the Punjab Police.

“The police are our protectors, the doctors are our saviours,” said Goyal, “but somehow the necessary acknowledgement by society is not coming forth in an organized kind of manner”. “The salute to Harjeet Singh and the memory wall for ACP Kohli are concrete and visible efforts at both internal communication to the force that they are precious, but also provide forums for their families, friends and admirers to join the chorus in their praise.”

Mogaé Media has been working pro bono with the Punjab Police ever since the lockdown started. A song with Punjabi singer Sidhu Moosewala for Punjab Police titled ‘Gwacheya Gurbaksh’ crossed 4 million views last month. “We are creating new, highly patriotic and rousing songs with leading Punjabi singers and will be releasing them starting this week. We at Mogaé are very proud of the work we are doing for DGP Dinkar Gupta and the Punjab Police. Our efforts have been hugely supported by Wunderman Thompson, Lowe Lintas, NoFiltr, Rediffusion, The Mob and creative people like Harish Arora, all working pro bono,” Goyal added.

‘Where’d You Go, Bernadette’ to premiere on MN+
9 hours ago

Do not resume news ratings till we examine committee report: MIB tells BARC
19 hours ago

Pawan Jailkhani all set to start new journey
19 hours ago 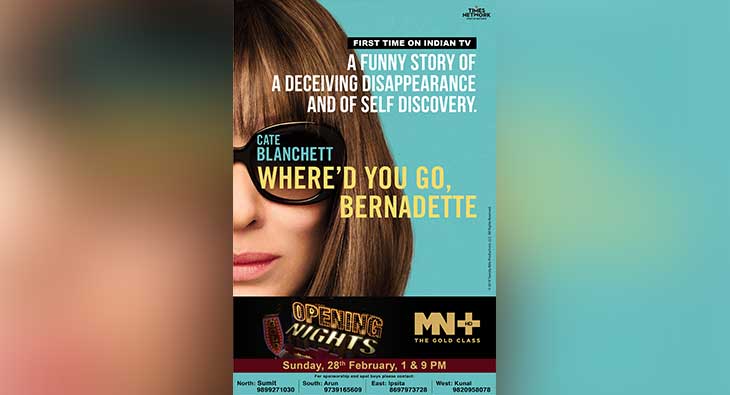 industry-briefing ‘Where’d You Go, Bernadette’ to premiere on MN+
9 hours ago