Netflix users in India might get to see ads during their binge-watching sprees. The streaming giant is testing video promos that play between episodes of shows.

Users reported on Reddit and Twitter that they were served ads in between episodes. The streaming giant clarified that the videos were not commercials but a test for "surfacing recommendations between episodes." As per media reports, the promos are full-screen videos that are personalised to the user and feature content that Netflix would have suggested elsewhere within the environment.

Users who subscribe to the service for interruption-free video streaming were upset about being served ads and took to social media platforms to report the same. One irate user tweeted: @ netflix I don't need ads in between episodes. Another said that ads defeat the purpose of a subscription-based platform like Netflix.

A Netflix spokesperson said that they conduct hundreds of tests a year, many of which are not adopted. 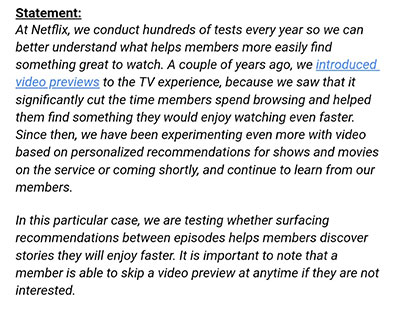 While Netflix may have set the record straight saying it is not serving commercial ads, this testing phase may be a precursor to the platform introducing an ad-supported version of the streaming service. Netflix lags behind competitors such as Hotstar and YouTube in the Indian market. In the Q2 earnings call, its Chief Product Officer Greg Peters confessed that Netflix is “way behind YouTube, Hotstar” in India.

The adoption of Netflix in India is low because of its premium price point. In July, Peters indicated that Netflix is constantly testing pricing models around the world. In India the basic Netflix subscription costs Rs 500 a month. Hotstar Premium’s monthly subscription cost is Rs 199, while the annual cost is Rs 999 and users can watch unlimited sports content for Rs 299.

Noting that there are three or four different sort of growth patterns within India in terms of different demographics, different segments and groups, CFO David Wells said that Netflix will address every segment. “Each one has a specific set of challenges with it and we’re in the early days of sort of that first segment. So yes, expect more from us in terms of getting into segments two, three and four,” he had said in the earnings call.

Peters said that Netflix is trying to find features that can be added to make the platform both “revenue positive and consumer friendly & consumer fair.”

@netflix I don’t like these ads you’ve started sliding in between my episodes of The Office! I’m well aware of what originals are on Netflix - don’t interrupt my binge watching to shove them down my throat!

@netflix Please don't start forcing me to look at ads in-between episodes. It's bad enough I'm forced to watch a clip of some original show every time I open Netflix. I don't want to watch Orange is the New Black or Insatiable or The Package.