From petitions urging the government to make self-defense a mandatory part of school and college curricula for female students, to empowering women to live the life they always want to, this year’s IWD campaigns are all for progress, parity and empowerment.

International Women’s Day, celebrated on March 8 is a worldwide celebration of the critical role that women play in the world. On the eve of the same, we’ve witnessed a plethora of fresh, female-focused creative campaigns, and celebrate the true essence of womanhood. From petitions urging the government to make self-defense a mandatory part of school and college curricula for female students to empowering women to live the life they always want to, this year’s IWD campaigns are all for progress, parity and empowerment. 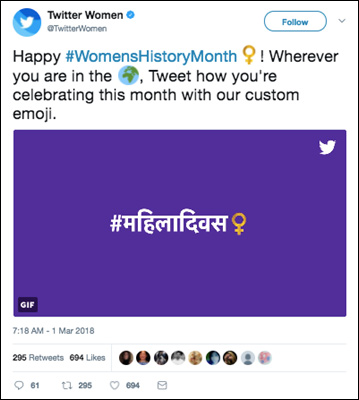 From #AintNoCinderella to #GirlsWhoDrinkBeer, a single tweet has the power to transform into a worldwide movement by helping women come together and find confidence in the community. This International Women’s Day, Twitter India rallies support for women's empowerment with a special emoji that launches with Hindi hashtags #महिलादिवस and #हमसेहैहिम्मत. Twitter users across the world can join the celebration and Tweet with the emoji using the hashtags #IWD2018, #InternationalWomensDay, #WomensDay, #SheInspiresMe, #PositionOfStrength, #IndianWomenInHistory, #महिलादिवस, #हमसेहैहिम्मत, and #नारीशक्ति. The new #PositionOfStrength initiative returns to Delhi on March 7, 2018 partnering with non-profit youth platform Youth Ki Awaaz (@YouthKiAwaaz). #PositionOfStrength is a movement to engage and empower women online while educating them on how to use Twitter as a platform to build a profile, have a voice, and create their own unique and influential personal brands. Twitter will also be live streaming the IWD 2018 #PositionOfStrength session from @YouthKiAwaaz from 5:00 pm IST, March 7 and questions can be submitted by Tweeting with the #PositionOfStrength hashtag.

The ethnic wear label has released their latest digital film #ChangeForProgress. As part of their ongoing campaign- #Change series, the film very wittily manages to tackle the age-old stereotypical notion of boys vs girls education and what is expected out of them! The film opens with a wedding setting, full of merriment and celebration. A group of young girls and a boy are sitting and chatting about their recently concluded exams. The conversation is interrupted by an uncle, who comes and asks the boy a seemingly absurd question. It is as absurd when asked to a woman, the film tells us in a beautiful, revelatory fashion. The new film #ChangeForProgress has been conceptualized by Brandmovers India, who have created all the “Change” series for the brand.

As a brand that has always celebrated women, Tanishq’s newest film continues that tradition. The film, conceptualized and developed by Lowe Lintas, tells the story of one such woman, who despite being a successful CEO decides to change direction in her life. The film inspires woman to be whatever they have always wanted to be.

The brand presents SheSpeaks – a performance art project that hopes to celebrate the voices of women. Bringing together artistes from different performance styles, #SheSpeaks will be a platform that celebrates women in a space they deserve: a space that respects them and a space that encourages every woman to #TrySomethingNew. The first in the series is Sayantika Majumder, performing her spoken word piece BAD GIRLS GONE GOOD: https://goo.gl/9R5cc5.
Two more spoken word artistes: Rohini Venkatesh Malur and Raphael Emileenaa, are a part of this series and their videos will be released on March 7 and 8, 2018 respectively.

Extending the brand thought of #BeatifulFood, Borosil began their journey to Women’s Day through the campaign #CelebrateBeautifulThoughts that showed the world how even the smallest gesture can take us a million steps forward. With this thought at the forefront of the campaign, Borosil has created a short, light- hearted film that reminds the audience that even the smallest effort made with the women in our families can snowball into a change we will see around the world. Conceptualized by Digital Marketing Agency, Social Kinnect, the video opens with a young boy ensuring the table is set to perfection. What happens next depicts how the mind of a child in the most playful form can teach us lessons we that could make us stop and rethink our actions.

Franklin Templeton Investments (India) flagged off a new story-telling video campaign around Women’s Day. The video titled ‘Invest for Progress' seeks to encourage women about the importance of being financially independent and how it can be a stepping stone towards achieving their goals in life.Women’s Day is the perfect opportunity to impart this key message. ‘Invest for Progress' tells a story of an ambitious and independent girl whose grandfather teaches her that in life, she shouldn’t just learn to earn, she should learn to invest. He does this in his own style.

In a world that has been male-dominated for centuries, gender bias and discrimination has seeped into our cultural fabric and rule our entire lives. Women’s Day is like a 24-hours carnival to make women feel at the top of the world. Social media gets flooded with dollops of praise for women and gender equality. But on the strike of the midnight hour, the world goes back to its normal ways of bias and discrimination. PC Chandra Jewellers decided to change this pseudo-narrative of equality. They went out and spoke to women across the city about bias and discrimination that they face in their day to day lives. They poured their heart out. Most of them spoke about the small, small instances of unconscious gender bias that have become a part of our daily lives. We collected the interviews in an appeal video with a clarion call to #UncelebrateWomensDay. 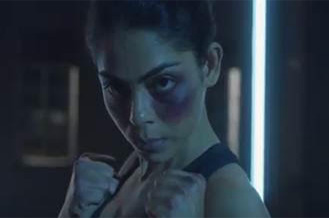 Reebok India has launched an engaging social experiment on International Women’s Day that makes a compelling statement on societal insights. The brand undertook a powerful experiment – Bruises can be good – that tapped into specific cultural and social conditioning to spark conversations to bring about a legislative change in the country. Conducted in Mumbai with select participants across both genders, spanning age groups, the experiment invited them to observe a young woman, marred with bruises. The audience reaction varied from “must be some horrid accident”, “victim of domestic abuse” to “terrible outcome of eve teasing”. In a sudden movement, the bruised girl in the film, stands up to perform a martial art move, surprising the audience and undoing their reactions to her bruised body. With a voice over, it is revealed that she is a combat athlete and that her bruises are “good” as they are a proof of her strength that enables her to defeat an opponent in combat. Highlighting that most of us perceive bruises and marks on women to be a result of violence, Reebok has made a petition on Change.org to make self-defense a mandatory part of school and college curricula for female students; Reebok wants to send this to Min. of Women and Child development, Govt. of India and is calling out to everyone to sign this petition. It has partnered with e-commerce portal Myntra to spread awareness about the cause and the petition that leads it. You can sign the petition at https://www.bruisescanbegood.com/

'To make online readers pay, we need to separate news from native commercial content'
3 hours ago

With ad volumes on TV soaring, broadcasters hopeful revenues too will follow soon
3 hours ago

Has COVID-19 led to endorsement fee cuts for the stars?
1 day ago

'When COVID-19 started, there was negativity but now the sentiments are positive'
1 day ago

Sakal Times & Gomantak Times to shut down operations
6 days ago