In the Hospital/Clinics sector, Radio topped with 42% share of category ad insertions followed by Print and TV at 33% and 25% respectively

The TAM AdEx report on Cross Media comparative data on the Hospital/Clinics sector has been released for the period Janyary to March 2019.

The release says that the ad volumes in the Print media have gone up by 3 per cent  compared to the same period last year.

The following are the other key highlights of the report:

An y-o-y analysis in the trend of ad volumes revealed that advertising on TV remained almost similar to the previous year, while it witnessed 2 per cent fall on Radio compared to last year. 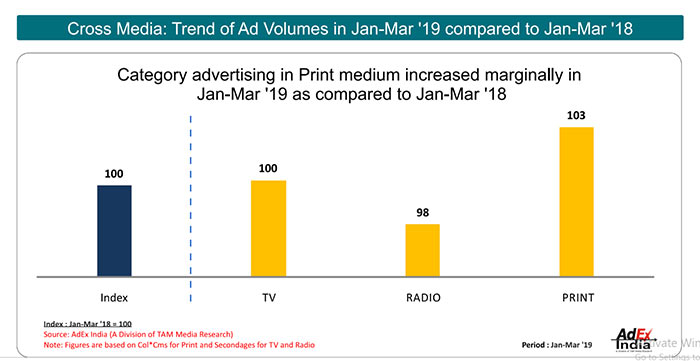 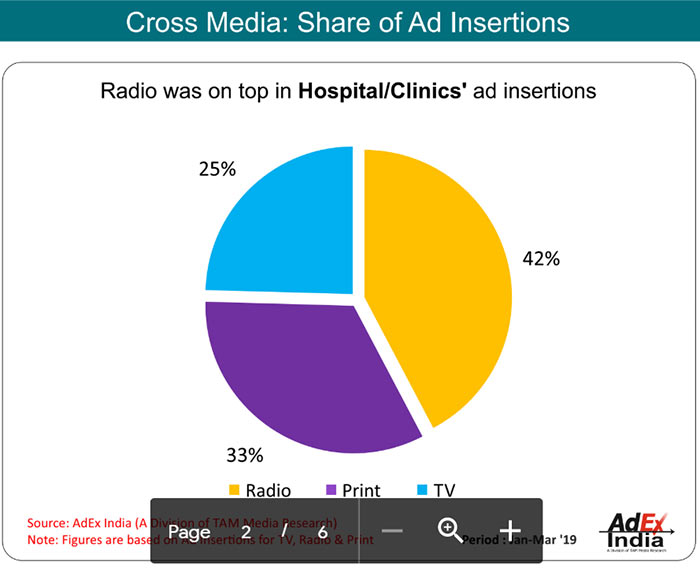 According to the report of the Top 10 Advertisers of Hospital/Clinics, Homeocare International was the common advertiser among TV, Print and Digital mediums and it also topped Print medium during January-March 2019 and Apollo Hospitals Enterprise topped Radio medium and was also present among the Top 10 of Print and Digital.

In the Top 5 Brands of Hospital/Clinics category, Namma Homeopathy, Homeocare International, Apollo Hospital and Invisalign.in were the top brands on TV, Print, Radio and Digital respectively. Of the top genres, News Bulletin topped with 35% share of Hospital/Clinics' ad volumes followed by Feature Films with11% share.

Return of channels to DD Free Dish will bring fair play in market: Experts
21 hours ago

e4m webinar: 'Brands will invest in advertising on sports, live or not'
22 hours ago

Return of channels to DD Free Dish will bring fair play in market: Experts
1 day ago

Will Google’s interest in Vodafone create the next big tech-telecom partnership in India?
5 days ago