In just seven months of 2018, pitches estimated to be around Rs 4,000 crore have been called. These include big brands such as Vivo, Samsung, GSK, Mondelez, Lenovo+ Motorola.

The year 2018 has turned out to be quite an eventful one for the media business in the country. Going by an estimate, seven months of 2018 have seen more pitches than the entire 2017. The total value of the accounts for which pitches have been called this year till now is around Rs 4,000 crore and includes big brands such as Vivo, Samsung, GSK, Mondelez and Lenovo+ Motorola. While most brands have announced their new agency partners, results for Samsung and GSK pitches are still awaited. The total value of the major accounts for which pitches were called in the entire 2017 was around Rs 3,000 crore. 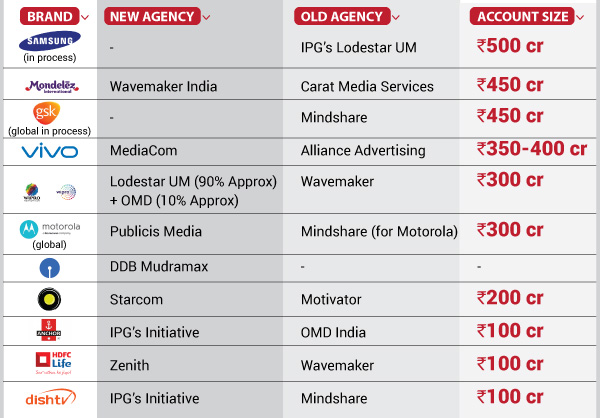 Experts believe that one of the reasons for so many crucial pitches being called back-to-back in 2018 is that the industry had a “struggling 2017”. For companies, a large part of 2017 went into grappling with the aftermaths of demonitisation and GST. With most marketers staying away from the ad industry, the adex growth in 2017 stagnated at 4-5 per cent. But 2018 was meant to be ‘a year of recovery'. Both, Pitch Madison adex report as well as Group M’s annual report, indicated a healthy growth of 12-13 per cent for 2018.

However, industry experts believe that there is more to this trend of frequent pitches than just 2018 being a year of recovery.

Sam Balsara, Chairman and Managing Director of Madison World, says it is an outcome of clients getting more ambitious and demanding. “Very often when they don’t succeed in meeting their objectives, they think the problem is because of the agency,” says a candid Balsara.

He further says that a major factor contributing to the increased number of pitches is that spends on advertising have gone up very sharply. “This is bringing ad spends into greater focus within the board room,” he adds.

Increasing role of consultants in driving business and running the pitches is another factor that has brought the relationship between clients and agencies under scanner. “Many management consultants have discovered a new revenue avenue here. They go to boards and say: we will save you money if you allow us to run the pitch,” says Balsara.

Ashish Bhasin, Chairman & CEO - South Asia, Dentsu Aegis Network, also believes that frequent pitches have become a new trend in the industry. “Clients pitching their business every two to three years has become a new norm in the industry. However, to me, longer relationships help and are better because people tend to look at long-term gains. Also, when agencies deal with clients over a period of time, they develop a long-term understanding of the brand,” says Bhasin.

Talking of the positive side of the trend, Bhasin admits that when roped in for longer durations, there is a possibility of both agencies and clients taking each other for granted. But from the business perspective, Bhasin says, the unhealthy aspect of this trend is that it is driving the pitches more and more from the procurement point of view.
“I think a client gets a lot more from a media agency than pricing. Unfortunately, what is happening in a pitch is that while the brief will contain a 100 things and everyone will talk about strategy etc, the final outcome mostly is based on pricing. This, to me, is not a good scenario as what is available cheapest may not be the most optimal for the brand,” he explains.

Balsara, meanwhile, was more upfront on his views on this. “Many of these pitches run almost exclusively on rates. Strategy and planning are just a sham. Therefore, you see that sometimes a new agency has a short life. It is because they have promised a lot, but do not deliver. And clients realise that they have made a mistake,” Balsara told exchange4media.

Anupriya Acharya, CEO, Publicis Media India, sort of differed and termed the reviews a standard practice. “Periodic business reviews have been the standard practice for many years now. Once every few years, clients try and find out what the market movement is and if there are any new areas or offerings that they may be missing out on. If done well, it can refresh even the existing client-agency relationship,” says Acharya.

She, however, admits that frequent reviews or reviews with not much thought to the outcome or process can be futile. “At an overall level, in India, I would say there are very few clients that do very frequent reviews,” mentions Acharya.

Adding a different perspective to the debate, Acharya says, “A more pertinent point is that the marketing landscape itself is shifting at a rapid pace, with huge technological and consumption changes to deal with. Personalisation at an individual level is generating data on a massive scale with an ever increasing need for relevance and engagement. Advertisers are therefore scouting for agencies that double up as business partners, as much as communications partners. These should be partners who have keen insights on the consumer and the category, and can help them surmount business challenges in a disruptive digital environment.”
“There is a far greater role that we play today as a strategic knowledge and services partner. At our agency, we take a consultative approach on businesses and are already preparing for what lies ahead by building up on areas of the future such as automation, artificial intelligence and machine learning,” she adds.

62% consumers want brands to continue to talk to them through COVID-19 crisis: Mark Read
19 hours ago

Amul has been able to keep it going despite the COVID-19 challenges: R S Sodhi
8 hours ago

BBC, CNN & Euronews donate free airtime worth up to $50M to public health bodies
13 hours ago

62% consumers want brands to continue to talk to them through COVID-19 crisis: Mark Read
19 hours ago

Advertising & marketing industry will come out stronger from this crisis: Ashish Bhasin
21 hours ago