Ambuja Cements: Master of the humble-brag

Ambuja Cements ranked no. 2 globally by the Carbon Disclosure Project, the company declared this with its brand of full-page financial results ads

Manufacturing cement is one of the most polluting processes as far as greenhouse gases go. So when Ambuja Cements was ranked 2 globally by the Carbon Disclosure Project, the company made sure everyone heard about it.

The humble-brag was hard to ignore. As the company is wont to do, it took to the papers with a full-page print ad announcing its Q1 2018 financial results.

Ambuja Cements took to newspapers to reiterate its pledge to “a carbon footprint-conscious growth”. The verdict about the company’s sustainability performance by the Carbon Disclosure Project (CDP) came just in time for its Q1 results. It is now ranked at No 2 in the world in business readiness for a low carbon economy transition. The copy on ad reads: Our Cement’s Final Output is Clear Blue; the results sit tabulated at the bottom of the page. 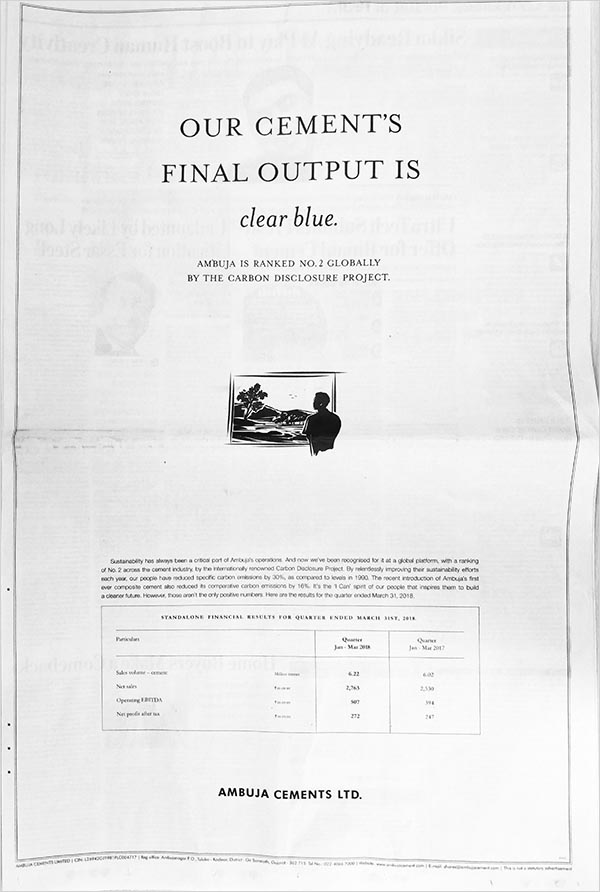 In a quarter when the company's profit grew 89 per cent YoY to Rs 338 the copy in bold black letters read at the top of the page: The World Has Recognised Our Lack of Contribution. That statement was followed by the fact that the Dow Jones Sustainability Index (DJSI) ranked the company 7 in the construction material category. It was also the only Indian manufacturer to be awarded such a high rank; the company did not make a huge fuss about this though. The humble-brag has its limits. 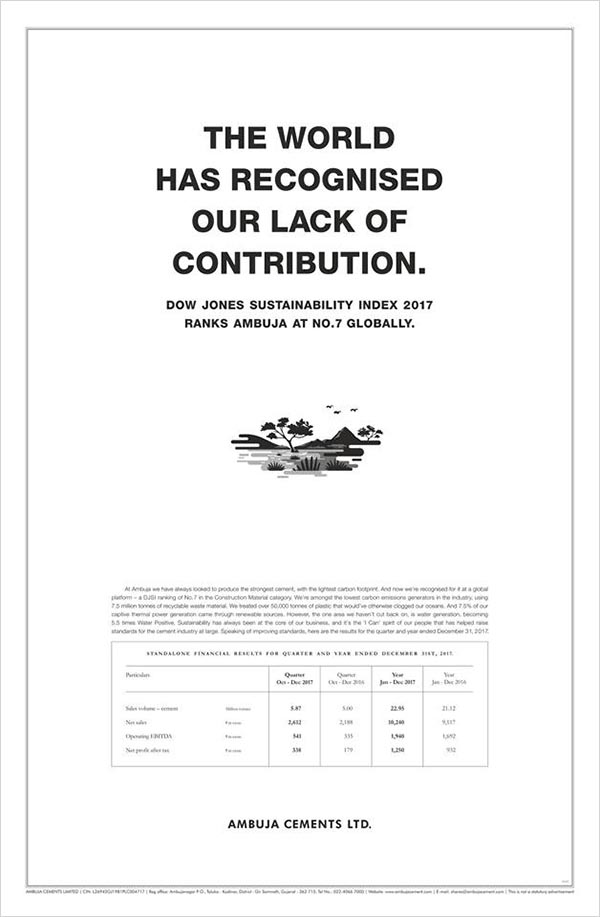 “As a leader in the cement industry, the company uses tongue-in-cheek witty lines to drive home a message. The brand is setting an example in the industry using very strong communication about the work it is doing,” said N Chandramouli, CEO TRA.

Commenting on the legendary ads, Prathap Suthan, Managing Partner and Chief Creative Officer, Bang In The Middle, said, “These ads are not intended to sell anything; they make a statement meant to be seen by people at the top like CEOs and investors.”

Both the rankings were published just around the time of the quarter results announcement; Ambuja Cements seized the opportunity to run an ad. “The company turns the drab financial results ad into those that state the brand’s purpose and demonstrate sustained success,” Chandramouli said.

The ads for Ambuja Cements (Corporate) are conceptualised by Alok Nanda and Company. The company is in the habit of creating ads for its quarterly financial results always harking back to the brand purpose of Ambuja Cements - I Can.

Ambuja Cements takes to the papers with its purpose-driven advertising highlighting its role in the story of India and topical matters. In July 2017, the topic was Monsoons. The company has been certified to be five times water positive, giving back five times the water it uses. 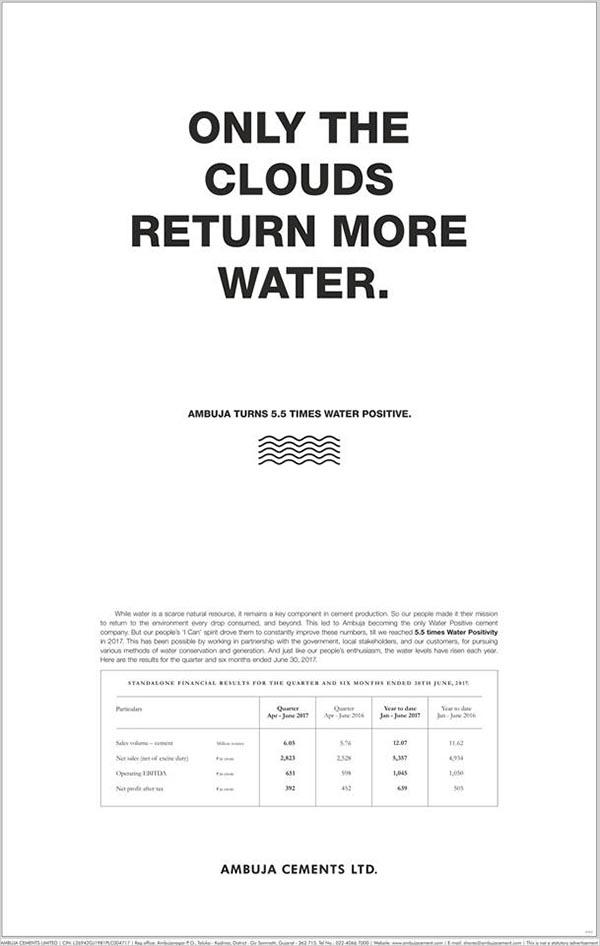 In February 2017, it was demonetisation. 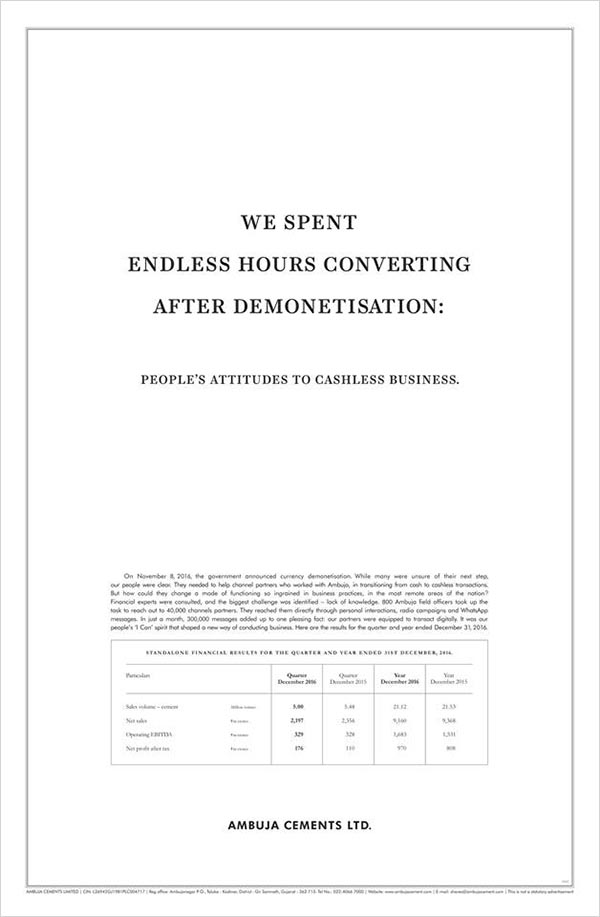 In November 2017, it was the Special Olympics 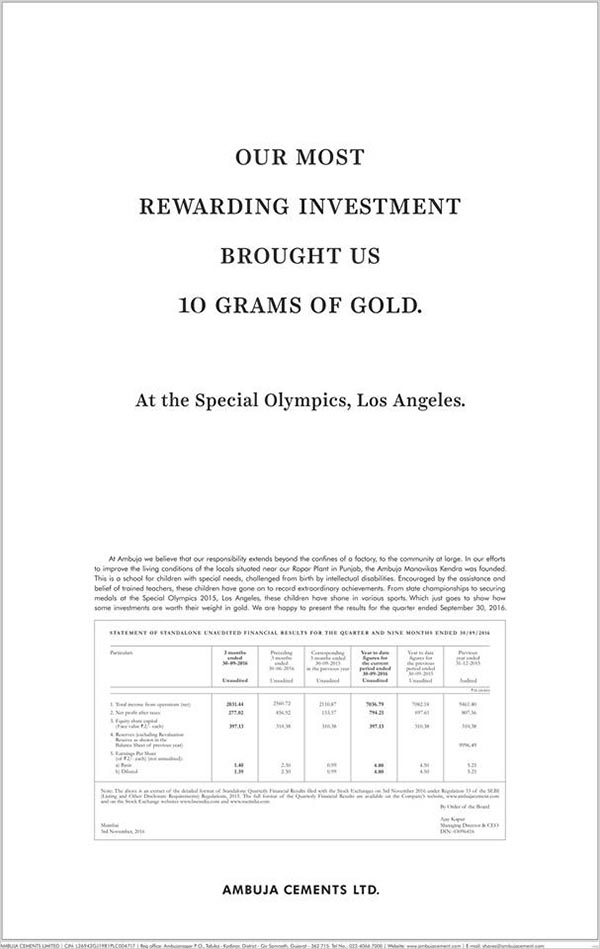 What could it be next quarter? Have any guesses?