News networks usually revise their ad rates every year in Feb-March for the next financial year. But this year, the rates may be evaluated again in July and September. 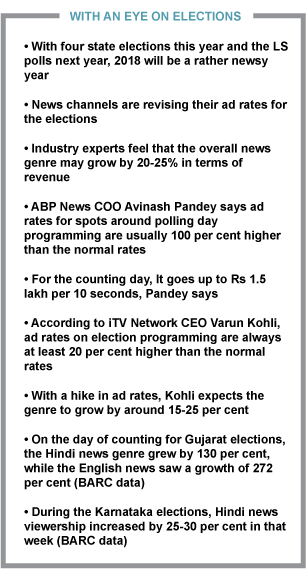 The year 2018 is going to be rather news-heavy with four states going to poll this year and the big Lok Sabha elections coming up next year.With an eye on the polls, news channels are all set to revise their ad rates early this year. Networks usually revise their ad rates every year in Feb-March for the next financial year. But this year, the rates may be evaluated again in July and September, say industry insiders.

With this revision in the rates, it is expected that the overall news genre may grow by 20-25% in terms of revenue and contribute more to the total TV viewership.
Avinash Pandey, COO, ABP News, explained, “During elections, there will be two kinds of rate for commercial clients—one for the polling day and another for general days. The ad rates for spots around polling day programming are usually around 100 per cent higher than the normal rates. However, for the counting day, the rates will be based on demand and supply. It goes up to Rs 1.5 lakh per 10 seconds.”

Varun Kohli, iTV Network CEO, mentioned that there is always premium ad rates on election programming and these rates are at least 20 per cent higher than the normal rates.

Kohli expects the genre to grow by around 15-25 per cent on account of the crucial state elections ahead of the 2019 Lok Sabha elections.

The news genre contributes 8 per cent to the total TV viewership. It was the third biggest genre on television in terms of viewership in 2017, as per the Broadcast Audience Research Council (BARC) India data.

In 2017, the Gujarat assembly elections saw a huge interest from viewers. On the day of the counting, the Hindi news genre grew by 130 per cent, while the English news saw a growth of 272 per cent (as per the BARC data). This clearly shows the interest of viewers in news, especially during elections. During the recently held Karnataka elections, Hindi news viewership increased by 25-30 per cent in that week (as per BARC data) despite the regional nature of the news. And so, expecting a similar surge in viewership during the upcoming elections won’t be wrong.

According to Pandey, ABP has started programming around elections since the beginning of the year with properties such as ‘Kaun Banega Mukhyamantri’.

“As a news network, we are much ahead in the game in election coverage. Interest of the common people goes very high during elections. Though it's too early to talk about the kind of programming that we will have on our network, we are planning to do different things, including use of AI, for our election programming,” he said.

“We have already covered the entire UP and most of Delhi in round coverage, collecting the mood of the nation-- what people think about the current government and policies. You will see most of the to-the-point programming from July," added Pandey.

Pandey also predicts that the growth in the news space will easily be between 15 and 20 per cent. “If a channel does well in terms of performance, the figure can go up to even 25 per cent,” he said.

Republic TV CEO Vikas Khanchandani said that it's premature to talk about special programming around elections but there will be lot of new shows from Republic.

“We make sure that we constantly get something different from the viewers and consumers perspective. So that their experience with our channel is far better than what anybody else is giving.”

Sharing his thoughts on the election year and the expected growth of the news genre, a senior media planner said, “It is the election year and so there will be far more news, but that doesn't automatically mean there will be greater viewership. If viewership goes up, it should be substantial enough to be able to fetch higher revenue from advertisers. It will not happen just because you are delivering more numbers but there has to be stickiness also.”

“We should hope for 2019 to deliver higher revenue growth to the news genre. The growth can be expected between 25 and 30 per cent and can go also go up to 35 per cent,” the planner added.

Vynsley Fernandes, Executive Director, Castle Media, thinks that the revenue during election year can increase easily between 25 and 40 per cent. The news channels work on the factor called ‘Yield’, he explained.

“During elections, new ad rates are created. And they can be 20-30 per cent higher than the standard rates. It's also important to see the kind of properties created around the election time. Advertisers often look at the properties-- say an exit poll being hosted by a well-known journalist commands higher tariff as compared to a standard election exit poll with just reportage,” he concluded.

Elections will be held in Madhya Pradesh, Chhattisgarh, Mizoram and Rajasthan in late 2018 and general elections are due in April or May 2019 to constitute the 17th Lok Sabha.

media-tv Will broadcasters' gamble to keep GEC, sports out of bouquet pay off?
13 hours ago