The acute lack of ATMs in semi-urban and rural India has led to the RBI incentivising White Label ATMs by allowing them to earn revenue from advertising. Here is how they are doing it

White Label ATMs (WLAs) or private non-bank ATM setups which are permitted by the Reserve Bank of India (RBI) to display third-party advertising are the latest advertising solution for brands looking to target audiences in the media-dark regions of the country.

The primary revenue model of companies such as Indicash, a leading White Label ATM player, is the interchange fee from issuer banks. The secondary revenue model of bank co-branding allows banks to brand a WLA as their own for a set period of time. Because of the incentive given to these providers by the RBI, advertising for non-banking entities is emerging as a successful revenue model.

Indicash, one such leading White Label ATM player in the country with close to 8,000 WLAs across 5,000 towns and villages, has devised multiple advertising solutions for brands. “As the second largest ATM network in semi-urban and rural areas, Indicash is behind only the State Bank of India as far as coverage in these areas goes,” says Sanjeev Patel, CEO, Tata Communications Payment Solutions Ltd (TCSPL). TCSPL runs the Indicash White Label ATMs.

Opportunity for WLAs as advertising solutions

It is because banks were not deploying ATMs in rural areas, that the RBI incentivised WLAs by allowing them to create a supplementary revenue stream through advertising. Typically, banking institutions prefer to set up ATMs in prominent locations on high streets to not just serve consumers but also to create visibility for themselves. “Setting up ATMs is in fact a logistics concern for banks. They used to outsource it to companies like ours. But they have realised that it does not make a difference where the customer goes, unless it is specific catchments where they want to have a presence or in a place where they wish to acquire customers,” Patel explains. 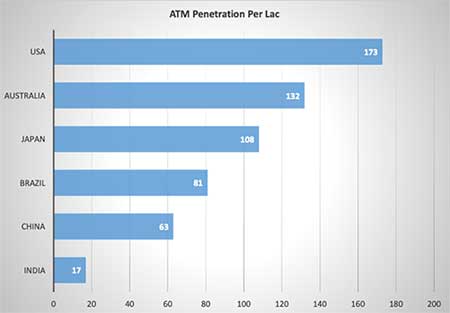 Since digital transactions, Point of Sale transactions and m-wallet transactions shot through the roof immediately after demonetisation in November 2016 owing to low availability of cash, banks have turned their efforts away from installing more ATMs and have been developing their own mobile wallet solutions etc. Data from the RBI shows that the number of ATMs in India has fallen by 5,088 from 2,08,354 in March 2017 to 2,03,266 as of December 2018.

This provides an opportunity to WLAs as ATM transaction volumes are back to pre-demonetisation levels, as per a study by TCSPL. “This is an advantage for us. Because the under penetration, especially in rural areas, means that a lot of consumers would be coming to our ATMs,” says Patel. He reasons that because India is still a cash economy, people would be headed to the WLA ATMs because no other banks are deploying ATMs in these semi-urban and rural areas. 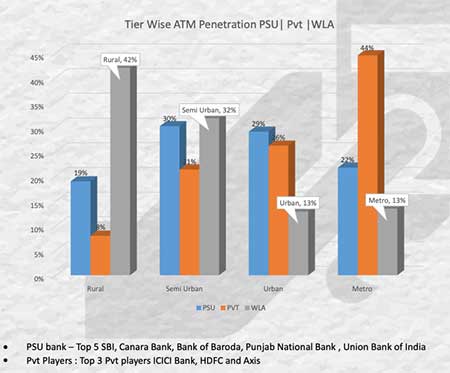 Reaching the media dark regions of India, Indicash has 66 per cent of its ATMs located in rural India and 34 per cent in urban areas. In contrast, bank ATMs have a 54 per cent urban presence and 46 per cent rural presence.

“ATM AdNext, our advertising solution, offers a combination of offline and online media by which we provide targeted advertising with specific focus on customer segments in media dark areas. This includes Outdoor - ATM Room branding and targeted digital branding through the ATM screen,” elaborates Patel. He says that the ATM is a great place to grab a customer’s attention because during the time that the customer is in the room, the brand has his undivided attention for at least 45 seconds. 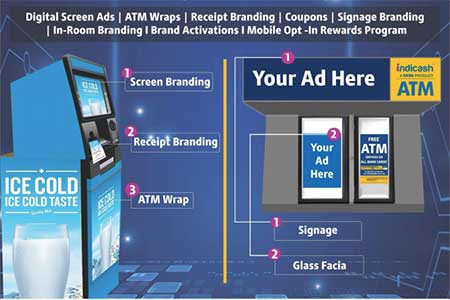 The Outdoor option gives brands the ability to take over the entire ATM room and the outside of the ATM including the door and store signboard. “In rural areas, Outdoor options are limited to wall paintings or shutter paintings. This solution offers brands a whole room and outdoor signage typically in the center of the town or village attracting customers with purchasing power - because they have debit cards, know how to use it, and have money in the bank,” explains Patel.

He further clarifies that the on-screen advertising is customised to the customer using the ATM. “We have software whereby based on the card that the customer dips into the ATM, we understand who is using the ATM.” Indicash has connected all its ATMs across cities, uniformising the entire portfolio by deploying the same software in all its machines.

These ATMs have a campaign management technology by which a customer using the ATM for the first time is assigned a customer ID, making it easy to track the same customer the next time he/she walks in.

Through the on-screen interaction with the customer, Indicash collects data about the customer, including their phone number if they wish to share it. If the customer shares her number then Indicash is also able to send a customised brand message to that number which could be a discount coupon code or any other information a brand would like to share with the customer.

Multiple banks, including the Paytm payments bank, have used the plug and play ATM co-branding solution that Indicash offers. DBS launched its digibank solution with Indicash. As compared to typical ATM deployment solutions offered by Brown Label ATMs, WLAs allow banks to pick up any number of ATMs and pay a rental per month or per year without any upfront payment. This is a relief for banks that are forced to take up long-term deals with Brown Label ATMs where the investment could be as much as Rs 3-5 lakh per ATM room.

“Working with Indicash, a bank can choose to have its ATMs in one pincode for a few months and then shift to a whole different city for the next few months. This model is a win-win for banks that are looking at instant brand presence because all they need to do is co-brand with us,” says Patel.

New banks that want to announce their brand to customers without the hassle of investing in deploying ATMs could use this solution to go to market in the least amount of time possible. “Paytm’s payments bank, which was battling the perception of whether it was a bank, made an impression by taking over 1000 ATMs across the nation in collaboration with Indicash,” explains Patel. 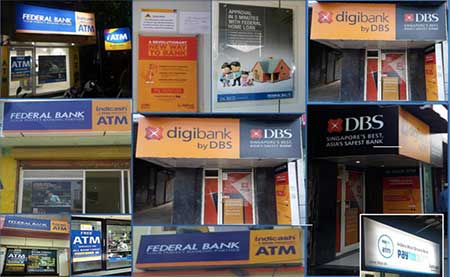 Numerous leading brands such as Flipkart, Makemytrip, Swiggy, Nokia, TVS Motors, Kidzee and Wagh Bakri Tea have worked with Indicash on various kinds of campaigns over the last year.

Aparna Narayanan, Business Director, Madison World, who collaborated with Indicash for the launch of TVS XL brand, says that the brand used the ATM door branding solution which basically worked like an OOH solution leading to a lot of buzz around the product in the region.

Monal Ramvhia, Senior Marketing Manager, Kidzee, said he used the Indicash ATMs to target his core TG of parents and investors who may want to initiate a Kidzee franchisee. “We chose to target parents by going after core catchment areas where other media could not penetrate. We used Indicash as a lead generation medium for both parents and investors,” he says.

Even though Indicash delivers on screen solutions and branding options inside the room, both Narayanan and Ramvhia said that they see better promise with the Outdoor element which captures the attention of the consumer even if he/she does not enter the ATM.

Nonetheless, Patel and his team is counting on "plugged-in’, customer-centric brands that are seeking to multiply their brand reach and engagement rapidly adopting this cutting-edge solution which is already mainstream in developed economies."

We have Rs 126 crore in ad revenues in June: SL Narayanan, Sun Group
9 minutes ago

What Twitter's loss of intermediary status means for brands, users & the platform
50 minutes ago 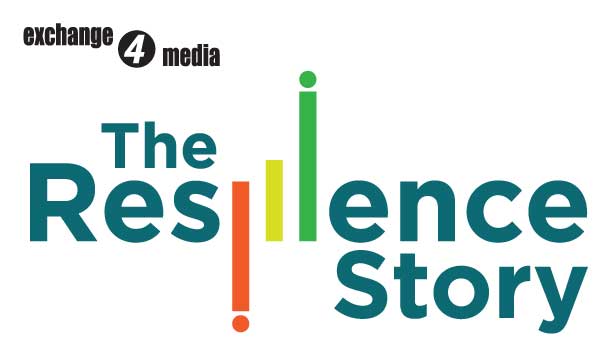 marketing Palak Kohli roped in as Myprotein Athlete
20 hours ago