Inaugurating the academic session 2021-22 of the Indian Institute of Mass Communication (IIMC) through online medium on Monday, Speaker of Lok Sabha, Shri Om Birla advised the students of journalism and mass communication to create news based on facts and spread positive and constructive messages around the world with their reporting. He said that India is the mother of Democracy and free and unbiased media empowers Democracy. On this occasion, the Director-General of IIMC, Prof. Sanjay Dwivedi, Additional Director General Shri Ashish Goyal, Convener of the Orientation Program and Dean (Academic) Prof. Govind Singh, faculty members and students of all the regional centers of IIMC were present.

Shri Birla said that there is Democracy in our civilization, culture and ideas. India's Democracy is the richest in the world. With the help of the Constitution, Indian Democracy has set a journey of development and prosperity. He said that today the whole country is celebrating the Diamond Jubilee of Independence. Massive progress is being made in the social and economic field. The world is aware of our hard work, innovation, determination and collective strength. The journey of 75 years after Independence, like the history of the freedom movement, is a reflection of the hard work, innovation and entrepreneurship of Indians.

According to the Speaker of the Lok Sabha, the media has a big role in awakening the social consciousness. Media fixes the accountability of the government and political parties and facilitates bilateral dialogue between governance and administration and the people. Today the scope of journalism is increasing. The reach of the media to the people has increased, but with this, the responsibility of journalists has also increased. It is the responsibility of a journalist to be fearless and outspoken.

Shri Birla said that the role of media has become more important in this era of Corona Pandemic. We have also been successful in saving lives of people through social media, but we have to understand the difference between media and social media, he said. He also said that social media needs to be made accountable. On this occasion, the Speaker of Lok Sabha invited all the students of IIMC to watch the proceedings of the Parliament.

Guiding the new students, the Director General of IIMC, Prof. Sanjay Dwivedi said that the influence of media in India has increased rapidly in the last two decades. Constant use of  media has also increased. Keeping up with the rapidly growing economy, media today has turned into a big industry.

Prof. Dwivedi told the students that the doors of new possibilities are waiting for them in the country but it is up to them to decide whether they want to be part of the problem or the solution. "If your intention is clear and you have devotion towards your duty, then every decision of yours will lead you towards the solution of any problem," he said. According to Prof. Dwivedi, our present and future are not determined by success and failure. As long as the youth of India have the spirit to innovate, take risks and move forward, there is no need to worry about the future of the country.

Media has given a new identity to folk culture: Malini Awasthi

In the second session of the program, eminent folk singer Malini Awasthi while speaking on the topic 'Lok Sanskriti and Media' said that the media has an important role in the preservation and promotion of folk culture, because newspapers have made significant efforts to save folk culture. She said that the folk culture, folk songs, folk tales which are prevalent in front of us today are the result of the tireless efforts of our ancestors. Our ancestors have preserved them somewhere through traditions, and somewhere in the form of folk songs.

In the last session of the Orientation Program, renowned film actor Ananth Mahadevan on the topic 'Changing Paradigm of TV and cinema in India' and Nagma Sahar, journalist of NDTV on the topic 'The future of TV news' also addressed the students.

HT Media forays into SAAS space with Upublish
9 hours ago

Sanjiv Puri is the IMPACT Person of the Year, 2020
35 minutes ago 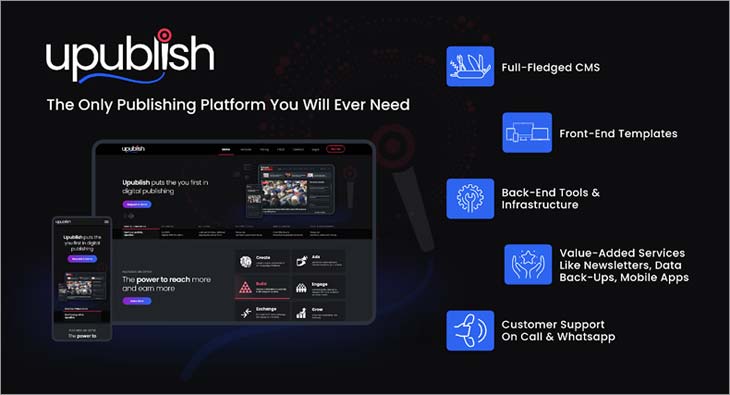