There is enough space for new stories: CEO, Hungama Digital

Neeraj Roy speaks to exchange4media about the original shows that Hungama released this week, their marketing strategy and more

Titled Damaged, Hankaar, Bar Code and Boys with Toys, the shows span across different genres such as crime, drama and humour and feature a diverse cast and crew from the film, TV and theatre world. Hungama will launch the four shows over the next three months, with the first one, Damaged, premiering on June 6. While these four shows would be in Hindi, Hungama plans to create original content in other major Indian languages as well. 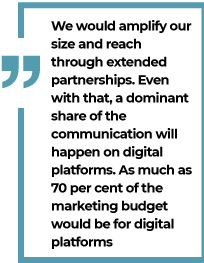 When asked what took Hungama so long to come out with the originals, Neeraj Roy, Managing Director and CEO, Hungama Digital Media, said, “We wanted to have a portfolio of series ready before we come out. We hope to launch 10-12 shows in this fiscal year. We are certain that through the long-form content, we’ll be able to significantly increase our user base. Each of the series has a minimum of 10 episodes and maximum of 22, roughly between 22 and 25 minutes each.

Roy is not worried about the increasing competition as he feels that there is enough space for storytelling.

“We understand that there is a need gap when it comes to television programming and films. There is enough space for new stories to be brought about. There is so much space for storytelling,” said Roy.

Hungama is also looking to enter the regional market, providing content for a large audience across different age groups, genders and geographies.

When it comes to the marketing plan, the MD said that they would target digital platforms in a big way.

“We would amplify our size and reach through extended partnerships. Even with that, a dominant share of the communication will happen on digital platforms. As much as 70 per cent of the marketing budget would be for digital platforms,” Roy mentioned.

He added that the promotion will also be genre-specific. For instance, for an upcoming show, they are looking at radio-based promotion.

Roy is confident that the company’s strong distribution network would help the shows reach a combined audience of over 50 million, the viewer base that the platform has garnered in India over the last 9-10 years. Plans are also underway to take the content to a global audience with the help of existing and new partners.

Meanwhile, Hungama’s association with Xiaomi will enable viewers to watch the shows via Hungama Play on Mi Video and Mi TV. In addition to this, users will be able to stream the shows through Hungama Play on Vodafone Play, Idea Movies & TV, Amazon Fire TV Stick and other Android TVs.

“The key is that we are not giving the shows for anybody to run. It will run on Hungama Play Service wherever integration exists,” said Roy, adding that they are also looking at further partnerships with mobile handset companies and telecom providers.

IT raid on Dainik Bhaskar attempt to suppress voice of media, say political leaders
23 hours ago

Bewakoof.com will soon get on television for marketing: Prabhkiran Singh
1 day ago