Performance based advertisers to benefit from Snapchat in India: CRO, Tyroo

Akshay Mathur of Tyroo says brands catering to e-commerce, gaming and OTT are the primary verticals to benefit directly from their partnership with Snapchat

Snapchat has been successful in establishing itself as one of the most used apps among millennials thanks to its novelty factor. With this kind of penetration, Snapchat certainly has built a certain degree of brand advocacy within this demographic segment.

But somehow, until now Snapchat had not prioritised to map revenue from the Indian market like other tech giants namely Facebook, Twitter and Google. It was only recently that the ephemeral messaging app struck a partnership with Tyroo to help it monetise the Indian market.

The chase to show growth in revenue and increase in user number has probably led to this new association with Tyroo, which will now have a significant impact on the brand value of Snapchat in India. With a strategic partnership of this kind, the ad-tech firm, Tyroo, owned by Smile Group, will now help Snapchat engage with more advertisers in India. 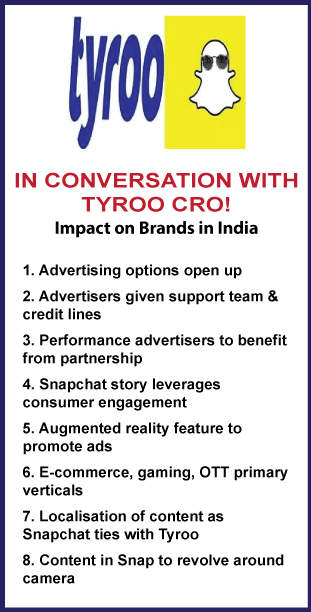 Commenting on how Snapchat’s augmented reality driven lens product, its filters and its story platform would benefit potential brands in India, Tyroo’s Chief Revenue Officer, Akshay Mathur said, “Through this partnership there are a lot of advertising options which suddenly open up now that didn’t exist earlier. Previously advertisers had to adhere to a self-service platform based on limited credit if they wanted to engage with Snapchat, but now with our partnership we are getting advertisers on board, they are being provided with credit lines and a support team. A lot more can be done at scale. Snapchat will be working for both brand led and performance advertisers. Snapchat’s augmented reality feature can help brands leverage their advertising. Snap ads are being used pro-actively by e-commerce brands such as Amazon, Swiggy and a few others with an end goal of performance subscription, app install or purchase. This platform works very well for performance advertisers to draw revenue. Brands catering to e-commerce, gaming and OTT are the primary verticals that shall benefit directly from this partnership.”

Story ads have become an integral part of our lives these days. Be it Instagram or Snapchat, we all want to share our lives best moments with our followers. Today the medium of pictures and videos are being used to engage with people, camera is the key tool used to communicate these days. Sharing his opinion on the subject, Mathur said, “The story feature is a very effective medium for brands focusing on performance-based advertising. These story videos leverage the engagement factor once you ‘swipe up’, which is an option that opens doors many other direct response features and sharing options. Snapchat defines itself as a camera marketing company and not a social networking site. They are starting with the concept of camera advertising where products, advertising suits, the discover section, and the content flowing in on Snapchat all revolve around the camera. What we believe is that the future of communication is more visual and not text.”

Snapchat took its own sweet time to expand its operations here. “Snapchat as a company was waiting for a certain threshold level of adoption by the Indian audience and if we speak about any app that enters a new market, it does so only after a certain threshold of audience is reached. Currently, the firm has a 4.5 million Dual Action use in India,” added Mathur.

Speaking of initial plans, Mathur said, “Currently we have met around 150-200 large advertisers within the first month of this partnership i.e post our formal operationalisation in June 2018.We plan to host a couple of events for brands like engaging with the top 100 advertisers in India and get as many advertisers on board with us by pitching them about the app and its features they could put to use. We are still approaching brand led clients, e-commerce and online-digital clients for further awareness.”

When asked about any talks on a ‘Snapchat for India’ just like Uber, Amazon for India etc, Mathur said, “This partnership will give way to a lot of localization that will take place when it comes to content. Going forward there are no specific plans that we are aware of but a change in content for the Indian users is certain. During IPL, Snapchat promoted show relevant content on the app to engage with its users and, of course, cricket, being a global passion, is followed by several users.”

Commenting on Tyroo’s business model, Mathur said that it has been successful in positioning itself as an entry level partner for quite a few ad-tech companies. “Our build-operate-partner model has helped us to scale up our interactions and engagement with many other brands. With our expertise we leverage their business and understand that these relationships are obviously critical and time bound. We have been associated with Twitter for almost five years now and it feels good to have a pat on the back when their sales team pitches for us," said Mathur.

Instagram to bring video ads to IGTV
22 hours ago

We got 100X value back with our investments in Ramayan & Mahabharat: R S Sodhi, Amul
16 minutes ago

e-Content Jam: Why influencers have beccome crucial for brands in lockdown
27 minutes ago

Will Facebook ‘Shops’ give smaller stores a new dimension?
1 day ago

e4m e-Content Jam today: Experts to speak on Content Marketing during the pandemic
3 days ago