Kerala as a state has a deep-rooted cultural diversity which is a unification of different religions, communities, festivals, literature, cuisines, music, native art forms etc. Malayalis (Malayalam-speaking people chiefly inhabiting the Indian state of Kerala) are famous for a number of things, major ones being their never-ending love for traditional Kerala cuisines, literature, movies, music, and of course for their sarcasm and wits.

Sarcasm and humour in popular culture

Sarcasm and humour are entwined with the culture of Kerala, art forms such as Chakyar Koothu- an art form in which stories of Hindu mythologies and epics are rendered orally with the support of acting and hand gestures, Ottam Thullal- a dance and poetic performance are examples to substantiate the fact. The origin of Ottam Thullal is traced back to the 18th century while that of Chakayar Koothu is still unknown. 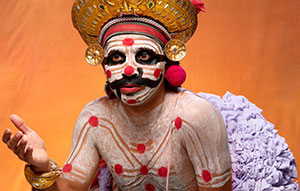 The highlight of these art forms is satire, social criticism, humour, and sarcasm. These arts forms were used as a tool to criticize the rulers and kings of those times and to spread social messages. When main-stream cinemas and television channels started gaining popularity the satire and sarcastic elements shifted its focus to movies and TV channels. Several movies were released in the late 80s and early 90s which mocked the political and social conditions of the state. Panchavadi Palam, Sandhesham, Varavelpu, Vellanakalude Naadu are some of them. 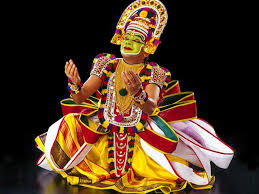 Television channels also started broadcasting satires, Cinemala which was telecast in Asianet delved into contemporary political and social issues. Munshi is another political and satire television program which takes up social or political topics which is a part of current affairs. It is telecast on Asianet News. Sakshi of Kairali TV, Nadakame Ulakam of Amrita TV, Thiruva Ethirva of Manorama News are few other satires from Malayalam channels.

The Meme pages of Kerala

The social media pages like ICU (International Chalu Union), Troll Republic, Troll Malayalam are taking sarcasm to another level. These pages post sarcastic memes on contemporary socio-political issues and are almost on par or have overtaken the traditional forms of satires like cartoons and TV shows. These pages come up with memes (depicting an incident or about a public figure) which are of sarcastic nature within minutes the news breaks. Apart from providing humorous content, these pages act as a source of information of currents affairs to some set of people. 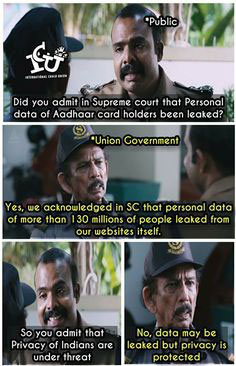 The people who posts memes in the meme pages in Kerala are called Trollans (a word derived from the word Troll). Though the word troll has a negative connotation, Trollan refers to someone who mocks and posts sarcastic jokes on someone or an issue. From statements by religious leaders to natural calamities, everything is a topic to create memes for the Trollans in Kerala. The memes not only provide a good laugh but also helps readers get clarity on a particular issue. Most of the memes use screenshots from popular Malayalam movies. All of these pages have a huge number of followers and the pages have a group of admins, moderators, and editors to filter the content provided by the members.

The history of ICU goes back to the days of social networking site, Orkut, it was started as a college group and later migrated into a Facebook page. Initially, the page was a closed group with forwarding jokes and sports and movie related contents. Later, political contents were also added to the page. With the course of time page started getting noticed and the page was formalized with rules and regulations. According to the rules of the ICU page, posts which have defamatory, indecent, obscene, gender stereotype, sexist contents are not allowed. 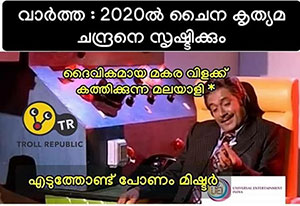 “Memes allow us to empathise with other and it is the medium for the rapid spread of ideas. Nowadays most of the students are updated with the help of memes. Not only it gives them a good laugh, but they also get to know what’s happening around,” said Anand Shan, founder of Dank Memes Malayalam page. 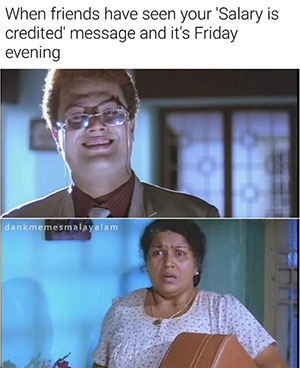 A meme from Dank Memes Malayalam

Apart from providing entertainment through their memes and posts, these pages stand for social causes as well. When a Malayalam actress was attacked and the film fraternity in Kerala was not taking a proper stand on the issue, these meme pages declared their solidarity through their posts and changed their cover pictures with hashtag #avalkoppam.

When the 2018 floods hit the state, these pages stopped posting memes and jokes and used the page to circulate information among the public. They used their reach to pass information about people stranded due to rain and the requirements in the relief camps.  When the situation was in control, they started posting content which educated people on how to handle post-flood situations.

When a private college student named Jishnu committed suicide due to alleged harassment from the college authorities, these troll pages declared their solidarity and concern to his family. The protest through their posts has created ripples in the cyber world. When a youth named Sreejith was fighting for a CBI (Central Bureau of Investigation) inquiry on his brother’s by sitting on the pavement near Kerala Secretariat, a video posted on social media has united the people all over the state to stage a protest for the cause.

At that instant also the members of meme pages united to fight for the cause, hashtag- #justiceforsreejith were trending as posts and memes and finally CBI agreed to take over the case. (Sreejith has not ended his protest as the investigation process has not begun).

Politics and politicians are sensitive topics, but that doesn’t stop these meme pages on posting about them. The Trollans are also good at coining new terms and names for public figures.

When the Cochin metro was inaugurated, the presence of a politician named Kummanam Rajasekharan (currently the Governor of Mizoram) raised eyebrows as he was not holding any position and was seen among the dignitaries. Memes started flowing and the word Kummanadi was coined which means ‘the act of travelling without taking tickets’ and later the definition has widened to something like attending events uninvited.

When another politician named Sridharan Pillai from Kerala kept changing his opinions on the Sabarimala issue, the term-‘ Pillayadi’ - a person who keeps changing his opinions frequently, was derived. Funny memes and posts on a political party or a public figure invite threats and abusive comments from followers of the party or the person. ICU’s page was taken down by Facebook sometime back because of a meme on Jesus Christ. These pages conduct meme competitions among the members. At times they use this medium to simplify some complicated scientific terms to educate the common people. 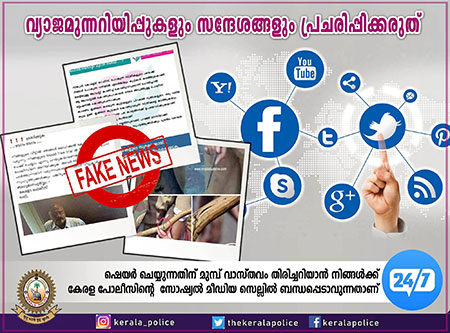 “The reason why the meme pages in Kerala are a huge success is due to Malayali’s love for sarcasm and humour. And one lesson brands can take home from these pages is the way they engage their followers, topical subjects with an essence of humour are always accepted by the people. The brands can converse with people easily with topical content,” said Kishan Kumar, Managing Partner, Wavemaker.

NEONS OOH Conference 2020: How advertisers can aim to be eco-friendly: Dipen Mehta
17 hours ago

In a first, Netflix & Amazon to take the stage at Cannes Lions
18 hours ago

We have positively disrupted our own segment: Byju Raveendran
22 hours ago

Mobile OOH will be a game-changer: Iftekhar Ahmed Siddiqui, iBall
22 hours ago

2020 for media: How to seek opportunities in an uncertain year
5 days ago

Dark days ahead for fairness cream ads in India?
5 days ago

60% of our growth should be organic; 40% from acquisitions or collaborations: Gour Gupta
4 days ago