Your access not for sale, big victory for all internet users, say Industry experts

The fight for net neutrality is finally over, eight months after India’s Telecom regulator came out fluttering in support of the principle of net neutrality. 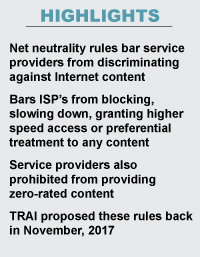 This framework that was published last year is the culmination of a year-long campaign for net neutrality in India. TRAI’s recommendations also pitched for free speech of citizens by ensuring diversity and plurality of opinions, views and ideas. With open internet here to stay in India, looks like there’s more opportunity for small scale businesses to grow without worrying much about their budget and expenditure as the new policy will help create parity among business organisations. India will also witness streamline consumer behaviour as users wouldn’t have to pay extra for more speed and other attractions.

Lauding net neutrality Hina Mittal, Co-founder & CEO of ProfiliAd said, “The new Telecom policy is certainly a thumbs-up strategy for India. More so, startup companies will get equal visibility for there shall be no discrimination. It is certainly a positive impact on the digital infrastructure as the industry is a thriving worth $ 8 billion. Most of our audience is going online these days; hence parity will impact business in our county a lot.”

Commenting on Telecom Commission’s big move, CEO of Social Kinnect Rohan Mehta said, “I am quite pleased with the new policy as the customer won’t be manipulated to make choices based on the service provider’s preference. We look forward to a healthy competition in the market as it gives equal chance to smaller businesses that may not have as deep a pocket compared to the larger business firms. Strengthening the digital infrastructure would facilitate a wave of growth towards districts and tier 3 towns which would further fuel business growth and provide them the impetus they would need to flourish.”

Meanwhile, the Telecom Secretary also announced few measures against violation of the new open Internet rules. It would involve a two-stage process of review and appeal. The new rules include stringent monetary penalties starting at Rs 50,000 per violation per day and capped at Rs 50 lakh depending on the gravity of the violation. Not only this, but also a multi-stakeholder not-for-profit body will be formed to monitor and enforce the rules. We are told, TRAI will be issuing a detailed guideline regarding the same.

Parveez Nasayam, CEO & Managing Director, Xenium Digital Pvt. Ltd backed India’s nod for net neutrality and said, “Quite happy with the news as small vendors will benefit more from their business. Budgets wouldn’t require being big for startups when compared to the larger firms as they can afford to spend lavishly on ads and marketing.” On the other hand Sahil Chopra, Founder & CEO icubesWire said, “The new policy is good but how fair it is for those who have internet to be deciding for people who don’t have one. I would say it doesn’t make a grand difference in here. What is more crucial is with more digitization data security becomes imperative. One needs to take up strong measures against data breach to avoid any violations.”

Surprisingly, while on one side America’s net neutrality rules died last month, India is taking up the cause seriously and gearing up for a free and fair internet service to all its users.