Apple update can stop Facebook from collecting data on users

Apple has previewed macOS Mojave, the latest version of its desktop operating system, with new features and tools. 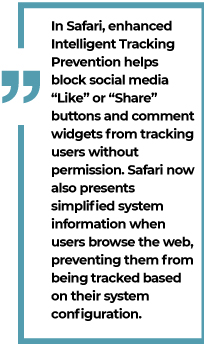 The iOS has taken privacy more seriously. In Safari, enhanced Intelligent Tracking Prevention helps block social media “Like” or “Share” buttons and comment widgets from tracking users without permission. Safari now also presents simplified system information when users browse the web, preventing them from being tracked based on their system configuration. Safari now also automatically creates, autofills and stores strong passwords when users create new online accounts and flags reused passwords so users can change them. New data protections require apps to get user permission before using the Mac camera and microphone or accessing personal data like user Mail history and Messages database. This was part of a slew of announcements made at the annual Worldwide Developers Meet 2018.

Also, in macOS Mojave, a new Dark Mode transforms the desktop with a dramatic new look that puts the focus on user content. The new Stacks feature organizes messy desktops by automatically stacking files into neat groups. Familiar iOS apps, including News, Stocks, Voice Memos and Home, are now available on the Mac for the first time. FaceTime now adds support for group calling, and the Mac App Store gets a full redesign featuring rich editorial content and the addition of apps from top developers, including Microsoft, Adobe and others.

Safari the latest to push back against ad tracking methods that marketers use to monitor internet users. Mozilla Firefox already offers similar protections to users on the browser. Google Chrome has a Do Not Track Me feature in addition to the newly launched native ad-block that was built on user defined ad standards based on research by the Coalition for Better Ads.

Amul has been able to keep it going despite the COVID-19 challenges: R S Sodhi
10 hours ago

BBC, CNN & Euronews donate free airtime worth up to $50M to public health bodies
14 hours ago

62% consumers want brands to continue to talk to them through COVID-19 crisis: Mark Read
20 hours ago

Advertising & marketing industry will come out stronger from this crisis: Ashish Bhasin
22 hours ago