Digital marketing agency Tonic Worldwide is throwing its hat in the ring at Cannes Lions International Festival of Creativity with its #TurnOnTheWoofer campaign. 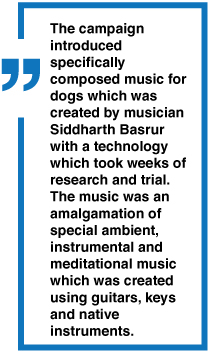 The campaign addresses the need to soothe dogs during the festival of Diwali. The festival of lights turns out to be a nightmare for dogs. With noise levels reaching up to 116.4 decibels, noise pollution during Diwali increases the stress levels in dogs as they hear 4 times more than humans.

Commenting on the entry, Chetan Asher, Founder & CEO, Tonic Worldwide said, “Turn on the Woofer is an initiative by some of our Tonickers who strongly believed in the cause and work closely with the NGO 'Animal Matters to Me' . When causes are close to your heart, solutions come easily. I am proud of my team and having come up with a solution for the problem rather than just another campaign is what makes this special for us. It’s a true blue winner in my mind!"

The campaign #TurnOnTheWoofer introduced specifically composed music for dogs which was created by musician Siddharth Basrur with a technology which took weeks of research and trial. The music was an amalgamation of special ambient, instrumental and meditational music which was created using guitars, keys and native instruments. To ensure it had the maximum impact, special low-level beats and rhythms were used. While the campaign #TurnOnTheWoofer was launched during Diwali, the idea was to create something that not just helps dogs during Diwali but also during other situations such as separation anxiety or bad weather.

The music was played to 150 dogs in the rehab facility of Animals Matter To Me, an animal NGO committed to the welfare of all types of animals.

I have never seen revenue as a challenge: Bharat 24 CEO Dr Jagdeesh Chandra
19 hours ago