Channels such as Asianet News, Mathrubhumi News and News 18 Kerala exhibited unprecedented maturity and responsibility while reporting the Kerala floods

Kerala is getting back to normalcy after the recent flood which devastated the state. The overall damage is estimated to be more than Rs 21,000 crores. According to authorities, 31 per cent of the total flood-hit houses have been cleaned and electricity has been restored for 23.36 lakh connections of the 25.6 lakh disrupted.

The unsung heroes during the floods

The worst flood to hit Kerala in nearly a century bore testimony to how people rose above their differences and put their heart and soul into the rescue operations. The state witnessed exceptional rescue operations under the Indian Army, Indian Navy, Central Armed Police Forces, Kerala Police, Kerala Fire and Rescue services, and National Disaster Response force. The local fishermen of Kerala emerged as the new heroes during the rescue operations. Kerala floods also proved how social media handles can be effectively used, the officials as well as the common public used social media platforms to reach out to people, to spread awareness, and above all to curb the spreading of fake news. Social media platforms became control rooms overnight and with the situation worsening, all groups active on Facebook focused on helping the flood victims and authorities, while suspending their regular activities.

During all this chaos, there are another set of unsung heroes- Malayalam TV channels. They exhibited unprecedented maturity and responsibility while reporting the Kerala floods.

As Dhanya Rajendran, Editor-in-Chief of The News Minute posted on her Twitter handle on 19th August, ‘And I have to tweet about Malayalam channel reporters in Kerala. They have been working under really stressful conditions for days now. But such, calm, effective reporting, not only relaying information but acting as control rooms where people can pass SOS messages’. 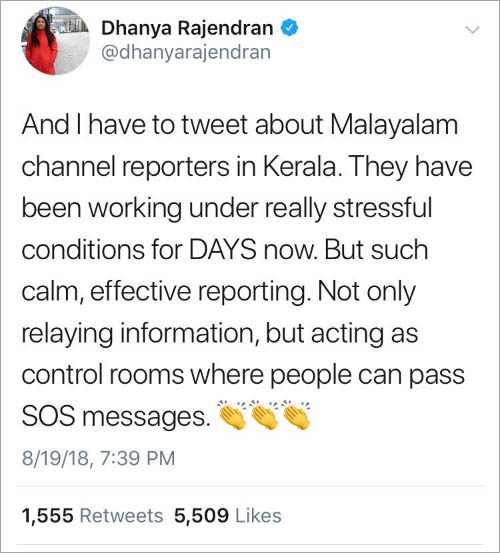 Responsible journalism is the keyword

The Malayalam media exhibited incredible maturity and responsibility during the Kerala flood coverage. The channels pulled out advertisements and 24x7 helplines were opened for the public. Some of the channels went program free. If one word is apt to describe the flood coverage by the Malayalam channels – it is responsible journalism. They made sure that the information from the authorities were passed on to the people correctly, with a focus on curbing fake news. In spite being Onam season, which accounts for 60 per cent of revenue of the media channels, the Kerala media rose above all these to make people the priority. They deployed more reporters and anchors to make sure the facts and figures reached the people. Negative news was given least importance and while being at the 'ground zero', reporters were also actively involved in rescue efforts.

Involvement in the rescue operations

Asianet News went advertisement free during the time of the lood. They opened a 24x7 helpline desk through which people could communicate for help, or to keep updated about the disaster that struck the state. They deployed many reporters for ground reporting and many reporters were stranded in the flood-stricken areas without proper food or accommodation facilities, but that did not deter them from letting the world know of the plight of flood victims.

Talking to exchange4media, Amit Gupta, CEO, Asianet News network said, “We had decided to continuously cover the flood and rescue operations, and drop the ads despite heavy bookings for the festival season. As a responsible media brand, we rose to mitigate the sufferings of the flood victims. Other than sending the 40 tons of relief materials, our staff in Kerala and Karnataka are working around the clock to ensure that the lives of these victims are back to normal. We are in touch with several NGOs that are involved in the rescue operations and we are providing them with the necessary support. Our next focus is to rebuild roads and bridges which have collapsed so that the connectivity is restored in these areas.”

Manorama News focused on compassionate and fact-oriented reporting. Talking to exchange4media, Romy Mathew, Senior Co-ordinating Editor, Manorama News said,” We went for a fact and figures-based coverage. When we deployed reporters in the flood-stricken areas, we firstly assured the safety of reporters and that has been communicated to them. When the situation worsened, we didn’t report on what should have been done or what went wrong instead we focused on what can be done to overcome the situation.” Manorama News also removed the advertisement space and opened 24 hour help desks.

“There was a non-stop flow of calls and messages from people seeking help,” recalls Romy Mathew. The data collected by the help desk were handed over to the government officials and concerned rescue operation teams.

“When the rescue operations were gaining momentum, we also shifted our focus on the health and relief materials required by the victims. We started getting calls requesting for food and other materials and the locations were tracked down and NGOs and the public were informed about the requirements of the people,” added Mathew. The Manorama channel’s reporting team was stranded in Cheruthoni (Idukki District) and Munnar for three days due to landslides.

“They survived on few pieces of bread for these three days and we were planning to airlift them, but they were very brave and came out of the situation with the help of locals and police officials,” said Mathew.

“We weren’t bothered with emphasising who broke the news or whether visuals were exclusive. We made sure only positivity was spread and I believe misconceptions about the news channels of Kerala have been washed away along with the flood,” concludes Mathew.

Mathrubhumi News went advertisement free and pulled out programs and focused on the flood reporting. “We carried out responsible journalism and showed the local, national, and international world the extent of damage the flood has caused in the state ” added Mohan Nair.

News 18 Kerala focused more on curbing fake news and fact-based reporting. They also went advertisement free during the period of calamity.
“The floods were a tough period for all the Keralites, when more reporters were deployed we ensured on the team security,” said Sreelal TJ, National Editor, News 18 Kerala.

Apart from the 24x7 help desk opened for the public, News 18 Kerala opened a helpline to tackle fake news. They gave a helpline number through which people can ensure the authenticity of the news whether through call or WhatsApp.
“We received huge response for this, people were misinformed about the flood situation through different social media platforms and we were able to provide and verify them with facts,” recalls Sreelal.

The News 18 Kerala help desk received calls within and outside India from relatives of flood victims enquiring on the situation. In order to make things smooth, volunteers were allocated by the Disaster Management authority of Kerala.

“Another incident that remains etched in my heart is of some migrant labourers from Odisha who got stranded in the disaster,” recalls Sreelal.

“A group of 50 migrant labourers were stranded in the flood and we have flashed helpline numbers in our other regional language channels as well. The labourers contacted us and requested us to let their family know that they were safe. We contacted our Odiya network and a WhatsApp video of the labours in Odiya language with a message that they were safe was forwarded to our Odiya team. The video was flashed in the regional channel letting the family know about the situation of their loved ones. There are some moments like this which make you feel good about being in this profession,” said Sreelal.

Campaigns to help the flood victims

Another innovative campaign launched by News 18 Kerala was ‘Hridayam Thurakkam Veedu Thurakkam’ (Open your hearts, Open your homes). This campaign asked people to open their houses for temporary accommodation for flood victims.

“We have received a huge response for this campaign. Around 500 calls came to us and we did a four and half hour show in 3 days for this campaign. Even people living in a one room house were ready to accommodate the flood victims. The details of the same were handed over to the concerned authorities,” said Sreelal.

The 2018 Kerala Flood has been the biggest disaster covered and reported by Kerala news channels. When for the first time in the history of Kerala 35 of its 42 dams were opened and all the districts of the state were placed on high alert, the Kerala news channels rose above the occasion. None of them wanted to claim being the one who has flashed the first visuals, none of them were bothered about the exclusiveness of the news. Reports were not about what went wrong or what the authorities should have done, but it was about what must be done and how fast the issues can be tackled; how fast the displaced and stranded people can be moved to safer places, how fast flood relief materials can be provided to those in relief camps. Yes, there were aberrations, but the reportage of the Kerala floods clearly proves how the 15-year-old Kerala news channel media has matured itself with time.

As Vinod K Jose, Executive Editor of The Caravan magazine posted on his Facebook page , ‘Not because I am a Malayalee, but can’t resist saying it-language journalists in Kerala covering the flood must be a case study in J schools. TV, digital and print reported doggedly, with calm and grit, and by doing it, got everyone to act. Owners replaced ads with content.’ 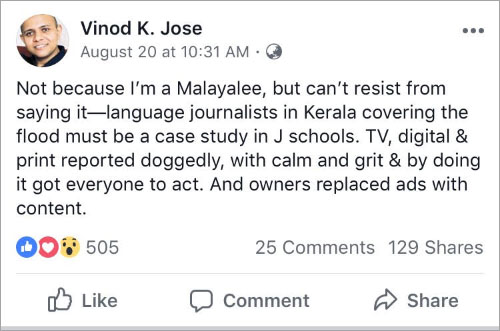