Broadcasters are driving the market, leaving no room for subscribers: Madras High Court

Hearing the TRAI order case, the court held that the premise on which the matter proceeded was not correct as an inflation in the prices and artificial adjustments, which may be called smart business methodology, do not help the cause of the general public and new entrants.

The Madras High Court on Wednesday pronounced its much-awaited judgment on the TRAI tariff order relating to the pricing and packaging of TV channels offered in a bouquet. According to sources, the court approved all proposals of the TRAI order, except the one that puts a cap of 15 per cent on the discount on the maximum retail price of a bouquet. 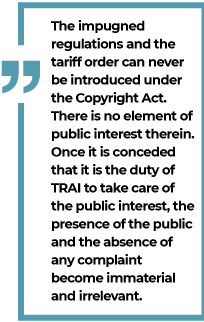 According to a source who attended the hearing, the court held, “Though a submission has been made on the decision arrived at with respect to the fixation of cap at 15% discount on the MRP of the bouquet and the discounts given under the tariff order, the decision cannot be the ground to hold that the ultimate conclusion arrived at on the other issues would necessarily follow suit.”

The judgement was pronounced by a third judge of the Madras High Court. Earlier, a two-member bench of the high court had delivered a split verdict in the case. The two members of this bench were Chief Justice Indira Banerjee and Justice M Sundar. While Justice Banerjee, who was heading the bench, had ruled in favour of TRAI, Justice Sundar had ruled otherwise. The matter was then referred to a third judge.

The petition was filed by Star India and Vijay TV against the TRAI order claiming that content pricing should be left at the discretion of the broadcasters.

The source told exchange4media that the court noted that “there was no need to go into the issue if the impugned regulations and the tariff order touch upon the content or carriage as contended by the petitioners.”

The source added that the court was of the view that “the question if the offering of the channels in a bouquet is market-driven was totally irrelevant. We are not on the reason, logic and rationale behind the impugned regulations.” The court felt that the broadcasters were driving the market by making such offers, leaving no room for any choice to the end user-subscriber.

The court, according to the source, held that the premise on which the entire matter proceeded was not correct as an inflation in the prices and artificial adjustments, which may be called smart business methodology, do not help the cause of the general public and new entrants.

The source further told exchange4media that the court also noted that “the impugned regulations and the tariff order can never be introduced under the Copyright Act. There is no element of public interest therein. Once it is conceded that it is the duty of TRAI to take care of the public interest, the presence of the public and the absence of any complaint become immaterial and irrelevant.”

“Only because the petitioners are affected, the impugned regulation and the amendment would not partake the character of content,” the court held. 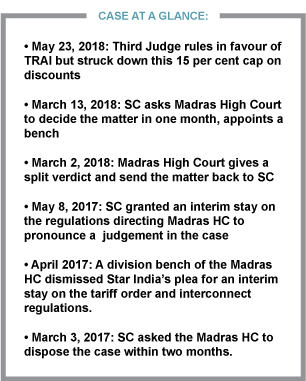