Private FM channels seem to be still evaluating the Information and Broadcasting ministry’s decision to allow them to broadcast All India Radio (AIR) News.

Earlier this month, when I&B Minister Rajyavardhan Rathore made the announcement it was anticipated that private FM channels, who had for long been demanding that they be allowed to broadcast news, would jump at this opportunity to widen the content played on Radio stations.

However, even though 242 stations have registered with the News Services Division: All India Radio (as per data available on their website), most operators are still evaluating this proposition.

A Step Forward or Backward
If you were to tune into any FM radio station in India, what stands out is the lack of diversity in content as the same music makes its way onto the playlist of every station. Thus, news as part of the programming will provide variety.
Most Radio networks in India are part of large media houses but they are not able to leverage this opportunity to curate the news from the parent company. In addition, carrying the same syndicated AIR news bulletins across networks would not help create exclusivity in content.

If one were to look back, in November 2008, the Telecom Regulatory Authority of India (TRAI) had recommended that private FM radio be permitted to broadcast news. The radio networks were allowed to source news from AIR, Doordarshan, authorised TV news channels, UNI, PTI or any other authorised news agency. But in July 2011, the government changed the FM policy guidelines and allowed only AIR news – without any addition or modification – on private FM.

Industry Reactions
Uday Chawla, Secretary General, Association of Radio Operators for India (AROI), said, “The airing of All India News by FM radio stations is part of the Phase III policy. The entire Radio industry has been asking for total freedom of news on radio but the Government was not keen on it as it believed it would be difficult to monitor Radio stations.”

Even though many radio operators have registered to broadcast AIR news, most of them are still evaluating whether to carry AIR news or not.

Prashant Panday, MD & CEO of Entertainment Network (India) Limited (ENIL), which runs Radio Mirchi, said: “We are still evaluating this. It is unlikely we will broadcast though. I don’t see any pros at all in carrying AIR news, but I see a lot of cons. The biggest is that this amounts to private FM broadcasters amplifying the voice of AIR. Why should we? We are well equipped to source our own news bulletins. We use these bulletins to bring out newspapers, run TV channels etc. Why can’t we run the bulletins on our radio stations? Yes, if the government wants us to broadcast their news, we can treat them as advertisers and charge them our regular commercial rates.”

Nisha Narayanan, COO, RED FM said: “For the government to acknowledge that FM programming is incomplete without news is, I suppose, a step forward. But for them to insist that we carry only syndicated AIR news, and that too only “national” bulletins in Hindi and English, is a couple of steps backwards. FM stations pride themselves on their unique content and style of delivery, and this differentiation is particularly seen in the non-music elements of programming. To relay the same AIR news bulletins on all private FM channels at the same time (maximum 30 minutes deferred), especially in regional markets where they speak neither Hindi nor English, would completely defeat the purpose and damage our content fabric.”

Asheesh Chatterjee, CFO, BIG FM, said, “Radio as a platform can be a one-stop shop destination for all valuable information. On our part, we are evaluating how we can integrate the news bulletins within our FPC (fixed point chart) so that it is seamless for our listeners.”

Rahul Namjoshi, Business Head MY FM said: “We are still evaluating the proposal. However, at the outset we aren’t keen to carry AIR news bulletin, we are part of a reputed news group and would like to source news from there and package it in our style.”

The First Step
Although radio operators may not be keen on broadcasting AIR news, Chawla said it was the first step forward, given that the industry has been demanding broadcasting of news for close to 15 years now.

“The position that has been adopted is to take a step-by-step approach for news on Radio. The Government has also accepted not to charge for AIR News in the initial period (though it had proposed charging for the AIR news shared). From a strategy point of view, the first step forward is for FM channels to broadcast AIR news. As an industry body, we want total liberation and freedom of news but the only way forward is to go step by step and we have taken the first step.”

Meanwhile, Panday said, “If the government wants to allow us news, they can do it with the stroke of a pen. The government must have confidence in us. We are all responsible organisations.”
While creating a time slot for the bulletins is possible by altering the programming, what also needs to be looked at is monetisation. Chatterjee said Big FM could look at RJs leading into and out of the news bulletin which could be monetised.

Narayanan added: “By broadcasting AIR news bulletins along with their commercials–and some of those bulletins are 15 minutes long—we will not only incur huge opportunity costs, but the lack of our own sponsors will directly impact our bottom-line…The issue is mainly one of opportunity costs and loss of channel identity. AIR broadcasts 15-minute and 5-minutes news bulletins, on top of the hour, which is a pretty critical time for our programming. You really can’t start the clock every hour on a private FM channel with someone saying, “This is All India Radio…” What must be added here is that the channels have the liberty to choose the bulletins, including the duration, and the number of playouts that it wants to broadcast.

As per the initial policy, the Government’s intent was to offer AIR News to operators at a sliding fixed tariff which could range from Rs 2 lakh to Rs 50 lakh a year. At the moment, the news broadcast is free of cost on a trial basis till May 31. Asked about what could happen post May, Panday said, “Prasar Bharati hasn’t clarified. But, there is no question of us paying anything at all.

Chatterjee added: “Most FM stations will find it hard to integrate AIR news into their FPC and will only be doing it largely for consumer welfare, citizen awareness and democracy. This initiative will only be viable till such time that AIR news is available free of cost. The real step forward will be when the station is able to curate its own news.”
On its part, AROI is ready to take the next step forward. “We are waiting for feedback from the broadcasters. AROI will take up with the government any amendments, as suggested by the stations, such as having the RJs of the stations read the scripted news. This is currently not allowed in the policy and is a decision that has to be taken by the Union Cabinet,” Chawla said.

While the the Government is silent on the pay structure after May, radio operators are in consensus that expecting them to pay is unrealistic.

However, the point to remember is that there may be a new government in place post the national elections and the new dispensation could choose to go ahead with the current policy and eventually allow private players to curate and produce their own news or roll back on the decision to air news, which would mean that it will be all back to square one. 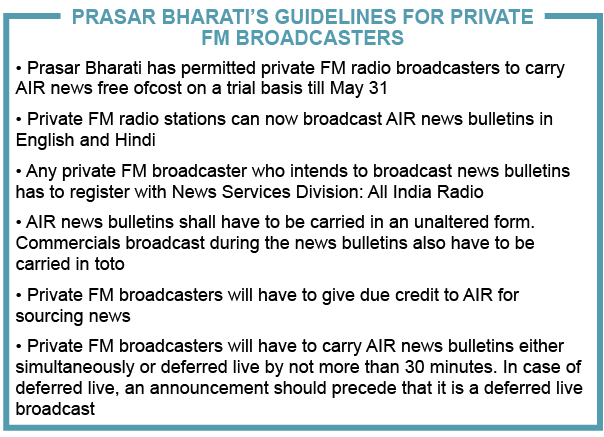 In its first video campaign, Rapido gives #PromiseofProtection
7 hours ago

Are you still wondering #KahanGayiCadbury?
13 hours ago